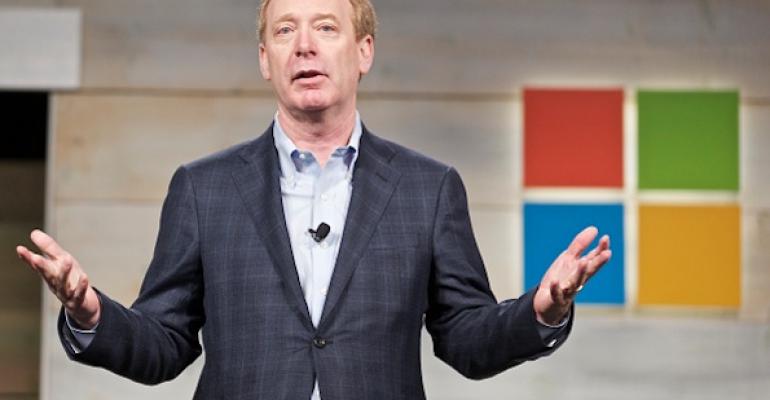 Last week the New York Times reported that during the administration of former President Donald Trump , the U.S. Department of Justice demanded records from Apple relating to two Democrats on the U.S. House Intelligence Committee. CNBC reported Microsoft received a confidential request for the personal emails of a Congressional staffer. Both companies were under nondisclosure orders that prevented them from talking about or alerting the subjects of the data seizures.

The U.S. government should change the rules so that people whose data is being demanded can be informed and choose whether to file a legal challenge to the subpoenas, Smith said Monday in an interview with Bloomberg Television. Microsoft in 2016 filed a case against the DOJ related to the gag orders, and a year later the department issued new guidelines it said would scale back the practice of these kinds of confidential requests.

“If we fail to do so, we undermine longstanding fundamental freedoms in the country and, frankly, for those of us in the tech sector, we’re put in the middle,” Smith said. “This should be an issue where the government has to go most of the time to the individuals whose information they are seeking.”

It’s a concern that has been raised with the Biden administration by European leaders, Smith said. “They want to see new assurances and safeguards that the U.S. government isn’t going to go to a U.S. court to ask a U.S. company to turn over data that belongs to Europeans, and until we get that sorted out it is basically holding back in our view the tech sector in Europe.”

In the interview, Smith said he expects to see additional regulation on the biggest technology companies in both the U.S. and Europe. Last week, House Democrats and Republicans introduced a series of bills that would place significant new constraints on how tech platforms run their businesses and give antitrust enforcers more legal authority. One proposal would require Amazon.com Inc., Apple and other U.S. technology giants to sell or exit key businesses. Smith said aspects of some of the bills “absolutely” would apply to Microsoft. Still, other parts mainly relate to some of the Redmond, Washington-based company’s rivals.

“In many ways where this is going is a particular focus on technology platforms that serve as gatekeepers -- they not only serve as a platform like an operating system, but people need to go through them to sell their commerce, whether it’s a product that’s on Amazon, or an app, say, in the Apple App Store, or through a service like Google search,” he said. “That’s where we’re going to see more and more government focus.”

Smith also said Microsoft, the world’s largest software maker, will continue to engage with co-founder Bill Gates on certain issues, if that contact can be handled responsibly. In the wake of Gates’s announcement that he and his wife, Melinda French Gates, are divorcing, reports have surfaced about potentially inappropriate conduct by Gates toward Microsoft employees.

The company has said it received a complaint in 2019, while Gates served on Microsoft’s board, that he attempted to start a romantic relationship with an employee in 2000. The Microsoft board investigated, a probe that wasn’t concluded because Gates opted to step down as a director last year. Gates still serves as an adviser to Microsoft Chief Executive Officer Satya Nadella, and in that capacity he participates in occasional product reviews, including in meetings with other employees.

“You’ll see us continue to talk to Bill in an appropriate way on issues that matter,” Smith said, citing the example of climate change -- Microsoft has an aggressive carbon-reduction goal, and Gates has written a book about the topic and is investing billions in the industry. “Where there are opportunities for us to work together in an appropriate way, in a way that’s sensitive to all of the issues that people have raised, we will continue to benefit from his advice.”

Microsoft's Brad Smith: "What We Need Now Is A Digital Geneva Convention"
Feb 14, 2017

Brad Smith on the Microsoft's new mission — and a more humble culture
Jul 20, 2016