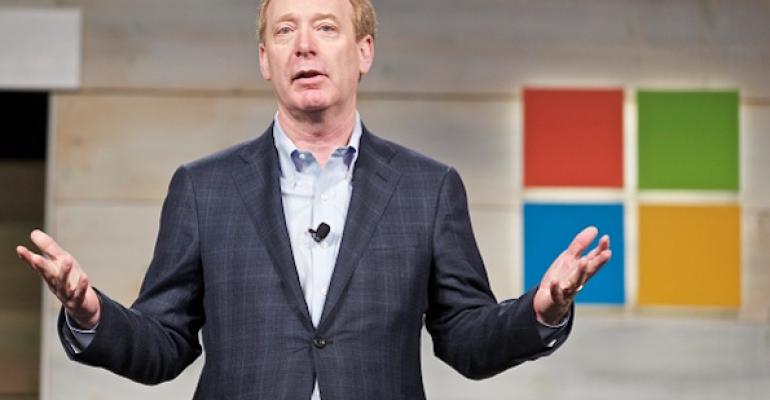 ICYMI: Microsoft Is Suing the Government for Privacy Rights (April 15, 2016)

Hello! The bottle opener was invented on this day in 1738, so make it your mission to go out and celebrate that anniversary with gusto.

The biggest story of yesterday: Microsoft is suing the U.S. government.

Why? As Microsoft president and chief legal officer Brad Smith wrote in a blog post:

We believe that with rare exceptions consumers and businesses have a right to know when the government accesses their emails or records. Yet it’s becoming routine for the U.S. government to issue orders that require email providers to keep these types of legal demands secret. We believe that this goes too far and we are asking the courts to address the situation.

How routine is it? Consider what Microsoft says it's been dealing with over the last 18 months:

The U.S. government has required that we maintain secrecy regarding 2,576 legal demands, effectively silencing Microsoft from speaking to customers about warrants or other legal process seeking their data. Notably and even surprisingly, 1,752 of these secrecy orders, or 68 percent of the total, contained no fixed end date at all. This means that we effectively are prohibited forever from telling our customers that the government has obtained their data.

We believe these actions violate two of the fundamental rights that have been part of this country since its founding. These lengthy and even permanent secrecy orders violate the Fourth Amendment, which gives people and businesses the right to know if the government searches or seizes their property. They also violate the First Amendment, which guarantees our right to talk to customers about how government action is affecting their data. The constitutional right to free speech is subject only to restraints narrowly tailored to serve compelling governmental interests, a standard that is neither required by the statute being applied nor met by the government in practice here.

So Microsoft has filed suit against the Justice Department, saying that Section 2705(b) of the Electronic Communications Privacy Act gives too much power to the U.S. government and violates the constitutional rights of Americans. There are also very real business impacts to these government queries. In an interview, Smith pointed out:

Microsoft is committing to the principles that its customers have a right to data privacy and that the U.S. government's right to search its customer data is extremely narrow and extremely specific. In late 2014, company had gone up against the DOJ in a court case arguing that U.S. data assets stored in Ireland should not be subject to U.S. search and seizure, and granting the U.S. government the right to access assets stored in another country sets the legal precedent that other countries would have the right to rifle through assets stored on U.S. soil. By last fall, Smith was writing:

Privacy rights cannot endure if they change every time data moves from one location to another. Individuals should not lose their fundamental rights simply because their personal information crosses a border.

Add to this the daily reality that personal data is often moved not by individuals, but by companies and governments. Typically, individuals are not even aware of where their information is being moved or stored. It is untenable to expect people to rely on a notion of privacy protection that changes every time someone else moves their information around. No fundamental right can rest on such a shaky foundation.

He has been advocating for one simple principle: A user's legal rights moves with their data. Today's suit (the court filing, in PDF format), which seeks to notify users when the U.S. government wants access to their data, puts forth the idea that users have the right to data privacy wherever that data happens to be.

The most useful news:

Five reasons why you shouldn't switch to the Microsoft Edge browser yet.

Visit Microsoft's site so you can remove an old device from your Microsoft account.

Stop Windows 10 from gobbling so much data.

And here's what we've been publishing:

Microsoft Begins Notifying Users Who Will Lose their 15GB of Free Storage — If you failed to take advantage of Microsoft's earlier offer to retain your 15GB of free cloud storage and the 15GB Camera Roll if you had that then you have until 13 July 2016 until your storage drops down to just 5GB.

How To Use Windows Reliability Monitor — This tool will retrieve logs that are automatically generated on your Windows system about app failures, Windows failures, warnings and general information applying to app/system updates and display them in a customizable chart so that look by date and time for errors. This can help you track down the cause of system crashes or other errors you are seeing on your computer.

Windows 10 Insider Preview Build Tracker for 2016 — Keep track of the Windows 10 Builds that have been released in 2016 for Mobile devices.

Q. How do I keep ransomware out of my backup files? — Because ransomware looks for data files to encrypt but otherwise leaves your system running, I think that renaming my backup files to backup.exe should make them safe. Is this a good idea?

Microsoft Band: Cardio Minutes Versus Cardio Duration — The leaderboard does not record total cardio activity duration (though the Band does track it), but only cardio minutes, meaning you’ll need to do more than just walk around your office to get credit.