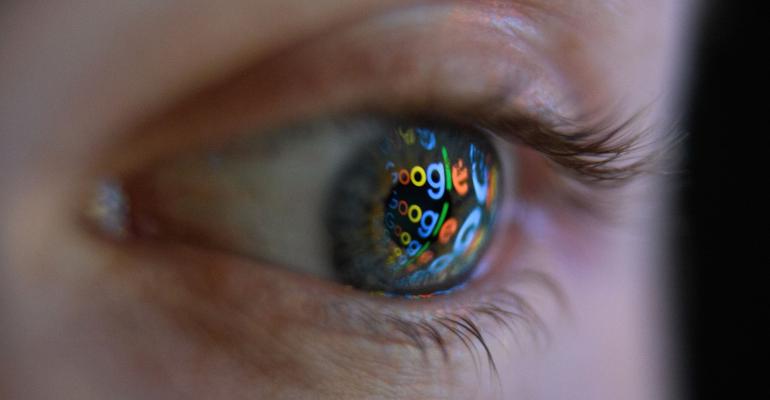 Google Is Sharing Our Data at a Startling Scale

A new report from the Irish Council for Civil Liberties says Google transmits the location data and browsing habits of Americans and Europeans more than 70 billion times daily, across both regions.

(Bloomberg Opinion by Parmy Olson) -- Along with the Pixel phones, watches and earbuds at Google’s annual showcase of software and devices last week came a pair of nifty-looking translation glasses. Put them on and real-time “subtitles” appear on the lenses as you watch a person speaking in a different language. Very cool. But the glasses aren’t commercially available. It’s also unlikely they will make anywhere near as much money as advertising does for Google’s parent, Alphabet Inc. Of the company’s $68 billion in total revenue from the quarter ending March 31, 2022, about $54 billion came from advertising.

The scope of our own, oblivious involvement in that business is also incomparable with any other time in history.

Each time you open an app on your phone or browse the web, an auction for your eyeballs is taking place behind the scenes thanks to a thriving market for personal data. The size of that market has always been hard to pin down, but a new report from the Irish Council for Civil Liberties, which has aggressively campaigned for years in the U.S. and Europe to put limits on the trade of digital data, has now put a figure to it. The report, which the council shared with Bloomberg Opinion, says ad platforms transmit the location data and browsing habits of Americans and Europeans about 178 trillion times each year. According to the report, Google transmits the same kind of data more than 70 billion times daily, across both regions.

It is hard for humans to conceptualize such numbers, even if machines calculate them comfortably everyday — but if the exhaust of our personal data could be seen in the same way pollution can, we’d be surrounded by an almost impenetrable haze that gets thicker the more we interact with our phones. Quantified another way: By way of online activity and location, a person in the U.S. is exposed 747 times each day to real-time bidding, according to the data. The council says its unnamed source has special access to a manager of an ad campaign run by Google. (The figure doesn’t include personal data transmitted by Meta Platform Inc.’s Facebook or Amazon.com Inc.’s ad networks, meaning the true measure of all broadcast data is probably much larger.)

Why does any of that matter? Apps are mostly free and useful after all, and there are no obvious negative consequences to being digitally mined for data.

Except, there have been. At least one large advertising network has admitted to passing user data on to the Department of Homeland Security and other government entities to track mobile phones without warrants, according to a recent Wall Street Journal report. The precise movements of people who used the gay-dating app Grindr were also made publicly available to buy from a mobile-advertising company, until Grindr stopped sharing location data with ad networks two years ago. But last year, a Catholic news publication The Pillar was still able to track the location of a priest on Grindr using “commercially available records” of data from the app, and watched him travel between his office, home and various gay bars before publishing a story about his “serial sexual misconduct.” It’s still unclear how The Pillar got that information, but Grindr said at the time that an advertising partner could have been the source.

The stakes are now higher with the prospect of a widespread abortion ban in the US. What if state prosecutors start using phone data to root out supporters of abortion or even women who order abortion pills online?

Capturing sensitive data is possible thanks to the wild and messy world of real-time bidding, a hugely popular approach to digital advertising and part of the lifeblood of companies like Google and Facebook. Here’s how it works: Each time a smartphone user opens an app or website that shows ads, their device shares data about that user to help show them a targeted ad. The advertiser with the highest bid for the available ad space wins.

The data can go to dozens or even hundreds of companies for each auction. Google says it transmits the data of American users to about 4,700 companies in total across the world. Each “broadcast” — as they are called in the industry — typically shares data about a person’s location —including “hyperlocal” targeting, according to Google own pitch to advertisers — personal characteristics and browsing habits to help ad firms build user profiles. The ad industry also has a lengthy taxonomy that the networks use to categorize people, including sensitive labels like “anxiety disorders” and “legal issues,” or even “incest” and “abuse support,” according to a public document published by the ad network consortium that sets standards for the industry.

The complex and murky nature of the multibillion-dollar online ad business makes it difficult to know precisely what data Google is sharing about us. For what it’s worth, Google tends to broadcast less personal data about people than other smaller advertising networks do, according to Jonny Ryan, a senior fellow at the council who oversaw the compilation of the latest data. But Google also makes up the biggest share of broadcast data, he added.

The sheer size of data broadcast each day is not a fun fact: It underscores the reality that we are surrounded by devices that collect information, ostensibly to make our lives better but which is then sold to the highest bidder. Smart speakers, fitness trackers and augmented-reality glasses are just a few examples of the growing trend of ambient computing. The data collected by those devices can be exploited in ways we don’t know. Last week, Vice reported that the San Francisco Police Department had sought footage from General Motors Co.-owned Cruise, a self-driving car company, to help with investigative leads. The SFPD denied it wanted to use that footage for ongoing surveillance.

Even so, more data broadcasting means greater chances of misuse. Even when the purpose is as innocuous as advertising, ambient computing runs the risk of turning into ambient surveillance.