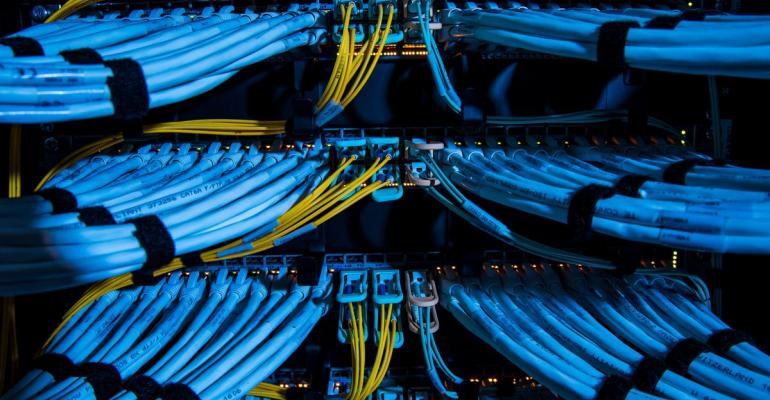 Fiber optic cables, center, and copper Ethernet cables feed into switches inside a communications room at an office in London, U.K., on Monday, May 21, 2018. The Department of Culture, Media and Sport will work with the Home Office to publish a white paper later this year setting out legislation, according to a statement, which will also seek to force tech giants to reveal how they target abusive and illegal online material posted by users. Photographer: Jason Alden/Bloomberg
Data Center

Goldman Sachs-backed AirTrunk has raised A$850 million ($618 million) to fund the expansion of its two Australian datacenters and a move into Asia to take advantage of a growing cloud computing market.

(Bloomberg) -- Goldman Sachs-backed AirTrunk has raised A$850 million ($618 million) to fund the expansion of its two Australian datacenters and a move into Asia to take advantage of a growing cloud computing market.

Deutsche Bank AG underwrote a senior secured loan that will eventually be syndicated to a broader group of lenders, the Singapore-based startup said in a statement Monday. Its latest financing comes on top of a A$150 million six-year term loan from ING Groep NV and Natixis SA secured in February 2017, plus an unspecified amount of funding from Goldman Sachs Group Inc. and an arm of private equity giant TPG.

AirTrunk’s taking advantage of a surge in cloud computing as companies that once ran in-house servers shift storage and processing off-site. AirTrunk provides its clients with the physical space, internet connections, power and cooling for their own servers. Research firm IDC estimates public cloud demand in the Asia Pacific region excluding Japan will hit $47 billion by 2020.

The bulk of the money raised in loans, about A$750 million, will be spent expanding its current facilities in Sydney and Melbourne, AirTrunk founder Robin Khuda said. AirTrunk, which measures inventory in terms of power capacity, will have 174 megawatts within 12 months, of which 100MW will be built up and ready for customers. The rest is made up of land that can be upgraded as needed.

The remainder of the money raised will go toward expanding into Asia with Singapore, Tokyo and Hong Kong key priorities. Facilities in the region are expected to be online by end-2020.

“Our Australian business grew faster than expected so it’s been a sizeable focus and key priority,” he said. “In the next three years I wouldn’t be surprised if we made an additional A$3-5 billion in investments.”