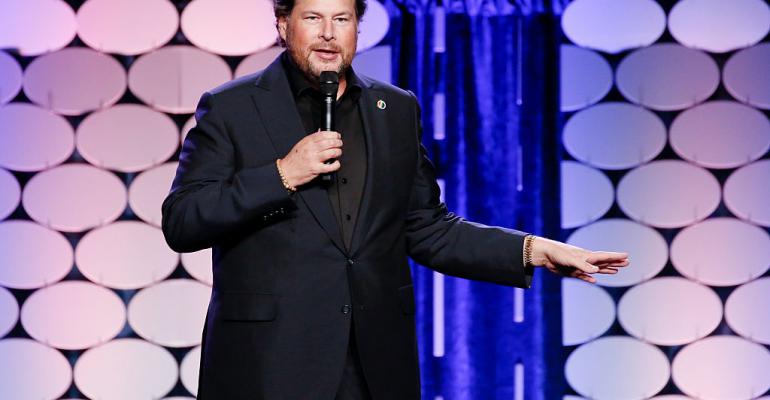 Salesforce shares fell as much as 3.4 percent to $149.50 Thursday in New York, the biggest intraday decline in a month. The stock has surged about 50 percent so far this year.

Profit, excluding certain items, will be as much as 50 cents a share in the current quarter, the San Francisco-based company said Wednesday. That compared with analysts’ average estimate of 53 cents, according to data compiled by Bloomberg.

Unearned revenue, a measure of future sales from existing deals that have been invoiced, was $5.88 billion as of July 31. Analysts pay close attention to this number because it indicates future subscription revenue. The latest figure was close to Wall Street expectations, but that’s often not enough for Salesforce, which has a high-flying stock and a history of beating analysts’ estimates.

“It’s a combination of third-quarter profit guidance and the unearned revenue number came in just in line,” said Tom Roderick, an analyst at Stifel.

Salesforce shares fell as much as 3.4 percent to $149.50 Thursday in New York, the biggest intraday decline in a month. The stock has surged about 50 percent so far this year.

Still, many analysts on Thursday reiterated their “buy” ratings, with several raising their price targets for the company stock. “The guidance seems conservative to us,” Richard Davis, an analyst at Canaccord Genuity Inc., said in a view shared by several others.

Salesforce, known for software that manages customer relationships, has broadened its focus and sought larger corporate clients while chasing a sales goal of $23 billion by fiscal 2022. The company recently bought Datorama Inc. and said it will spend billions of dollars to expand internationally. The strategy has paid off, but growth has come at a cost.

The timing of Salesforce’s extravagant Dreamforce annual conference will crimp profit in the current quarter, co-Chief Executive Officer Keith Block said in an interview. “Dreamforce is in the third quarter versus the fourth quarter last year,” he said. The conference is one of the world’s largest tech shows, with more than 100,000 visitors expected this year.

Salesforce said in June it would inject more than $2.5 billion into its U.K. operations over the next five years, the latest in a string of investments to bolster international growth.

Wednesday’s results were the first for the company with co-CEOs, after Block was promoted earlier this month to join co-founder Marc Benioff in the position. Block will continue to oversee Salesforce’s daily operations and sales. Benioff, who retains his role as board chairman, will focus on vision and culture.

Sales will be as much as $3.37 billion in the current quarter, the company said in a statement. Analysts on average projected $3.35 billion, according to data compiled by Bloomberg.

Salesforce has expanded its products from a program for sales representatives to track and pursue their leads into a sprawling software suite that helps corporate customers manage relationships with consumers through service, marketing and e-commerce tools. The company is striving to become a top source of internet-based software for all kinds of business processes, putting it in closer competition with Adobe Systems Inc. and Oracle Corp. These programs were once run by companies on their own computer servers, but the software is increasingly accessed via the internet.

The company’s rapid growth has made it popular with investors and analysts. Bank of America Merrill Lynch, Sanford C. Bernstein, BMO and BTIG raised their price targets or recommendations for the company’s stock in the last two months.