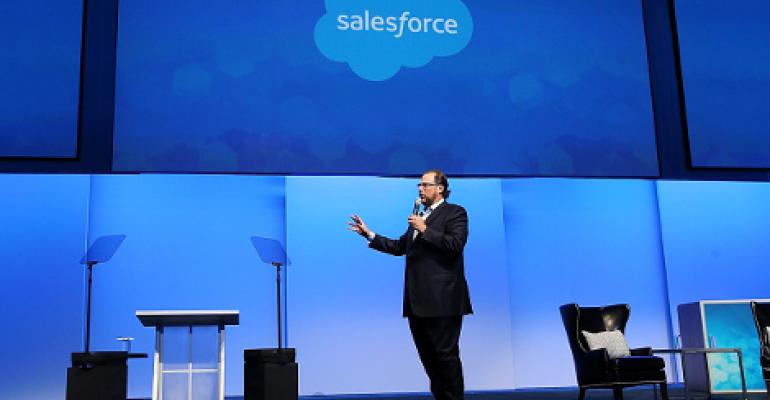 Salesforce Dreams of Being Microsoft or Oracle

Salesforce wants to become a sprawling supermarket like Microsoft or Oracle Corp. that offers more types of technologies that companies need. The Tableau acquisition — along with Salesforce’s purchase last year of software-integration firm MuleSoft and its failed acquisition of LinkedIn a few years ago —  show that Benioff and his company aren’t afraid to splurge to reach into more corners of business technology.

(Bloomberg Opinion) -- Salesforce.com Inc.’s latest acquisition shows yet again that Marc Benioff’s company has the ambition to become a more sprawling software superpower and is willing to pay a steep price to get there.

The company announced on Monday a deal to buy Tableau Software Inc. in a stock swap that values the younger software firm at $15.3 billion. Tableau’s software allows companies or their employees to wrangle data about their businesses, make sense of it through charts or other visuals and then use the information to make better decisions. This is a growing area of business software, with Microsoft Corp., Google and others all trying their hand at what is broadly called business intelligence.

Tableau has been a presumed acquisition target for some time, and documents hacked in 2016 from an in-box of a Salesforce director showed Tableau on a list of apparent company acquisition targets. Salesforce paid a considerably steeper price that it would have in 2016. The purchase price is a 42% premium to Tableau’s share price on Friday and works out to about 9.4 times Tableau’s estimated revenue for 2020. On a similar basis, Salesforce’s market value is 6.4 times the revenue estimates for its fiscal year ending in early 2021.

It’s not unusual for Salesforce to pay rich prices for deals, and a recent Bloomberg News article showed how Benioff — the co-founder and co-CEO — makes leaps of logic in dealmaking. The company can argue that it can afford to pay relatively rich prices because it can turbocharge growth of acquired companies by pitching their software to Salesforce’s large base of customers.

At first blush, the Tableau acquisition is an odd strategic fit. Tableau differs from Salesforce in its embrace of more traditional corporate software approaches. Salesforce has also typically sold software to sales and marketing departments inside of companies, and Tableau tends to appeal to different corners of companies.

In a conference call on Monday with stock analysts, Benioff correctly noted that Salesforce has been broadening its product offerings. He also said that executives want to turn to Salesforce for more of the technologies they need to modernize how they operate, and Tableau is one more essential asset that Salesforce will be able to offer for business transformation.

That comment is a sign of Salesforce’s ambitions in this Tableau deal and beyond. Salesforce wants to become a sprawling supermarket like Microsoft or Oracle Corp. that offers more types of technologies that companies need. The Tableau acquisition — along with Salesforce’s purchase last year of software-integration firm MuleSoft and its failed acquisition of LinkedIn a few years ago —  show that Benioff and his company aren’t afraid to splurge to reach into more corners of business technology.

That ambition, however, means Salesforce will more and more butt heads and try to match wallets with the likes of Microsoft, Amazon and other companies that make Salesforce look like a relative pipsqueak. It isn’t easy to go up against the biggest of the big software titans. And as Salesforce showed by flirting several years ago with a potential takeover of Twitter Inc., the company’s ambitions may not always be sensible.

The stock reaction to the Tableau deal reflects the potential risks of Salesforce’s ambition. Shares were down more than 4.5% on Monday morning. Tableau is the largest deal Salesforce has ever made, both in total value and in the share of its market value. The $15.3 billion deal, based on Salesforce’s closing share price on Friday, is about 12% of the company’s market capitalization.

Salesforce also told investors that buying Tableau would dent Salesforce’s adjusted operating profit margins. When Benioff was asked on the conference call about the hit to margins, he pointed to Salesforce track record of consistently increasing cash flow and operating margins based on the company’s adjusted figures.

The timing might be a coincidence, but Google parent company Alphabet Inc. last week also announced an acquisition of a company with software similar to Tableau’s. Given the timing, it’s worth wondering whether Tableau and Looker, which Google is set to acquire, were on the market at the same time and both Salesforce and Google took a look. Competitive bidding for Tableau might explain why Salesforce’s purchase price is such a significant premium to where Tableau shares closed on Friday.

Salesforce has always been inseparable from Benioff’s vision, his whims and his mission. Shareholders have been richly rewarded as Salesforce has cemented itself as a fast-growing company fueled by acquisitions and driven by its status as an indispensable technology for sales departments. Expensive, strategically head-scratching dealmaking is the price of Salesforce’s ambitions.