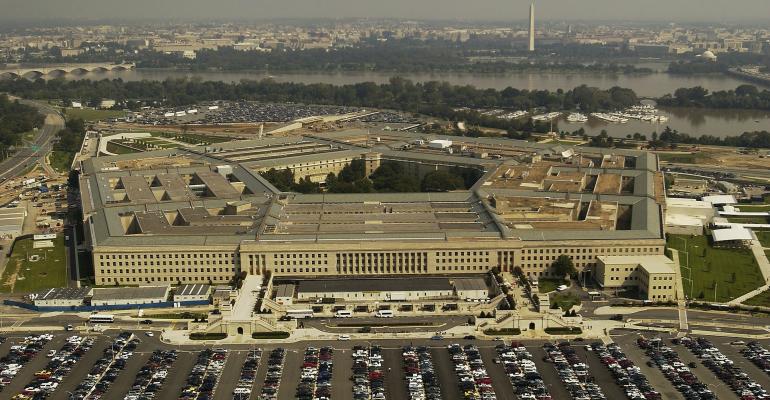 The Pentagon opened a winner-take-all competition Wednesday for a multibillion-dollar cloud services contract, a move that industry groups representing rivals including Oracle Corp. and Microsoft Corp. have said would favor Amazon.com Inc.

(Bloomberg) --The Pentagon opened a winner-take-all competition Wednesday for a multibillion-dollar cloud services contract, a move that industry groups representing rivals including Oracle Corp. and Microsoft Corp. have said would favor Amazon.com Inc.

A draft request for proposals issued Wednesday sought industry input for a two-year base contract with options for renewal over eight more years. A final request would be released in early May with a contract award as soon as September, officials told industry representatives in a briefing near the Pentagon in Washington’s Virginia suburbs.

Defense Department officials said the cloud-computing contract is needed to allow worldwide communications among U.S. forces in different military services and commands. While no estimate of the contract’s value was offered, the Pentagon’s scope -- 3.4 million users and 4 million devices -- hints at the massive size of the award.

“Whichever one of you wins this, I’m challenging you to bring your ‘A Game,’" Air Force Brigadier General David Krumm, deputy director for requirements for the Joint Chiefs of Staff, told the gathering. “This is going to make a difference like few things have to get data to our war-fighters when and where he or she needs it.”

Cloud services -- in which computing power and storage are hosted in remote data centers run by a third-party company rather than on-site in locally owned machines -- can range from powering email and storing personnel files to running complex decision-making algorithms. The Pentagon said it’s making the shift to the cloud to strengthen its use of emerging technologies, including artificial intelligence, machine learning and the internet of things.

Having already won two other government cloud contacts, Amazon Web Services is widely perceived as the front-runner for the Defense Department award. Industry groups had called for multiple contract awards, which could improve the opportunities for companies including Oracle, Microsoft, Alphabet Inc.’s Google and International Business Machines Corp.

Without directly commenting on Amazon’s potential edge for the contract, Chanda Brooks, a Pentagon contracting officer, told the gathering Wednesday that market research shows that multiple companies are capable of meeting the requirements. She said the “full and open competition” would result in a single award.

But Roger Waldron, president of the Coalition for Government Procurement, which represents defense contractors including Oracle, IBM and Microsoft, said “going to a single vendor closes the market to just that vendor for a decade.”

Sam Gordy, general manager of IBM U.S. Federal, said, “The Pentagon would never limit the Air Force to flying only cargo planes for every mission. Locking the entire U.S. military into a single, restrictive cloud environment would be equally flawed.”

Amazon already has a cloud contract with the U.S. Central Intelligence Agency dating back to 2013 that’s valued at $600 million. The online retail giant led by Jeff Bezos has the fastest-growing lobbying arm among tech companies and has spoken to the Pentagon about cloud or procurement since at least 2016, according to federal lobbying disclosures.

Oracle has a particular interest in how the contract is awarded because it has long-term contracts with multiple government agencies that use its flagship database to store information on their own systems. As the agencies look to switch to cloud computing and eye market leader Amazon, these moves threaten Oracle’s traditional revenue sources. Oracle has tried to protect its database business by offering cloud services of its own, but has come late to that market.

Technology companies worried that the Pentagon favors Amazon point to the decision in early February to award a contract of as much as $950 million to REAN Cloud LLC, an Amazon partner, to help migrate its data to the cloud. On Monday, the Pentagon said it was unaware of the award, made by its Silicon Valley-based innovation unit, and reduced the contract to $65 million.

In a statement Wednesday, Sekhar Puli, REAN Cloud’s managing partner, said that “based on the threat of legal action and protest by the old guard, the only winners in this delay are those large companies that stand to lose money if the DoD proceeds with innovation. In the meantime, the cost of maintaining antiquated government infrastructure has not subsided.”

Oracle formally protested the REAN contract in February, saying the company was opening a door for Amazon Web Services and asserting that Amazon pressures clients to use REAN, according to a person familiar with the filing.

The companies competing for the Defense Department contract are expected to put their respective strengths on display as they present bids. While Amazon is the leader in cloud services, Mountain View, California-based Google emphasizes its focus on security and Redmond, Washington-based Microsoft touts its ability to move existing databases onto the cloud in stages, while keeping some tasks and data in-house if the customer wants.

The transition to the cloud could threaten on-site database providers such as Redwood City, California-based Oracle and IBM, based in Armonk, New York, that have long supplied government technology products but were later entrants into the cloud market.

“For Oracle and IBM, any government contract feels important. They’re entrenched government vendors," said Lydia Leong, a cloud analyst at Gartner. “Shifts to the cloud and going off of their architecture is not a happy situation for them.”