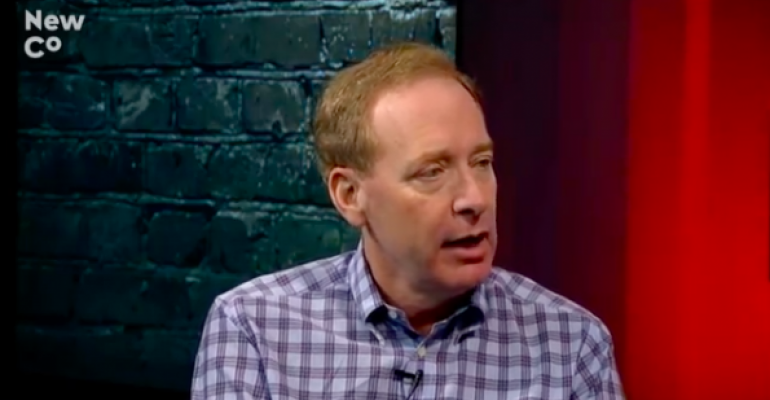 “The reality is that Google has fundamentally sucked most of the oxygen out of the opportunities for people who create content to actually earn a living through advertising,” said Smith, who is Microsoft’s president and chief legal officer.

“The reality is that Google has fundamentally sucked most of the oxygen out of the opportunities for people who create content to actually earn a living through advertising,” said Smith, who is also Microsoft’s chief legal officer, in a Bloomberg Television interview. “It’s interesting to just look at what has happened to what was supposed to be an open web -- that was the promise of the internet.”

When reached for comment, a Google representative pointed to a recent blog post from legal chief Kent Walker who wrote that Microsoft was “reverting to their familiar playbook of attacking rivals and lobbying for regulations that benefit their own interests.”

The debate began over Microsoft’s backing of a law in Australia to force Alphabet Inc.’s Google and Facebook Inc. to pay publishers for the value their stories generate on the internet giants’ digital platforms. But Microsoft has also lobbied governments in the U.S. and European Union on this issue, with Smith appearing before Congress last month to support legislation that would give news publishers more power to negotiate with technology platforms for payment for content. Google responded by accusing Microsoft of engaging in “naked corporate opportunism.” The spat ended a years long detente between the two companies, in which they avoided competing, via lobbying regulators and lawmakers, against each other.

Smith doesn’t appear inclined to back down. He noted that in 2005, U.S. news organizations garnered almost $50 billion in ad sales, a figure that he said has plummeted to $14 billion.

“Where has all the money gone? Well, it’s very clear where it has gone -- in Alphabet’s earnings yesterday they showed that in a single quarter, they had almost $45 billion in digital advertising,” he said, citing the company’s quarterly financial results. “What Google has fundamentally done is redesigned and re-engineered the web so that if you want to make money from content based on advertising, you have to do it through their exchange, by using their tools and paying money to, and through Google.”

Google has argued that its advertising machinery is beneficial for news publishers. On its earnings call Tuesday, Google shared that it has provided more than $1 billion to the news industry in grants. And Google’s video arm YouTube has been sharing funds with media creators since 2007.