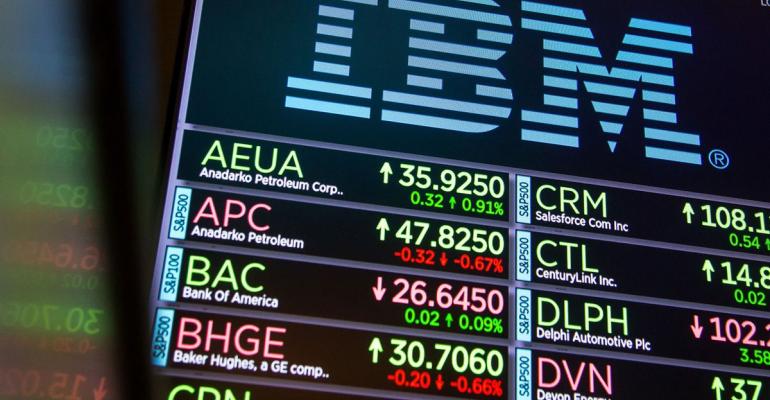 IBM has been asking investors to focus on what it calls strategic imperatives -- a collection of newer businesses like cloud computing, AI and security software. The cloud business grew 18 percent, adjusting for currency changes, to $4.7 billion in the quarter.

(Bloomberg) -- IBM may have won back some investors’ trust after posting renewed sales growth and saying its cloud business is performing well.

Revenue gained 2 percent, adjusted for currency fluctuations, to $20 billion in the second quarter, International Business Machines Corp. said Wednesday in a statement. Analysts estimated $19.9 billion. Profit, excluding some items, was $3.08 a share, compared with analysts’ projections of $3.04 a share.

Still, profit margins are stagnating and the Armonk, New York-based company saw a slight sales decline in the unit that includes its Watson artificial intelligence business. Shares gained about 1 percent in extended trading after closing at $144.52 in New York.

While revenue has declined for most of the past five years, IBM has been asking investors to focus on what it calls strategic imperatives -- a collection of newer businesses like cloud computing, AI and security software. The cloud business grew 18 percent, adjusting for currency changes, to $4.7 billion in the quarter. That’s an improvement from the disappointing 14 percent IBM posted earlier this year. Strategic imperatives, as a whole, generated $10.1 billion in the period, bringing the company closer to its goal of $40 billion in revenue from the category by year-end.

“It’s probably the best quarter that we’ve delivered in quite some time,” Chief Financial Officer Jim Kavanaugh said in a phone interview.

In April, investors sent the stock tumbling the most in two years after first-quarter growth in the cloud business slowed and margins across the company narrowed.

Cognitive solutions, which includes the much-advertised Watson AI line of businesses, generated revenue of $4.6 billion in the period. Adjusting for currency changes, that means it declined 1 percent year over year. Adjusted profit margins, another key measure for investors, narrowed to 46.5 percent.

Revenue from cognitive solutions fell because much of the unit is related to transaction software, which is a declining business, Kavanaugh said. Watson is actually growing, he said, though the company doesn’t break out its revenue.