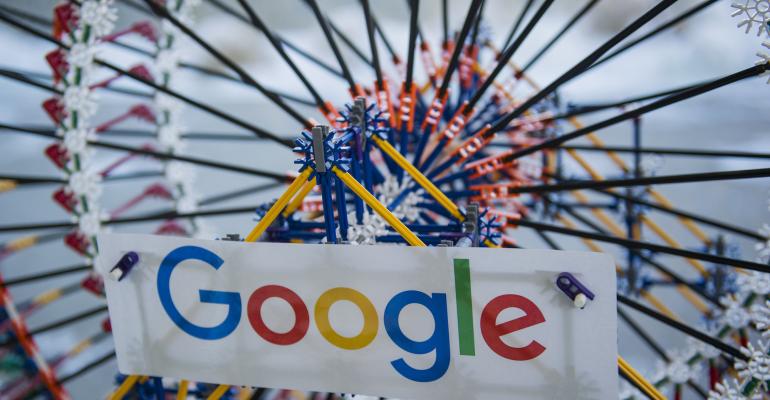 Alphabet Inc.’s first-quarter results came with a clear message to Wall Street: The company is embarking on a new spending binge to chase its biggest rivals. Almost all of that spending went to buttress newer cloud and consumer-device businesses that lag behind leaders Amazon.com Inc. and Apple Inc.

(Bloomberg) -- Alphabet Inc.’s first-quarter results came with a clear message to Wall Street: The company is embarking on a new spending binge to chase its biggest rivals.

Google’s parent posted the strongest sales growth in almost four years on Monday, indicating marketers kept flocking to its services amid rising scrutiny of digital ads. But the company also spent at historic levels, nearly tripling capital expenditure for the quarter to $7.7 billion.

Almost all of that spending went to buttress newer cloud and consumer-device businesses that lag behind leaders Amazon.com Inc. and Apple Inc. After neglecting these markets for years in favor of its main ad businesses and riskier moonshot bets, Alphabet is now splurging to catch up.

"The big story from the results was the significant rise in expenses," Brian Wieser, an analyst at Pivotal Research Group, wrote in a note to investors. He cut his price target on Alphabet shares to $970 from $1,040, citing worse-than-expected margin compression and capex levels. The stock fell as much as 5.2 percent on Tuesday, leaving it down for the year so far.

Other tech giants are spending prodigiously, too, as they hunt for new markets. In the fourth quarter, Amazon’s capex rose 50 percent and Facebook Inc.’s spending nearly doubled.

Alphabet’s rising first-quarter investments partly reflected a $2.4 billion real-estate deal. But even without that, capex more than doubled from a year earlier. Chief Financial Officer Ruth Porat cautioned investors to expect more of the same. "I wouldn’t suggest a one-off in terms of the investment we’re making," she said. "We’re really building out to support the growth that we’re seeing."

Chief Executive Officer Sundar Pichai told investors that Google’s nascent hardware unit, which builds smartphones and speakers rivaling Amazon and Apple, is two to three years from "the scale that we want to see." The investment required for this includes custom chips designed in-house, an expensive skill that Apple has been developing for years.

Previous heavy investment periods mostly supported Google businesses like Search and YouTube that had leading market positions. This time, it’s unclear if the company can close the gap with Amazon and Apple. Google’s cloud-computing service will likely generate as much as $2.5 billion in sales this year, according to Forrester Research estimates. That’s a fraction of the revenue Amazon Web Services pulls in each quarter. Google sold about 2 million Pixel phones in the fourth quarter, UBS estimated. Apple sold 77 million iPhones in that period.

Google’s higher spending in the first quarter shaved operating profit margins to 22 percent from 27 percent a year earlier. UBS analyst Eric Sheridan said that this volatility is the "new normal" for the company as it expands its cloud business, spends more on marketing consumer devices and YouTube invests in more original content.

After shunning its own marketing for years, Google is now embracing it. The company plastered ads for its digital assistant all over the CES conference in January and its cloud unit sponsored the NCAA college basketball tournament. Sales and marketing spending shot up 36 percent to $3.6 billion in the first quarter.

Despite the massive investment, growth still comes from Google’s legacy business. Demand for mobile search ads and a strong performance by the YouTube video service drove sales in the recent period, Porat said. Google’s business of selling targeted ads on other sites across the web also contributed, she said.

First-quarter sales came in at $24.9 billion, excluding payments to partners that distribute Google services and ads. That was up 24 percent from a year earlier and ahead of analysts’ forecasts, according to data compiled by Bloomberg.

So far, Google has shrugged off a privacy backlash set off by disclosures about lapses in Facebook’s data-collection practices. Google is the world’s largest digital-ad provider, a business that relies on targeted messages based on users’ online information and behavior. While increased concern about privacy and new regulation may crimp Google’s ad business at some point, the company’s broad reach, vast resources and dominant market share mean smaller rivals may have more to lose.

Europe’s General Data Protection Regulation kicks in next month and changes how internet companies collect user data and targets ads. Google has been adjusting to the new law for about 18 months already.

"We feel well prepared to meet the requirements," Porat said. "We’ve changed our policy as needed. We are also providing users with strong user controls and privacy settings and privacy check-ups. This has been a very strong area, and we will continue to do a lot of work in this area."

Even here, costs are rising. Google payouts to distribution partners, known as Traffic Acquisition Costs, or TAC, jumped 36 percent to $6.3 billion. Alphabet executives said TAC for Google sites as a percentage of revenue will continue to climb, but at a slower pace.