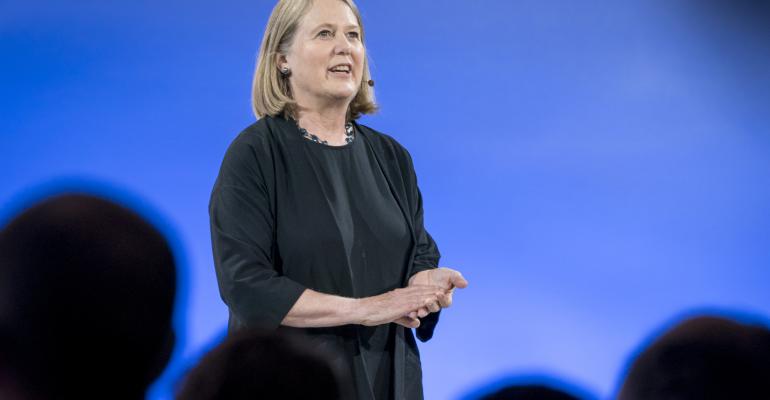 Google Cloud Chief Executive Officer Diane Greene, who has pushed for three years to catch up with market leaders Amazon.com Inc. and Microsoft Corp., will step down from her post and be succeeded by former Oracle Corp. executive Thomas Kurian.

(Bloomberg) -- Google Cloud Chief Executive Officer Diane Greene, who has pushed for three years to catch up with market leaders Amazon.com Inc. and Microsoft Corp., will step down from her post and be succeeded by former Oracle Corp. executive Thomas Kurian.

Greene, 63, will remain CEO through January, working with Kurian, who will join the Alphabet Inc. unit Nov. 26. Greene said in a blog post that she will stay as an Alphabet board member.

During her tenure in charge of one of the internet giant’s central units, Greene rapidly expanded the business, hiring a major new salesforce and investing hundreds of millions of dollars in data centers and undersea cables. Still, Google cloud is seen by analysts as a distant third in the U.S. to Amazon and Microsoft in the market for running apps and storing data in the cloud, despite having a head-start on Microsoft that predated Greene’s time at the company.

Her management also spurred questions from some employees about Google’s work for the U.S. government. The company retracted its bid for a multibillion cloud-computing contract with the Pentagon amid worker protests over Google’s support for the U.S. military.

Greene is one of Google’s most prominent female executives. Her departure highlights the gender imbalance in the management ranks of a company that is grappling with criticism over how it has treated its female employees, especially in regards to sexual harassment.

Greene said she plans to turn her attention to mentoring and education. Before joining Google, she was a founding member and eventual CEO of software company VMware, which EMC Corp. bought in 2004 and is now part of Dell Technologies Inc.

In her blog post, Greene praised her staff for boosting Google’s business. “The cloud space is early and there is an enormous opportunity ahead,” she said.

Still, Greene’s time at Google didn’t include the kind of major acquisition that some analysts said would have narrowed the competitive gap with Microsoft and Amazon. Greene said in a March interview that she was prepared to make a big purchase to catch up to the industry leaders. Since then, two notable transactions were made and neither of them by Google Cloud -- to the surprise of some in the industry.

In June, Microsoft agreed to buy GitHub Inc., whose tools are used by developers to collaborate on and store computer code, for $7.5 billion. Google Cloud executives had indicated that they would’ve liked to own GitHub, but they didn’t have signoff from Alphabet’s board to write the check, people familiar with the matter said.

In October, IBM bought open-source software company Red Hat for $33 billion -- the world’s second-largest technology deal ever -- and another purchase that analysts said could have seen interest from Google. The company had early-stage talks with Red Hat in 2017, but didn’t proceed further, said people familiar with the matter who asked not to be named discussing private deliberations.

With Kurian, Google will be getting an executive who used to supervise cloud development at Oracle, the world’s second-largest software maker. Kurian had a difficult time transitioning the company to cloud computing. After years of effort, Oracle struggled to gain much traction against Amazon Web Services and Microsoft’s Azure. He’ll now have a chance to try it again.

Kurian spent 22 years at Oracle, where he grew into a powerful acolyte of Executive Chairman Larry Ellison. People familiar with Kurian’s time at Oracle said he adheres to a top-down model of management, which may be at odds with Google’s more collaborative work environment. He was also known to clash with some of his subordinates and have teams jostle for resources at Oracle, said the people, who asked not to be named discussing internal issues. Kurian didn’t immediately respond to a request for comment.

Kurian climbed through the ranks of the software maker by spearheading products that accelerated sales growth, such as middleware, but got his start as a consultant at McKinsey & Co. He was said to have disagreed with Ellison on the direction of Oracle’s cloud business, Bloomberg reported in September, leading to Kurian’s leave of absence and eventual resignation from the company’s fourth-highest role in September.