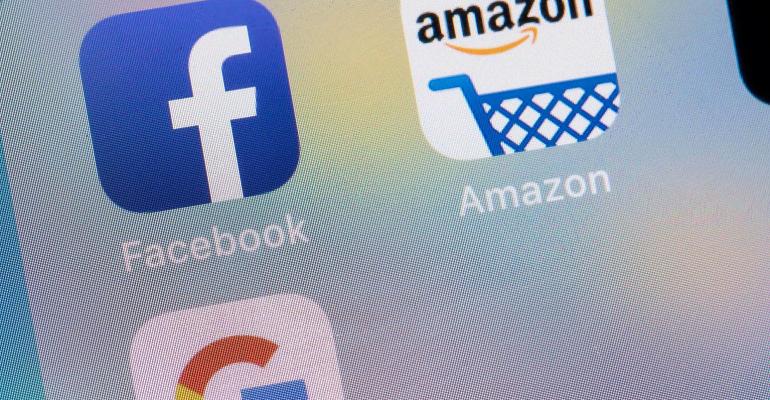 The lawmakers are asking the transparency register to revoke the companies' access to lobbying EU institutions if they're found to violate the rules.

(Bloomberg) -- Meta Platforms Inc., Amazon.com Inc. and Alphabet Inc.’s Google funded an outside lobbying group to sway lawmakers on a major European tech law, but failed to disclose the connections, according to complaints filed by members of the European Parliament.

In the complaints, three members of parliament said the big tech companies broke transparency rules for lobbyists and failed to list their members correctly, according to documents seen by Bloomberg and filed to the EU’s Transparency Register on Thursday.

The lawmakers are asking the transparency register to revoke the companies’ access to lobbying EU institutions if they’re found to violate the rules.

The tech companies are accused of lobbying under the guise of a group that said it represents small and medium-sized businesses to try to influence the Digital Markets Act and Digital Services Act. The acts take aim at so-called gatekeepers, preventing them from giving preference to their own services and requiring the largest platforms to make messaging services interoperable.

Lawmakers wrote they were unaware that messages from a group called the Connected Commerce Council during the run up to the DMA and DSA votes came from the likes of Google, Amazon and Meta.

“After the votes on both laws we learned the funding and source of these messages comes from a different angle,” they wrote.

Google, meanwhile, said its work with the council “is clearly and transparently listed on our declaration.”

“We are committed to transparent engagement and declare our sponsorship and partnerships with various organizations in a comprehensive list on the register’s website,” Google said.

Meta and the Connected Commerce Council didn’t immediately respond to requests for comment on the news, which was first reported by Politico.