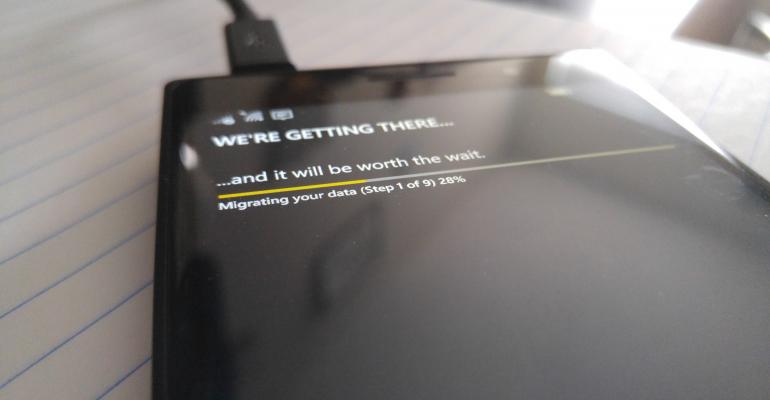 This week Microsoft will officially launch the General Availability of the Windows 10 Creators Update for PCs.

The official availability follows its early access window that opened last week and allowed users to upgrade their Windows 10 systems starting on the 5th of April using either the Media Creation Tool (MCT) or the Windows 10 Update Assistant.

Microsoft has already notified users that this will be a slow and steady roll-out via Windows Update and that it could take several months to offer the Creators Update to all eligible systems. The Redmond company has also confirmed the Windows 10 Mobile version of the Creators Update will become available on 25 April 2017.

Of course, that availability will be very dependent on multiple factors:

It also appears a decision to limit which handsets will get the Creators Update will kick in even before carriers have anything to say about its availability. Last week, as the PC version of the Creators Update became available early, ZD Net's Mary Jo Foley had a story about this update only being available for a limited list of Windows 10 Mobile/Phone handsets.

According to Foley's sources these are the mobile handsets that will be eligible for the Windows 10 Creators Update:

Now for comparison, when the initial release of Windows 10 Mobile came out in March of 2016, there were just 18 phones eligible for the upgrade from Windows Phone 8.1:

In addition, the following six phones were eligible for that initial update to Windows 10 because they were released into the consumer market running Windows 10 Mobile:

By comparing the list of phones from last March that were eligible for the initial Windows 10 Mobile release and the list compiled by Foley, there are only seven phones that make the cross-over and continue to be supported with the Creators Update upgrade for Windows 10 Mobile:

This means that no Windows Phones, with the exception of the 640 and 640 XL, that were originally released with Windows Phone 8/8.1 as their operating system are eligible for official support with the Creators Update release later this month. In the case of the Lumia 640 and 640 XL they were advertised as ready for Windows 10.

So with the release of the Creators Update this Spring, it appears that attrition is the key issue here with support for older Windows Phone/Mobile handsets. Even some of the devices on the supported list for this upgrade such as the last two Lumia's released by Microsoft, the 950 and 950 XL, hit the consumer market in the fall of 2015 and are quite long in the tooth.

This type of attrition is par for the course when there has been no new hardware released to replace those early Windows Phone 8/8.1 handsets beyond a couple of flagship devices like the aforementioned 950 and 950 XL. With the platform already well under 1% of the overall mobile handset market, Microsoft certainly needs to put mobile and its status on the table and have a discussion about it next month at their annual Build developers conference. As I have mentioned before, Redstone 3, the next major feature update for Windows 10 which is expected this fall, could be a vehicle for Microsoft to give its mobile fans some clear information about the platform by focusing on mobility across the ecosystem. While we do not yet know if the future holds the ever elusive unicorn called a Surface Phone, Microsoft still needs to address where they are on the mobile side of the Windows 10 platform and ecosystem.

Microsoft's Terry Myerson said at Build 2016 that mobile was not the companies focus that year. Well it is now the next year and time to be straight up with customers, read fan base, about the future of the platform.