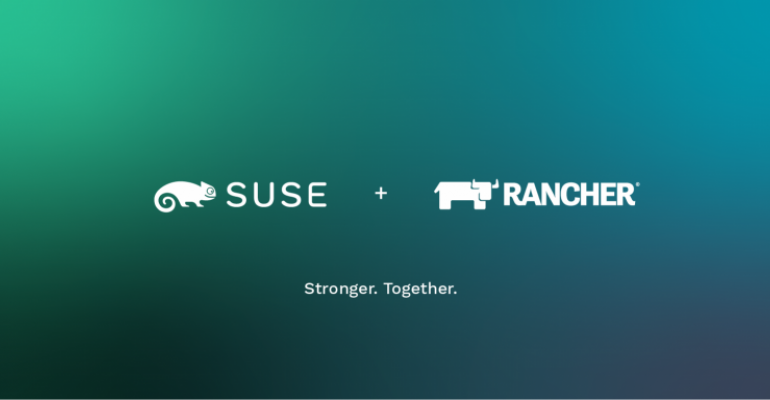 SUSE Buys Rancher Labs to Up Its Kubernetes Game

With the marriage of SUSE and Kubernetes management platform Rancher Labs, the venerable commercial Linux company hopes to better compete against Red Hat, Ubuntu and other Kubernetes vendors.

Linux company SUSE announced that it had agreed to purchase Rancher Labs, a six-year-old Cupertino-based startup that specializes in Kubernetes-based products. Terms of the sale, which is expected to close in October, were not disclosed, but CNBC reported that SUSE is spending at least $600 million, according to two people familiar with the deal.

This looks to be a very good buy. Rancher Labs brings to the table its self-named Kubernetes platform, which supports all Cloud Native Computing Foundation-certified Kubernetes distributions and brings ease-of-use to securely managing Kubernetes clusters across hybrid infrastructures from a centralized location. K3s, Rancher Lab's edge-focused, minimized version of Kubernetes, which is designed for use in resource constrained edge servers and in remote devices, is also a differentiator. The two new products will put parent company SUSE in a better position to compete with the two other major enterprise Linux vendors – Red Hat and Ubuntu – as well as with VMware and the public clouds, which all have ready-to-run Kubernetes options.

The deal also helps keep Rancher Lab's reputation as a company with a strong dedication to open source intact, since SUSE is the world’s largest independent pure-play open source company now that Red Hat is tied to IBM.

"This deal, upon closing, will combine SUSE’s strengths in enterprise Linux, edge computing and AI, and Rancher Labs’ strength in Kubernetes, making the combined company the open source innovator of choice," SUSE's CEO Melissa Di Donato told ITPro Today. "Only the combination of SUSE and Rancher Labs will have the depth of a globally supported and 100% true open source portfolio, including cloud native technologies, to help our customers seamlessly innovate across their business from the edge to the core to the cloud."

Rancher Labs will retain its separate identity, although details of what that will look like aren't yet being disclosed for regulatory reasons.

"I will say that it is key for both SUSE and Rancher Labs to preserve the brand equity of both companies," said Di Donato.

"It's not like we're going to go forward as two distinct companies, but I think the brand will exist, I think our product will exist, and the community will exist," Liang said. "I don't think you're going to see a lot of changes. The whole point of SUSE buying us is they want us to continue our innovative journey."

If this sounds a bit like last year's acquisition of Red Hat by IBM (minus thirty-some billion dollars) that's because it is.

Big companies buying the open-source expertise they need is nothing new: IBM bought Red Hat because it needed Red Hat's expertise in hybrid cloud, and now SUSE is acquiring Rancher Labs because it needs Rancher’s expertise in Kubernetes – an all-important component of the hybrid cloud. And just as IBM found a place for Red Hat's CEO, Jim Whitehurst, at the president’s table, SUSE is making a place for Liang post-acquisition.

"I will be running all of SUSE's engineering," said Liang. "I'm very product-focused. I really haven't been doing sales and marketing at Rancher, even though I'm the CEO. So pretty much, I get to continue to do what I want to do, except now I've got ten times more resources."

Although Rancher Labs developers will continue to work out of its offices in Cupertino and Phoenix, Liang expects that sales will be handled solely by SUSE's marketing people.

"The nice thing is the alignment is very good, so we don't really need to keep a separate sales team for Rancher," he said, adding that the current Rancher sales department will be rolled into SUSE. "Basically, SUSE will be selling Rancher and Linux. Linux and Kubernetes are very well aligned, you know. It's very much adjacent. So, it's not like we're going to go forward as two distinct companies."

"In a world where everyone wants to be everything, SUSE and Rancher share the same goal – happy and satisfied customers," Di Donato said. "This acquisition enhances our ability to offer a more comprehensive and broader best-in-class portfolio, and greater customer choice with no vendor lock-in. Additionally, customers will also benefit from our vastly increased global presence and innovation power."

SUSE predates Red Hat, having released its first Linux operating system (SUSE Linux) in 1994, making it one of the oldest commercial Linux distributions. After being under the thumb of owners Novell and then Micro Focus since 2004, SUSE regained its independence in March of last year, after being acquired for $2.5 billion by Sweden-based growth investor EQT Partners.

Although the company does not issue a public earnings report, in April 2019, it said it had recorded annual revenue of a little more than $400 million.

"I am excited," said Liang. "I want to really help build SUSE into a big success. I think SUSE historically has always been probably less known inside the U.S. and more known in Europe, but their business is actually entirely global. There's a lot we can do to build up the business, but also increase the profile of the company. I'm really excited about it."