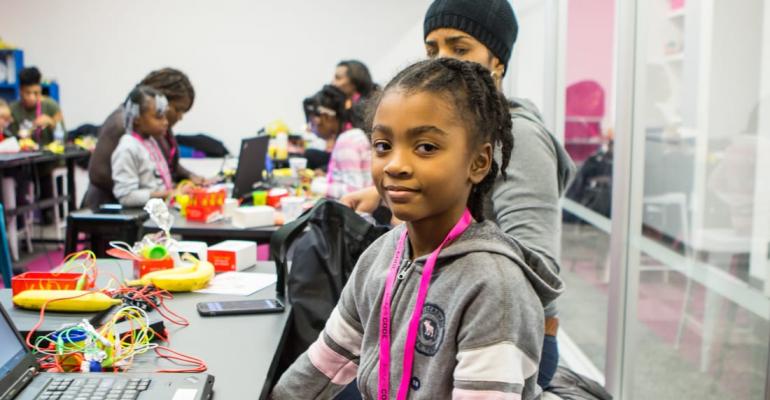 Source: Black Girls Code
Black Girls Code is one of the organization's that will benefit from Docker's diversity in tech initiative.
Compute Engines>Containers

Diversity in tech was front and center at DockerCon's second day, as CEO Steve Singh announced the Docker Foundation to promote workplace diversity.

While the first day's keynotes at DockerCon opened with announcements about new products for managing containers, on Wednesday Docker CEO Steve Singh started the conference's second day by taking a more philanthropic tone by announcing the creation of Docker Foundation, which the company is calling a "corporate social responsibility initiative."

According to a press release issued to coincide with Singh's announcement, the purpose of the foundation is "aimed at transforming the world through inclusive access to technology and education." Translated into everyday language, that means the foundation wants to help address the lack of diversity in tech workplaces.

Docker said the new nonprofit foundation will support organizations that have mandates to enable a more diverse generation of developers, with a focus on educational organizations. For starters, this will include organizations such as Black Girls Code, which seeks to provide African-American youth with marketable computing skills; CodePath.org, which supplies educational support for computer science students; and Holberton School, which offers an alternative to college for would be software engineers.

"It's a commitment of Docker's technology, its people and its resources to enable individuals to pursue a career in technology and to make a meaningful impact on their lives and in their communities," Singh said in his keynote address. "Everyone in the Docker community ... is welcome to join us to lower the barriers of education and to create opportunity for other people."

Singh said that Docker Foundation will be funded by individuals, and that he and former Docker CEO, Ben Golub, are giving $1 million to the foundation.

For many years, diversity in tech workplaces has been a central issue in software developer communities, which tend to view themselves as forward-looking even though statistics indicate that developer workplaces remain disproportionately dominated by white males. Oddly, this is even more true in open source companies, which some studies indicate have even less diversity than proprietary companies.

Docker Foundation starts life as a member of Pledge 1%, an organization that was founded in 2014 by Salesforce; the Australian-based software developer, Atlassian; and Rally, which is now a part of CA Technologies. The organization advocates a 1-1-1 model of corporate philanthropy created by Salesforce CEO Marc Benioff, in which companies contribute 1% of profits, 1% of employee hours and 1% of product to the community. More than 700 member companies have adopted the 1-1-1 model.

In a statement, Docker said that the foundation provides financial support to organizations working to build a more diverse community of developers and technologists, that Docker employees will be able to support foundation supported organizations "through education, volunteerism and enablement of communities," and that Docker will help educational institutions use Docker technology "to serve a more inclusive population."

"It’ll take path-breaking companies like Docker, which are willing to step up and invest in overlooked talent, to change the status quo for minority engineers and close the tech skills gap," Michael Ellison, CodePath's CEO and founder, said in a statement. "We look forward to working with Docker as we redesign computer science education to cultivate a new generation of innovative, creative, inclusive programmers."

Expect Rancher and Kubernetes to Be the Stars at Digital SUSECON
May 15, 2021