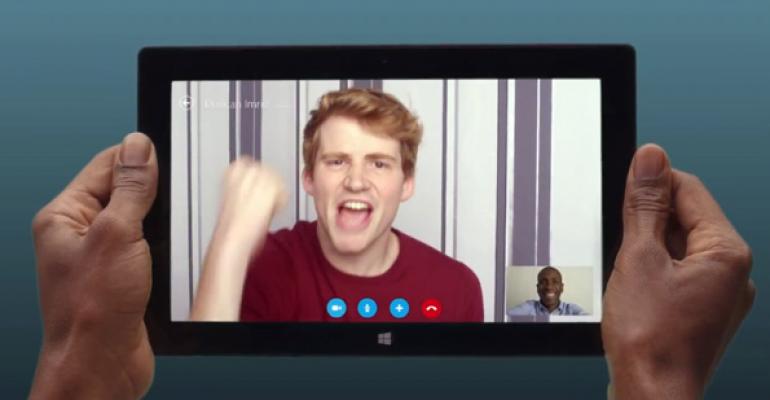 To say that I’ve had a love-hate relationship with Skype is putting it mildly: I use Skype to record two podcasts each week, and with Microsoft forcing this client on Messenger users such as myself, I’m struggling with using it even more frequently for instant messaging. Of course, I’ve been using the abysmal Skype desktop client for these purposes. The Metro-style mobile app for Windows 8 and RT is another thing entirely.

As the user of a desktop PC with a large display, I don’t spend a lot of time in full-screen Metro apps. But thanks to a combination of spending the past month with Surface Pro and the simple passage of time, during which more and better Metro apps have appeared, I can see that things are improving. And with the Skype app in particular, Skype/Microsoft has a chance to set things right.

Here’s the thing: While the Skype desktop application is sagging under the weight several years of feature creep and services integration, the Skype (Metro) app is a fresh start, a chance to not just start over but start over with a codebase that is cleaner, simpler, safer and more easily maintained going forward. Feature creep? Non-existent. In fact, one of the most obvious issues with the Skype app—aside from the standard Metro complaints—is that it’s a bit light, functionally, since it’s so new.

I wasn’t super-impressed with the initial release of the Skype app, which had a pretty spare user interface, and supported core Skype features such as audio and video calling and IM-style chat. But with this week’s release of Skype 1.5, things are looking up. Skype 1.5 adds file sharing capabilities—the ability to send and receive photos, documents, and other files—plus a bunch of performance and stability fixes.

One oddity: It appears that the Skype app will only work when signed in with a Microsoft account, and it’s tied to the account you use to sign into Windows. (If you use a local account, you’ll be asked to add your Microsoft account the first time you use Skype.) This means you can’t just sign in with your Skype ID, though those of you making the transition from Windows Live Messenger will find that this does of course let you continue communicating with your Messenger-based contacts.

I’ll be using Skype for Windows 8 going forward, including with this week’s podcasts, to make sure it works as advertised. But it seems that the biggest issues I have with the desktop version of Skype for Windows can be avoided simply by using the Metro client. (This assumes I can live with full-screen and/or snapped usage, of course.) In this case at least, less is more.