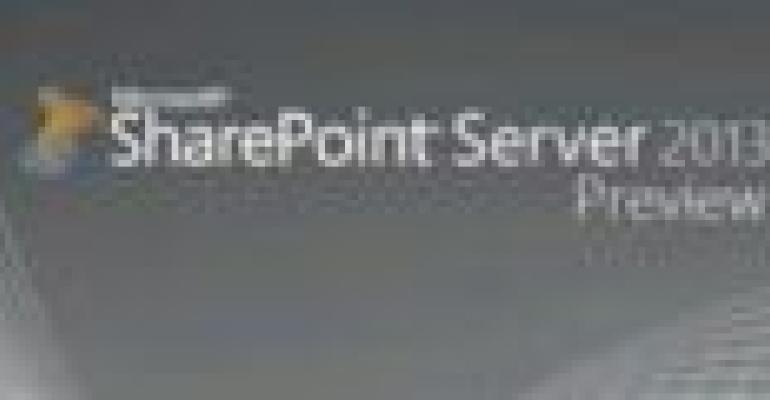 Marc Anderson started a thread recently on a Microsoft forum: "SharePoint Designer 2013's Missing Design View." If you're in the trenches of SharePoint, you might not have noticed the lack, but it's made a stir among SharePoint MVPs and other community leaders. (More on SharePoint 2013).

Marc wrote: "In SharePoint Designer 2013, the Design View is no longer available. Some of us MVPs have been talking about this since the beta release, most recently at SPTechCon for me. The general response from the real people we talk to about this – after a stunned silence – is “You’ve got to be kidding me!” I’m of the belief that this is going to cut a lot of people off at the knees."

His post generated a long and mostly supportive thread from well-known names in the SharePoint community who value Design View in SharePoint Designer. It also generated opposing views from people who believe SharePoint Designer is part of what's wrong with SharePoint. Some conjectured possible reasons for Microsoft's actions. Some expressed hope that Microsoft would bring it back. Others said it was too late.

Ironically, one of the most realistic responses came from a SharePoint MVP who has built his recent professional life around SharePoint Designer. Asif Rehmani wrote, "Design View is not coming back and that's a fact. Now the question becomes: What do we do with all of the solutions that we have made using the Design View? How do you support it going forward? That's the Million dollar question on everyone's mind who is close to this functionality change."

The why, the how, the implications—all have been turned over and thoroughly examined. It remains for Microsoft to decide whether to answer the questions. (Microsoft's SharePoint Designer (SPD) team said, in response to Marc Anderson's question in the comments on a post at that site, "We hear you all. We'll release a blog posting on the design view story shortly." )

It's rather surreal after a while to read the team's chirpy blog posts about new features and abilities while knowing that a chunk of the SharePoint community is upset about one not-so-new feature they wish were still in it—like watching kitchen knife sellers trying to pitch their 1,600 piece set of chef's knives to an audience of people who don't have hands.

I lean toward those who want Design View back, not because I used it, but because I sympathize with anyone who has had to deal with the loss of the tools they count on.