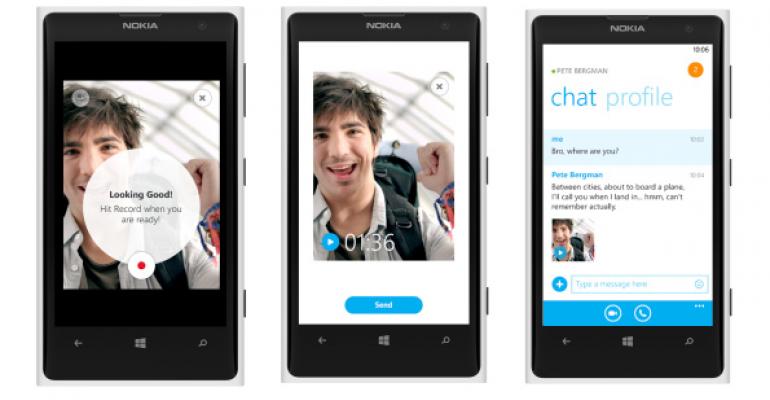 I'm sure we'll get the next feature first

Microsoft today released an update to Skype for Windows Phone 8 that adds the video messaging feature that first appeared on other platforms back in May. With video messaging, Skype users can now record and share a personal video message, even when your friends and loved ones are not available.

Now the Windows Phone version is available too.

"We're excited to announce Video Messaging is now available to Windows Phone 8 users in the Skype for Windows Phone 8 update released today," Skype's Lara Kingwell writes in the Garage & Updates blog. "The launch of Video Messaging on Windows Phone 8 marks another step forward in Skype's Mobile Future journey to bring great Skype experiences across devices. In this update, we've also addressed several bug fixes, and made it easier to access your settings from the home screen."

Here's the official description of this feature.

"Skype Video Messaging is easy and convenient.  Windows Phone 8 users can record and share a personal video message, which the chosen recipient can play as soon as they sign into Skype.  This allows users to capture and share a fleeting memory, create a heartfelt reminder or simply tell a friend or family member 'wish you were here' – even when their friends and loved ones are not available.  Once your contact has received a video message from you, they can reply back with a video right away."

To record a video message in Skype for Windows Phone, simply start a conversation normally. If your friend isn't available, you'll be given the option to leave a video message.