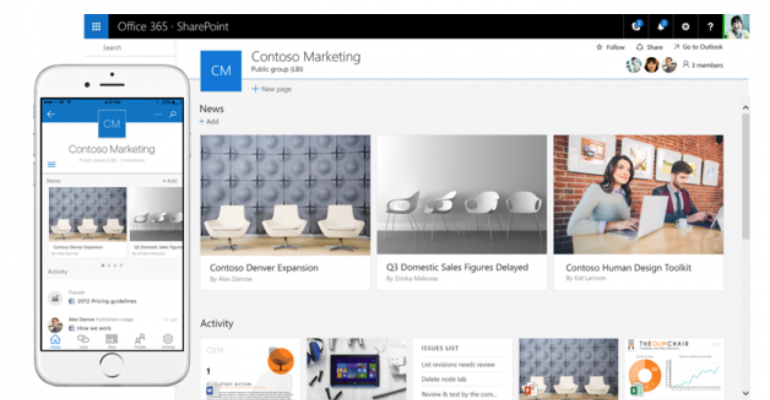 Today I attended the Microsoft event in San Francisco called “The Future of SharePoint.”  With a title like that, it leaves you thinking and wondering. The good news is, SharePoint has a great future ahead, and to prove this Microsoft made some extraordinary announcements.

Microsoft’s core message contained a new cloud-first, mobile-first vision and roadmap for SharePoint, and how that is impacting SharePoint Server 2016.

For On-Premises and Hybrid customers, SharePoint Server 2016, Project Server 2016 and Office Online Server reached general availability today and can be deployed within your organization.

Microsoft CEO Satya Nadella had a message for us on “the Future of SharePoint”.  Listen to it here.

The goal is to empower people, teams and organizations to intelligently discover, share and collaborate on content from anywhere and on any device. Hear more on the vision too.

File and Collaboration on ANY Device

This I am really excited about, as there are some great things coming soon.

More details can be got by watching Adam Harmetz’s video.

Microsoft also outlined their roadmap for SharePoint and Office 365 feature that we can expect to see soon. We should expect to see the following items by the end of the quarter:

For me having a Development background I was really excited to see the announcement of the “SharePoint Framework”. With lots of organizations now using SharePoint both On-Premises and in the Cloud it makes sense that the ability to unify the development approaches and services that are available. This will allow for better creation of that follow the patterns and practices that Microsoft themselves used to create these new experiences that were announced today. In the future we will see the Microsoft Graph updates to work with files, as well as Web hooks and Client Site Web Parts being added. By the end of this year a Site API will be added to the Microsoft Graph as well as the new Framework being extended for custom sites. This is really exciting enhancements being made that will allow easier, faster and better delivered SharePoint Solutions. To learn more about the SharePoint Framework, read “The SharePoint Framework—an open and connected platform.”

As I speak about Security and SharePoint, quite a bit, I was excited to see that dynamic conditional access policies have been added to SharePoint. These policies will intelligently define access based on who you are, the app or device you are using, and your network location.

Finally, we will have the ability to truly control access to our data, not just basic administrative controls, policies and reporting. Later this year, we will also be able to bring our own keys to Office 365 for SharePoint allowing us to encrypt data stored in SharePoint. Data Loss Protection components will also be expanded allowing for us to apply policies down at the site level.

If you want to see what is currently supported within Office 365 then head over to this great video.

Check out Bill Baer’s video and Michael Connolly’s video for more details on the significance of SharePoint 2016.

Microsoft will be updating SharePoint Online regularly, and SharePoint Server 2016 Software Assurance customers will have the opportunity to enable many of the cloud features within the On-Premises SharePoint farms with new Feature Packs that will be released in 2017.

So to wrap up, some great announcements were made today, some great demos were given and the promise of SharePoint is as strong as the first time I ever started working with. I am looking forward to the next year as Microsoft delivers on what they announced today.

Thinking like a Hacker to help Secure SharePoint
Apr 18, 2016

Check Out These 6 SharePoint Fest DC Sessions for Deep Insight into SharePoint 2016
Apr 27, 2016