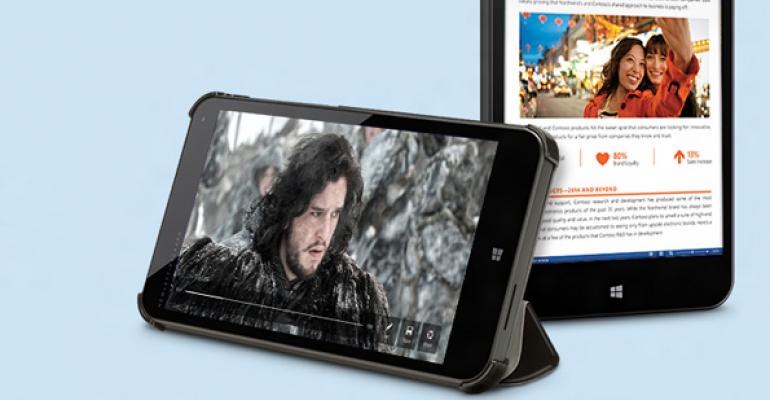 I review hardware devices regularly, so I'm often asked which I'd choose between two similar choices. For example, which is the best 7-inch Windows tablet, or the best no-contract Windows Phone handset? Here's a quick rundown of some device comparisons I'm asked to make regularly.

Note: Because I live in the United States, the prices/availability of the products mentioned here is of course US-focused.

This one is pretty easy, but it's a good example of what I'm talking about. Here, we have two seemingly comparable mini-tablets, both with 7 inch screens: The HP Stream 7 (Signature Edition) and the Toshiba Encore Mini. Both cost about $99.99, both come with one year of Office 365 Personal, and both have most-comparable specs. But the HP comes with 32 GB of internal storage (vs. 16 on the Toshiba). And the HP has a 1280 x 800 display whereas the Toshiba has a terrible 1024 x 600 screen that is upsized to 1280 x 768, making it look even worse.

So let's try a trickier one.

The no-contract Nokia Lumia 530 and BLU Win JR are basically identical on paper: Illegible, low-resolution 4-inch screens, a paltry 4 GB of internal storage, sad rear-facing cameras, and (in the case of the 530) no front-facing camera. They're so close it's hard to tell them apart, and both cost $69.99. The Lumia benefits from the availability of the admittedly excellent Lumia apps collection. But the BLU has that front-facing camera, a few additional sensors, and can be purchased in different colors; with the Lumia, you would have to find and buy different color shells. (And good luck with that.)

Winner: There is no winner, no one should under any circumstances purchase either of these devices.

So let's find the lowest-end Windows Phone you should buy.

I actually get this question a lot. So here's the deal: Both of the laptops are basically identical, with the biggest differences being the relative screen sizes and prices. (Beyond that, there are some minor port differences, and the HP Stream 13 has one more USB port.) So, which should you get? The HP Stream 11, which retails for $269, or the HP Stream 13, which costs $290?

Winner: They're both winners. My vote is for the HP Stream 13, because I think the extra screen size is meaningful, but the smaller HP Stream 11 is a great choice too, especially for kids. But check this out: For just $10 more than the HP Stream 13, you can get the HP Stream 13 (4G version) with 200MB of free data per month, for life. It's just $299.99 right now. That is a steal.

Here's another tough one. You might think that a nine-year-old Xbox 360 couldn't possibly hold a candle to the mighty processing might of the HD-class Xbox One, and from a technical perspective that is probably true. Certainly, games often look a lot better on the Xbox One. But the Xbox 360 has some advantages that are hard to overlook. It performs better than the Xbox One when you're navigating the Dashboard UI, it has a deep game library the Xbox One can't match, and it's super-inexpensive right now. You can get a 4 GB Xbox 360 right now for just $199.99 ($176 on sale) or an Xbox 360 250 GB Holiday Bundle (with two games, Tomb Raider and Halo 4) for only $270. The Xbox One, meanwhile starts at $349 for the Assassin's Creed Unity Bundle (with a 500 GB hard drive and two Assassin's Creed games), which is a tremendous deal. And of course there are more expensive/capable bundles, too.

Winner: Again, both are great deals right now. I'd have a hard time picking between the 4 GB Xbox 360 ($176) and the Xbox One Assassin's Creed Unity Bundle ($350). Depends on your needs and budget.

I'm leaving Chromecast (and various Miracast dongles) of this comparison because you either need that device or you don't, and it doesn't really compete directly with its more full-featured cousins, the Amazon Fire TV Stick ($39) and the Roku Streaming Stick ($39.99). They're very similar, with dedicated remotes, access to tons of great content choices, and hideaway designs. But each has some advantages. The Roku has more channel choices, including Google Play Video, and it's doesn't have an Amazon-centric UI. But the Fire TV Stick performs much better than the Roku.

Winner: It's a toss-up. I prefer the Roku user interface by a wide margin and would recommend stepping up to the Roku 3 ($85) if you can afford the ~$50 price jump. But the Amazon Fire TV Stick ($39) and Roku Streaming Stick ($39.99) are both excellent, especially at those prices.

Happy (and smart) shopping. And let me know if there are any other product categories that warrant this kind of comparison.