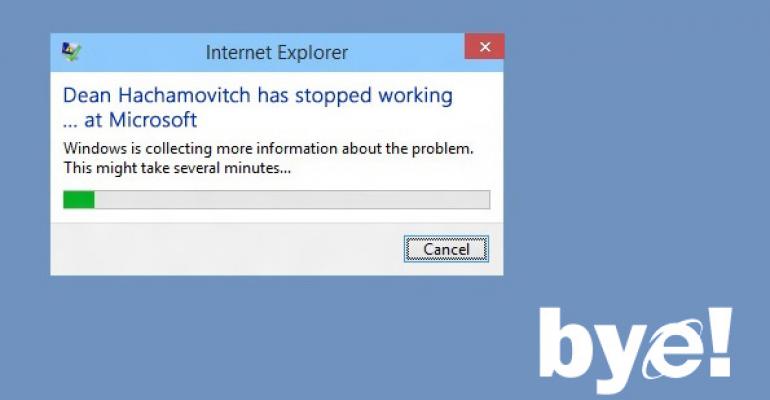 An often irreverent look at this week's other news, including Dean Hachamovitch's exit from Microsoft, a bizarre but temporary anti-Google post, Microsoft will take on tech support scammers, a long-awaited Xbox VR headset may appear next year, and the US is trying to figure out an appropriate response to the North Korea hack of Sony.

Dean Hachamovitch has left the building

Via a new blog post, former IE chief Dean Hachamovitch has revealed that he's leaving Microsoft. Dean was one of the good guys, and though he did survive the post-Windows 8 purges, he left the IE team over a year ago and it's not clear what he has been working on since. But now that he's leaving Microsoft, he tells Geekwire that he will advise LifeQ, a company that uses data to create digital simulations of human physiology. I miss Dean already and wish him the best of luck.

Office 365 senior product manager Tim Carroll posted a bizarre rant against Google on the firm's Office Blogs this week, but it was quickly pulled. (You can find it in Google's web cache. No, that's not ironic.) In it, he compares Google to his "Knucklehead Son" who "doesn't want to go to college," takes the "easy way and [not] the right way," and doesn't understand that "that nothing good ever comes for free." "I'm philosophically opposed to mediocrity," he writes of Google Apps. "Google Apps has file fidelity issues when you want to work on Office documents ... how're you going to build a house with a plastic hammer?" So here's the thing. Microsoft used to have a wonderful anti-Google white knight in the form of Tom Rizzo, a guy who was always read for a classic, quotable anti-Google jab. And it's pretty clear that the idea here was for Carroll to channel that Rizzo edgy humor. But there's no one like Tom Rizzo. And if you are a fan of irony, you'll enjoy this last bit: Tom Rizzo works on EC2 for Amazon now. At least it's not Google.

Microsoft revealed this week that it will file a civil lawsuit in federal court against Omnitech Support and other tech support scammers for unfair and deceptive business practices and trademark infringement. These are the companies that advertise that your PC is slow or infected and then sell you bogus fixes. Or, as we might call them, antivirus vendors. But I kid: These guys are even worse, and Microsoft says it has received over 65,000 customer complaints regarding fraudulent tech support scams this year alone. Apparently Omnitech Support pretends it is affiliated with Microsoft in some way, and in gaining customers' trust, then starts installing malware on their PCs so they can sell them unnecessary computer cleaning services. This kind of thing is just sad.

Right, because it's possible to "partially abandon" something.

Microsoft rumored to be finally announcing a VR headset

Way back in June 2012, I wrote about Microsoft's then-evolving plans for a next-generation Xbox console which was to have included a next generation Xbox with Kinect v2 (out now and called Xbox One), a set-top box version (canceled, though it could re-appears in the future), and a set of VR glasses codenamed Fortaleza. That last bit never appeared, but it may be coming soon: Rumors suggest that Microsoft is set to announce this VR headset at E3 2015, which is set for mid-year. Citing ever-reliable (cough) "upstream supply chain" sources, Digitimes says the gadget is being made by the team behind Surface and will go head-to-head (or at least eyes-to-eyes) with Facebook's Oculus Rift headset. Which is just fine with me: I look forward to jumping around the room playing Call of Duty 27: We're Running Out of Pretend Wars.

Two things. "Chrissie pressie" is not a thing. And there are no "Mac Office fanboies" anywhere.

I'd recommend bombing them back to the Stone Age, but if you've ever seen photos of this country at night from space, you know they're already in the Stone Age. Obviously, the only appropriate thing to do is to send James Franco and Seth Rogen over there so they can apologize to Kim Jong Un. In person.

Factor in those not testing Windows 10 and that figure is closer to 150 million.