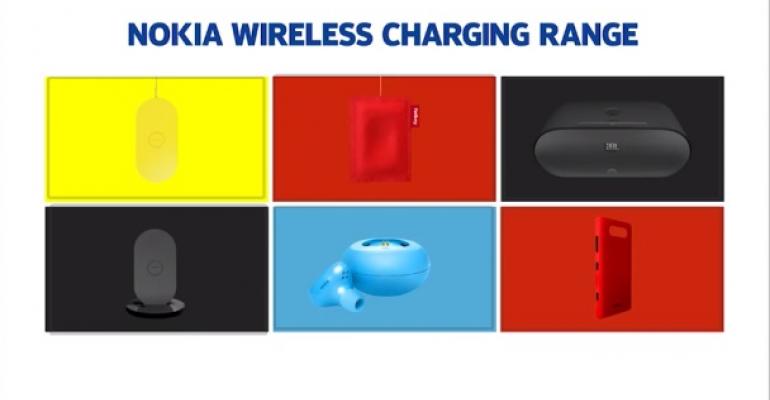 Nokia does wireless charging right, whatever your needs

Nokia has pushed to improve the Windows Phone ecosystem more than any other device maker and one of the key technologies it’s backed is Qi-based wireless charging. The firm now offers several ways to wirelessly charge its Lumia handsets, and this capability is a huge differentiator for the devices.

To be clear, not all Windows Phone 8-based Lumia handsets support wireless charging. The capability is built into the flagship Lumia 920, which I’m currently evaluating, and can be added to the Lumia 820, 810, 822, and 720 with optional wireless charging shells that also come in a variety of colors, for a customized look. (I discussed this aspect of Nokia’s strategy in The Nokia Advantage: Customizable Design. (The Lumia 620 and 520 do not support wireless charging.)

As I noted in Smart Phones and Wireless Charging, this capability is a game changer. And it makes the process of plugging in a device to charge it—especially most of today’s devices, which use a finicky one-sided micro-USB-based charging—seem positively antique by comparison, like having to go back to candles after experiencing electric light. Once you’ve gone wireless charging, you can’t go back.

To that end, Nokia supplies a number of wireless charging accessories for its Lumia handsets, and of course they’ll work just fine with other compatible devices, including the Verizon version of the HTC Windows Phone 8X, and the Android-based Google Nexus 4. And more are coming in the near future.

I don’t have all of these devices in-house for review, but I would like to offer a completely rundown of what is available, including a very interesting new charger that I’ll be buying as soon as possible. I’ll note when I have and have not used a particular charger.

The Nokia Wireless Charging Plate is the firm’s bare-bones wireless charging solution, just a flat colored slab that you can easily place anywhere handy for charging convenience. I’ve been using this as my main wireless charger for the past month or so, and it’s sitting right below my PC’s screen so I can keep my smart phone at the ready.

The version I have happens to be yellow, but it comes in red and cyan as well, so you can match it to your phone or mix and match as your fashion sense demands. There’s nothing to configure or do, really: Just place your smart phone on the slab. The phone itself will issue a “charging” chime and a tiny white light at the front of the charging plate flips on to let you know it’s working. It’s simple and effective.

The second difference is that the Pillow, like the JBL speaker noted below, sports helpful guides so you can align the phone properly. That said, these guides don’t light up at all, so you’ll need to go by the device’s “charging” chime if you’re positioning it in the dark.

The Pillow also comes in multiple colors, this time yellow, black, cyan, white, and red, so it spans basically the entire range of Lumia device colors. I’ve got a red one, and it’s a great match with the red Lumia 920. It costs $79.99.

I don’t have this device on hand, but it’s the next step up from both the Wireless Charging Plate and Pillow. It physically resembles a Wireless Charging Plate that’s been stuck, vertically and at a slight angle, into a stand, such that the display of the phone sitting on its surface could be easily seen. And for good reason: This stand can also use NFC to trigger the launching of an application while on the charger. (It also features a tiny white charging light on the front of the stand, much like the similar light on the Wireless Charging Stand.)

Since I don’t have this one on hand, I recommend checking out Daniel Rubino’s Quick review – Nokia Wireless Charging Stand.

The Nokia Wireless Charging Stand is available in black or white and costs $69.00.

I already reviewed this product—see JBL PowerUp Wireless Charging Speaker for the details—and it’s emerged as my favorite wireless charging device by far. There are two reasons for this. One, it’s also a surprisingly high-quality speaker, so it’s got a nice dual-use functionality that I appreciate. And two, with its light-guided alignment, this is perhaps the easiest wireless charger to use, even in the dark.

As noted in my review, the JBL PowerUp is a premium desktop/table speaker that costs about $250, so it’s not in everyone’s price range. But if you want both the wireless charging and an exceptional speaker, this one is hard to beat.

This one is not available yet, but I’ll be buying one as soon as it is available. The Nokia Wireless Car Charger was announced last month at Mobile World Congress and will let you mount your Lumia handset in either landscape or portrait mode in your vehicle, charging it while you use the device for navigation, music, or Bluetooth-based phone calls.

In a nice touch, the charger’s power adapter sports a USB port so you can even use it to charge a second device. The Wireless Car Charger will ship in May and should cost about $99.99.