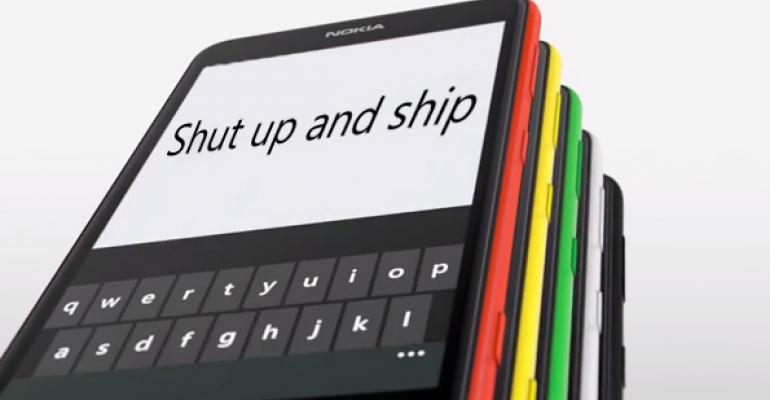 Shut up and ship. But don't forget the "ship" part

A set of revealing quotes by a Nokia vice president pretty much sums up my feelings about Windows Phone as well: It’s an awesome platform with plenty of potential, and built for the long haul. But Microsoft needs to wake up. Like, now.

With the world rapidly turning to mobile devices, Microsoft is basically ignoring its best mobile platform. And with the rest of Microsoft moving to a rapid release cycle, the Windows Phone team has actually slowed down development this year. It’s inexcusable that we won’t see a Windows Phone 8.1 release by the end of 2013.

No need to belabor this point, as I’ve made it many times before.

I’ll just let Nokia vice president Byran Biniak do the talking. In an interview with International Business Times—which has the most annoying web site I’ve seen in a long while, featuring an auto-playing video and an automatic page reset that retriggers that playback if you pause it—Mr. Biniak has some choice words about Windows Phone and Microsoft. Interestingly, much of it is about apps, echoing a point I made about Windows Phone this week in Is Android Fragmentation a Lie?.

Microsoft is not moving quickly enough to evolve the platform

“We are trying to evolve the cultural thinking [at Microsoft] to say ‘time is of the essence.’ Waiting until the end of your fiscal year when you need to close your targets, doesn’t do us any good when I have phones to sell today.”

“As a company we don’t want to rely on somebody else and sit and wait for them to get it right.”

It’s about time someone that matters spoke out against Microsoft’s slowness with Windows Phone. It’s inexcusable.

“To give you a reason to switch, I need to make sure the apps that you care about on your device are not only on our phones, but are better,” he says. “I also need to provide you unique experiences that you can’t get on your other devices.”

IBN says that Biniak doesn’t believe there are any ‘major gaps” in the Windows Phone app catalog but admits there are “select apps that need to be there.” I agree with both points fully.

By the end of 2013, Windows Phone will be at a point where “people will be hard-pressed to say ‘it doesn’t have this app’ and it makes a material difference. I don’t think there will be any [app developers] we don’t have commercial agreements with, and so maybe it’s not published by the end of the year but it will be published before the end of [March].” This isn’t Nokia’s fault, but Microsoft had a similar internal goal. For the first half of 2012. Yes, really.

“We are releasing new devices frequently and for every new device, if there is an app that somebody cares about that’s not there that’s a missed opportunity of a sale.”

Is up to Nokia to “reinforce the message” that Microsoft has to change its practices when it comes to mobile, since a strong platform and app catalog are the keys to success. “People rely on app for their day-to-day life and if you don’t have something which I use in my day-to-day life I’m not going to switch [platforms] because I don’t want to compromise the way I live my life just to switch to a phone. "It’s not just about the hardware, it’s about the tools that are on the hardware. You can’t sell a phone without the apps, you just can’t.”

There you have it. My frustrations, expressed perfectly.