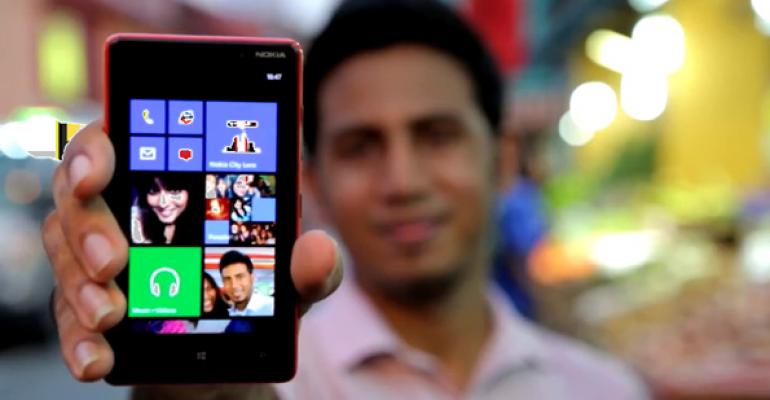 With its latest Lumia handsets, Nokia has finally settled into a groove that I think makes the most sense for its customers: Most of the firm’s Windows Phones now sport a more customizable form factor that lets users change the color of the devices on the fly to suit their mood or changing tastes. This is a big deal, and one that makes Nokia’s Lumias far more attractive to potential customers.

Hopefully, this is the direction Nokia takes for all of it Windows Phone handsets going forward. To date, however, its flagship devices—the Lumia 800, 900, and 920, in turn, have utilized a unibody design. They’re attractive enough, of course, and when first introduced this type of design was certainly unique. But with a bit of use, the downsides are evident.

First, at least in the case of Nokia’s currently in-market devices, the unibody design leads to heavier and thicker form factors. The Lumia 920 is a beast of a phone, not just thick and heavy, but also dense, like lead. This doesn’t offset its many benefits fully—the unit I’m now testing has an amazing camera and a gorgeous and larget HD+ display—but let’s just say we won’t be seeing many women or children carting this thing around. It’s hefty.

Second, and again in the case of Nokia’s devices, the unibody design for some reason preempts the inclusion of micro-SD expansion, something Nokia offers on all of its (Windows Phone 8-based) non-unibody smart phones. I’m not clear on why this can’t happen—after all, the SIM slot is a similar size and shape—but with the exception of the newly announced Lumia 720, no Lumia unibody device has offered micro-SD expansion.

Third, because unibody designs are totally sealed, you can’t replace the battery yourself or on the go. This means you can’t pack an extra battery to extend your usage time while traveling.

Finally and perhaps most important, the unibody designs most compelling technical achievement, an even coloring that pervades through the device and not just on the surface, is also its biggest weakness. A cyan blue Lumia was a breath of fresh air 18 months ago, but with many people considering their smart phone a fashion statement as well as a utility, these deep-seated colors can get old quick. And because of their heft, adding a color case to the Lumia 920 is impractical. (And, thanks to the unibody design, otherwise unnecessary.)

Related to this third point is the availability of colors. There’s a reason early unibody Lumias were only cyan, and that subsequent models are available only in a limited selection of colors: These colors are most easily reproduced accurately across a variety of materials, allowing accessories to match exactly. This is an issue car makers also face, since many auto body parts are made of different materials and thus “take” color paint differently.

With this all in mind, Nokia seems to be moving past its unibody designs, or at least incorporating the customization capabilities of its non-unibody products into all new Lumias. For Windows Phone 8, the firm now offers a range of devices and all of them, except for the flagship Lumia 920 that debuted last year (and the Lumia 720), feature similar body types with a removal back shell. These include the Lumia 820 (and related Lumia 822 and Lumia 810) that debuted at the Windows Phone 8 launch last year, the low-cost Lumia 620, and now the new Lumia 720 and Lumia 520 that were just announced at Mobile World Congress.

(Yes, the Lumia 720 does in fact have a unibody design, though at 9mm thick, it’s pretty thin and in fact even thinner than the non-unibody Lumia 820. But it still offers exchangeable wireless charging covers, available in multiple colors. For this reason, I recommend getting black 720 if you go with this model.)

This customization ability isn’t just about fashion. It allows Nokia to sell the devices more cheaply and then integrate additional functionality, like wireless charging, into the separate back plates, each of which is available in different colors. Presumably they could also offer separate back shells without this functionality as well. And let’s not forget that these designs have user-replaceable batteries, so road warriors can pack an extra battery while away from home.

This design makes an otherwise pedestrian device like the Lumia 820 suddenly very compelling. And Nokia has taken this design to a new level with the Lumia 620, which offers “double shot” shells that blend two colors together—like yellow and green or yellow and red—in very attractive ways. So far, this is unique to the 620, but it really makes a low-end, small phone a heck of a lot more fun.

If Nokia’s devices are successful enough, third parties will make their own color shells and, perhaps, designer shells similar to the variety of cases we see today for the iPhone. But Nokia is already offering a variety of Lumia accessories in different colors, too, including speakers, portable USB chargers, wireless chargers, and more.

Put simply, Nokia’s eye for design and the move to replaceable color shells on most Lumia handsets has made this device lineup more attractive than ever, literally. It’s one of many reasons to choose Nokia over competing handsets. I’ll be looking at more reasons soon.