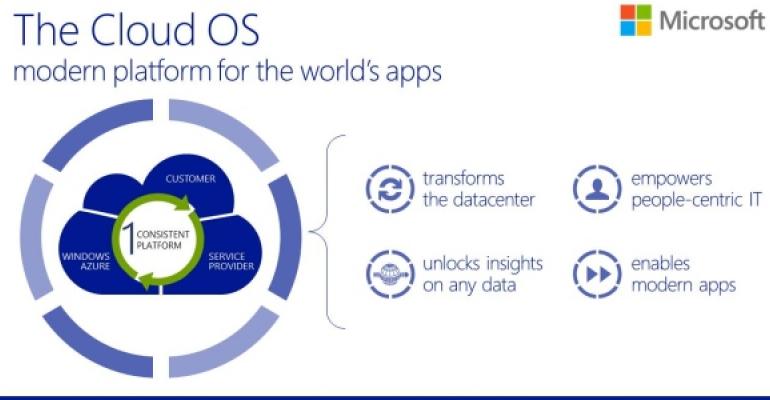 As great as Windows Server 2012's capabilities are, managing a large collection of these servers is still not trivial. And if you want to build a private cloud with them, it's downright impossible if you don’t have a management suite. Today, Microsoft announced new capabilities for managing mobile devices from the cloud, and its overall vision for integrating the customer data center, the Azure public cloud, and third-party service providers with Windows Server 2012 and System Center 2012 Service Pack 1.

System Center 2012 SP1 has a big, two-part mission. The first part is to update System Center to support all the capabilities of Windows Server 2012 (a not inconsiderable task all by itself). The second part is to roll up the management of these capabilities into a higher-level, more holistic and integrated environment: Microsoft's "Cloud OS", the company's mission to make deploying and managing Microsoft-based cloud computing seamless between company data centers running Windows Server 2012, Windows Azure services, and third party service providers.

As my colleague Paul Thurrott mentioned in his interview with Microsoft Distinguished Engineer Jeffrey Snover (who is chief architect for Windows Server 2012 and has added System Center 2012 onto his list of responsibilities), “The Cloud OS shifts the focus forever,” he said. “It’s not a single server anymore. It’s a data-center mindset now.”

That’s quite a bit of scaling up.

Another new service announced is the Global Service Monitor. Like Operations Manager’s synthetic transactions (real time actions that simulate a customer’s actions to monitor an application or service’s performance) writ large, the Global Service Monitor provides synthetic transaction monitoring at any one of many Azure points of presence around the world. This allows System Center / Azure customers to monitor the performance of their Azure service wherever their customers are accessing it – not just from the datacenter where the tools are installed.

Overall, the Cloud OS that integrates the entire Server and Tools division’s products is quite a grand vision; no other company produces software from the below-the-OS hypervisor through to public-cloud scale cloud services. There are a lot of moving parts that comprise this architecture, so it’ll be interesting to see how well Microsoft’s vision actually knits together in practice for the IT pro or service architect.