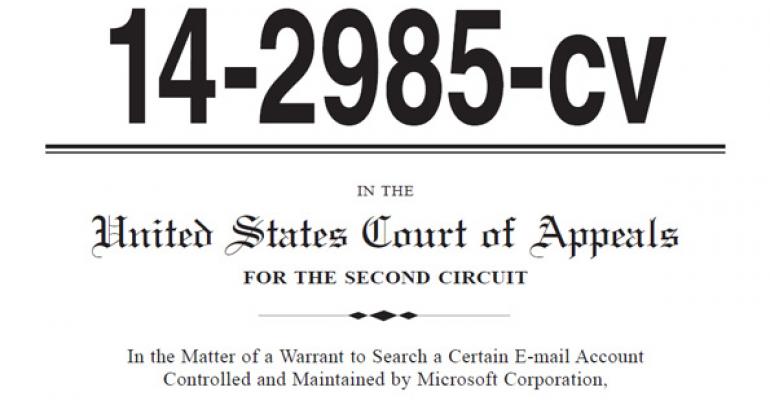 Yep, it's come to this

On Monday, Microsoft filed an appeal in its ongoing case challenging a federal warrant seeking customer data stored overseas in its Ireland-based datacenter. In the appeal, the software giant argues that email seizure should be held to the same standard the government has established for obtaining physical evidence outside the United States.

"This case and these principles are as important to Americans as they are to people elsewhere around the world," Microsoft general counsel Brad Smith writes in a blog that was created solely for this case. If the Government prevails, how can it complain if foreign agents require tech companies to download emails stored in the U.S.? This is a question the Department of Justice hasn’t yet addressed, much less answered. Yet the Golden Rule applies to international relations as well as to other human interaction.

Microsoft has this entire year fighting the government's December 2013 attempt to get it to turn over data stored in a customer account in Ireland. In April, a federal court denied Microsoft's annulment request, and in June the company officially objected to that ruling. In late August, Microsoft said it would continue to ignore the warrant until the cast wound its way through the appeals process.

Microsoft's appeal, laboriously tilted In the Matter of a Warrant to Search a Certain E-mail Account Controlled and Maintained by Microsoft Corporation, spells out the company's position very clearly. And it adds a few cautionary remarks about the US government enhancing the scope of its information gathering capabilities too broadly.

"The power to embark on unilateral law enforcement incursions into a foreign sovereign country—directly or indirectly—has profound foreign policy consequences," the appeal notes. "Worse still, it threatens the privacy of US citizens ... If the Government prevails here, the United States will have no ground to complain when foreign agents—be they friend or foe—raid Microsoft offices in their jurisdictions and order them to download US citizens' private emails from computers located in this country."

"We believe the Government should follow the processes it has established for itself for obtaining physical evidence outside the United States," Mr. Smith's blog post explains. "And we believe in the need to strike a better balance between security and privacy. That's why we brought this case and why we continue to call on both the Administration and Congress to introduce reforms."