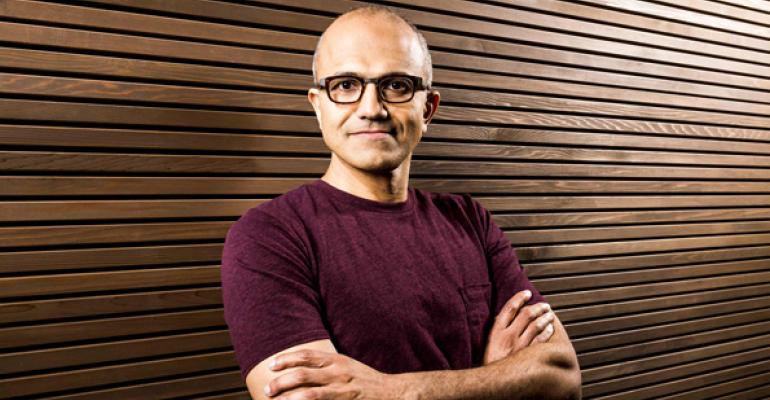 Microsoft on Tuesday announced that it has selected Satya Nadella to be its new CEO, replacing Steve Ballmer. Cofounder Bill Gates will step down as chairman of the board of directors—to be replaced by John Thompson—and will act as technology advisor to the new CEO.

"Our industry does not respect tradition, it only respects innovation," Nadella said in a prepared statement. "The opportunity ahead for Microsoft is vast, but to seize it, we must move faster, focus, and continue to transform. I see a big part of my job as accelerating our ability to bring innovative products to our customers more quickly."

Mr. Nadella is 46 years old and a 22-year Microsoft veteran who most recently led the firm's Cloud and Enterprise and Server and Tools groups. As I noted yesterday in "It's Time for Microsoft to Make the Right CEO Choice," he was the ideal internal candidate for the CEO position at a firm that has grown large and complex over the past few decades.

In many ways, the most interesting part of this story is how it impacts some of the other key leaders at the firm. Microsoft has declined to reveal yet who will succeed Mr. Nadella in the Cloud and Enterprise group, but Bill Gates, Steve Ballmer, and John Thompson are all moving into new roles at the company.

Bill Gates has stepped down as Microsoft's chairman of the board and has assumed the title Technology Advisor to the CEO. In this role, he will significantly "step up" the amount of time he spends working at Microsoft, and will devote a third of his time overall to this new job. He will help Mr. Nadella define the next round of product offerings that come out of Microsoft, he says.

"I'm very excited about the choice of Satya Nadella to be the CEO of Microsoft," Mr. Gates said. "Satya has the right background to lead the company in this era. There's a challenge in mobile computing. And there's an opportunity in the cloud."

Outgoing CEO Steve Ballmer will assume a position on Microsoft's board of directors. "Today couldn't be a better day," he said. "I love this company." In an email to employees, Mr. Ballmer wrote that he was "pumped" for the future of Microsoft and that the firm's senior leadership team has never been stronger.

Microsoft board member John Thompson led the search for the new CEO, and he will now assume the title of chairman of the board. After a very "deliberate" search, he claims that Mr. Nadella was the search committee's "first and unanimous" choice to be the new CEO. Many have correctly noted that Thompson, an industry veteran, might have made an excellent choice for CEO as well. But Thompson never wanted that position and will now work closely with Nadella and the board to guide Microsoft's strategy.

"This is a software-powered world," he wrote. "I am here because we have unparalleled capability to make an impact ... Many companies aspire to change the world. But very few have all the elements required: talent, resources, and perseverance. Microsoft has proven that it has all three in abundance. And as the new CEO, I can’t ask for a better foundation."

You can learn more about Satya Nadella at Microsoft's new interactive site introducing its new CEO.