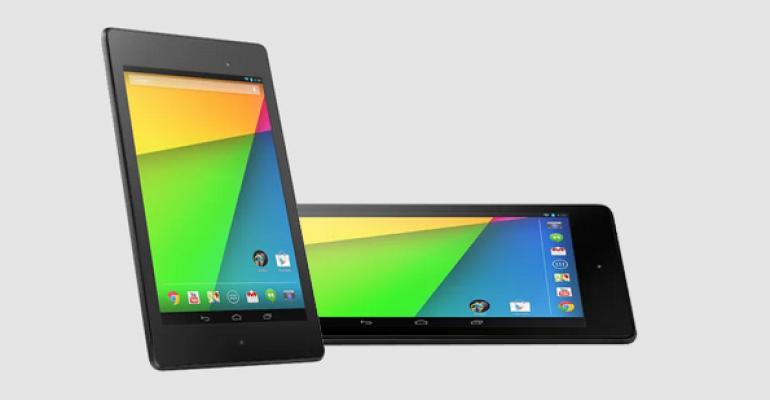 One of the best mini-tablets gets a lot better

Google this week announced a second generation version of its popular Nexus 7 mini-tablet. Shipping next week, the new Nexus 7 sports a 1080p display, a thinner and lighter form factor, a brand-new Android version, and optional cross-carrier LTE capabilities. It’s better and much less expensive than the iPad mini. Is this your next mini-tablet?

With Windows still lagging behind in this crucial market—mini-tablets have been driving tablet sales since the release of the first Amazon Kindle Fire—this is perhaps a more pressing question than you believe. Even before the release of this device, the mini-tablet has basically been split between three popular choices: The afore-mentioned Kindle Fire, the first-generation Nexus 7, and of course Apple’s, the iPad mini, which was late to market but is quite good.

So now Google is striking back with a new entry. Thanks to my schedule, I won’t be able to grab a unit until mid-August—I’m traveling until then—but here are some observations from the launch event.

First, the specs. It’s more portable, with a 2mm thinner form factor and 3 mm less bezel on all four sides. Overall, its 50 grams lighter than the original model, which I think is quite portable. Google says this new design will be even better for one-handed use and it fits in a jacket pocket or purse nicely.

The display is the same 7-inch size as before, but now it packs in a lot more pixels. It jumps from a 1280 x 800 resolution in the original version to 1920 x 1200. And the pixels per inch (PPI) count jumps from 216 to 323, which Google says makes it both the highest DPI of any tablet in the market and the highest resolution 7-inch tablet in the world.

High-density screens make a big difference with both text and image display, of course, and corresponding pushes by Google into e-textbooks and the availability of more HD video content through the Google Play store and from third party solutions like Netflix will make these improvements come alive. A bunch of great-looking new games won’t hurt either.

Google is also bringing stereo speakers to the Nexus 7, which is long overdue, and has added virtual surround sound, which I’ve already basically experienced and enjoy on the Kindle Fire HD. It features front (1.2 megapixel) and rear (5 MP) cameras. Inside is a quad core, 1.5 GHz Snapdragon S4 Pro, which Google says provides 1.8x the CPU performance and four times the graphics performance of the previous Nexus 7. It has 2 GB of RAM, double the first Nexus.

The new Nexus 7 will also support Wi-Fi (802.11a/b/g/n), Bluetooth 4, and optional 4G LTE on one model; that latter capability is “unlocked,” Google says, and will work with AT&T, T-Mobile or Verizon, all from one device, which is pretty impressive. It has HDMI out, NFC, and Qi-based wireless charging like the Nexus 4.

Best of all, battery life is up 1 hour to 9 hours of HD video or 10 hours of web browsing. This despite the dramatically higher resolution. Pretty impressive.

Looking over that list, we see specs that beat the 2012-era Kindle Fire HD and Apple iPad mini, though it’s fair to believe that both—as well as other competitors—will offer their own retina-class updates this year. But we now have the new bar that they need to reach.

The Nexus 7 also arrives with a brand-new version of Android OS, Jelly Bean 4.3. It’s the first device to ship with this new OS, though Google will be bringing it to the existing Nexus 7 as well as the Nexus 4, Nexus 10, and the Galaxy Nexus (the predecessor to the Nexus 4 handset). The Nexus editions of the HTC One and Galaxy S4 will also get this update “very soon.”

A few new features stand out. Where Android Jelly Bean 4.2 provided multi-user support, 4.3 adds restricted profiles for parental control functionality. So you can now control content and apps at the user level, giving parents peace of mind. It features an update to Bluetooth called Smart technology that provides more seamless pairing with low-power device like fitness monitors. And it includes OpenGL ES 3.0, for that 1080p streaming functionality that Netflix and others. Google says that it has already pushed Android 4.3 pushed out to the original Nexus 7, Nexus 4 and Galaxy Nexus, but I have each of those devices and have yet to see the update.

Google will sell three models of the new Nexus 7. The first two, a 16 GB version with Wi-Fi that will cost $229 and a 32 GB Wi-Fi version for $269, go on sale July 30 from Google Play and many, many electronics retailers. A 32 GB version with “unlocked” LTE will cost $349 and appear in the coming weeks. By comparison, a 16 GB iPad mini—which lacks the high PPI screen, NFC, wireless charging and other features—costs $329, a full $100 more than the Nexus 7. A 32 GB iPad mini with LTE—where you’d have to specifically choose between AT&T, T-Mobile and Verizon—costs an incredible $559, an astonishing $220 more than the equivalent Nexus 7, which not only provides those additional features but also unlocked LTE. The new Nexus 7 isn’t just powerful, it’s thrifty.

For these and other reasons, I will be reviewing the Nexus 7 in the next month. It will just need to wait until I get back from my coming trip. But on paper at least, this thing looks like a winner.

In the meantime, you can find out more about the new Nexus 7 on the Google Play web site.