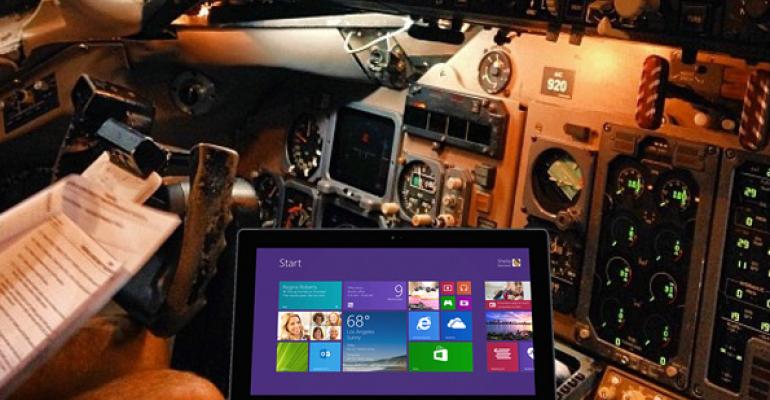 Delta to Distribute Surface 2 to Pilots

Original plan was to use the Nokia Windows RT tablet

Delta will distribute Microsoft Surface 2 tablets to its pilots and not Nokia's "Sirius" tablet as originally planned. The move comes in the wake of a deal to distribute Nokia Lumia 820 smart phones to nearly 19,000 flight attendants.

I wrote about the original Delta deal in Delta Equips 19,000 Flight Attendants with Windows Phone Handsets, but added an exclusive: Delta's pilots would soon be given Windows tablets as well. What I didn't reveal at the time was that Delta originally planned to go with Nokia for the tablets as well: That firm was set to launch its long-awaited Sirius tablet, which would run Windows RT, by the end of October.

But now the plans have changed: Delta's pilots will be given Surface 2 tablets instead.

"In less than two years, Delta cockpits will be paperless as we roll-out the Microsoft Surface 2 tablet running Windows 8.1 RT as our company-issued device," the airline alerted its employees recently. "The 757/767 fleet will be the first to make the transition with the 777, 747 and MD88 as fast followers. Look for an announcement from Delta and Microsoft in the coming days about our partnership on the initiative."

Delta currently allows pilots to bring their own iPads with them on flights. But with the move to company-standard Surface 2 devices, that could be changing. It wants "current iPad Bring Your Own Device (BYOD) users to transition to a company-issued device."

As for Nokia, it's not clear at this time whether it will follow through on its plans to release its Sirius tablet given recent news of Microsoft's buyout offer for the firm's devices and services businesses, and the redundancy of that device with Microsoft's Surface tablets. I exclusively revealed details about this planned device in Fall 2013 Windows Tablet Preview. But it could still happen, of course, and Nokia is now planning an October press announcement that could involve several devices.