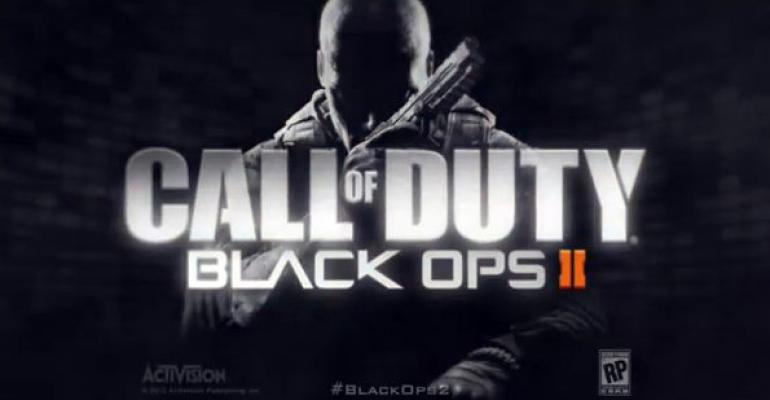 Black Ops 2 is the best Call of Duty yet. Is that enough?

The latest entry in the lucrative “Call of Duty” series, “Black Ops 2,” earned an incredible $500 million in its first 24 hours, Activision reported. That’s over twice as much as the Xbox 360 exclusive “Halo 4,” but more important it’s also a significant gain over last year’s “Call of Duty: Modern Warfare 3,” which earned a then-record $400 million on opening day.

By comparison, the latest James Bond movie, “Skyfall,” was the strongest start ever in the history of that franchise. But it earned only $87.8 million over its first three days of sales in North America last weekend.

To me, that’s not the issue.

The issue is whether Black Ops 2 is any good.

Visually, it’s a feast. As with Halo 4, which also offers significantly updated graphics, I’m surprised to see game makers able to improve things this much so late in the Xbox 360’s lifecycle. I figured we had crossed some line, and that each game would simply achieve the same, sometimes stale level of graphics quality we’ve become used to. Both Halo 4 and BO2 surpass previous games. They’re both beautiful.

Call of Duty has long been derided for its rail-like single player experiences. And while I agree that they’ve always been linear, the COD stories have also always been excellent, especially the ones that were based on real World War 2 history. As the series has moved further and further from that historical rooting, I’ve begun to lose interest. But this is true on the Halo side, as well, and those games owe more to classic science fiction (which few of its fans even realize) than to any in-house imagination. With BO2, there’s been an attempt to branch out the story a bit with decisions that impact the outcome, a first for this series. I’m not particularly interested.

Multiplayer, of course, has always been the real reason for COD’s success, just as it has with Halo. And here, Black Ops benefits from the superiority of this experience, offering the best-yet combination of excellent, balanced maps, amazingly (if overly) configurable weapons load-outs and, as with MW3, the notion of ongoing improvements via new map packs and other add-ons over time. Multiplayer is the gift that keeps on giving, and while it’s fair to say this is evolution, it’s evolution of something that was already pretty much perfect.

I happen to prefer COD to Halo by a wide margin, and Black Ops 2 is the best COD yet, obviously. But I can understand the argument that both of these sequels are indications that the respective series are getting a bit tired. I’m curious to see where COD goes next. Halo? I really couldn’t care less.

By the way, the Black Ops 2 TV commercial is pretty excellent: