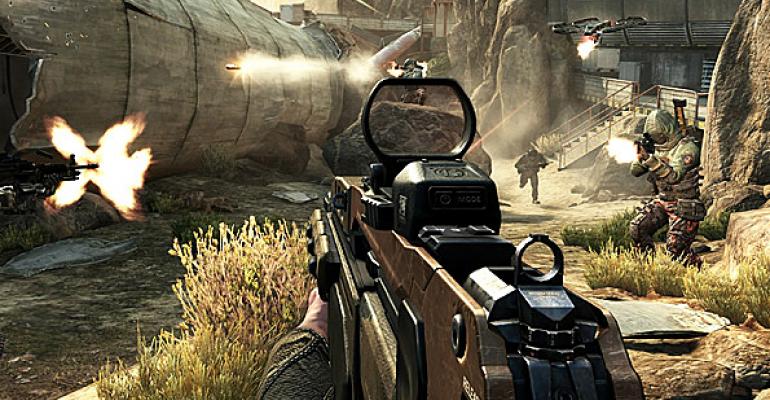 Activision’s “Call of Duty: Black Ops II” has continued the series’ record-breaking streak, racking up $1 billion in grosses in its first 15 days in the market, faster than the 16-day pace its predecessor, Modern Warfare 3, required. Additionally, Activision says that gamers have now logged 150 million hours of online play via Xbox LIVE and PlayStation Network.

Those are big numbers. By comparison, the movie “Avatar” took 17 days to reach the $1 billion threshold.

I, too, have spent a lot of time playing Black Ops II, which beats out Halo 4 as my choice for the best game of the year by a pretty wide margin. Black Ops II achieved this by offering single player and multiplayer experiences that are both better than previous Call of Duty games and better than those offered by the competition.

Since COD single player experiences are always a well-constructed, game maker Treyarch had to live up to the lofty storyline expectations set by previous games, which it did. I’m only partway through that single player experience, but it’s unfolding nicely and is well-done. But Treyarch also exceeded previous COD games, unexpectedly, by offering a branching storyline—a first for COD—and optional side missions.

That said, multiplayer is where I’ve spent the most time by far—I’ve already prestiged three times—and here Treyarch has done something much more dramatically positive. Through the simple inclusion of a “pick ten” system, where you can basically hold varied combinations of 10 things like guns, attachments, perks, and other objects, Black Ops II offers what will forever be the baseline for shooter load outs. You just can’t go back to older systems once you’ve used this.

Multiplayer is still very complex, and I have no idea how someone new to shooters would ever be able to figure out what’s going on. There are wild cards, score streaks (which aren’t attached to specific load outs), challenges, league play, weapon prestiges, and many other new and different elements. There’s just a lot going on here, and I’m embarrassed to say I’ve needed my son’s help figuring some of this stuff out. (His usual response, upon hearing one of my many questions: “Noob.”)

And then there’s the Zombies game mode and, of course, COD TV and the Black Ops II Season Pass, which provides early access to map packs throughout the next year. Black Ops II is the gift that keeps on giving.

Put simply, I’m not surprised that Black Ops II is doing so well. As with previous games, it’s a winning combination of the best available single player and multiplayer experiences there are, and it’s easily the best game in the market right now. But as a long-time fan of Call of Duty, I’m curious where they go with this series next. Black Ops, like Modern Warfare, seems to have a well-defined arc, and while there’s no way they’ll ever go back to World War II, Activision needs to figure out a viable long-term strategy for the series. The next one can’t be “future wars.”