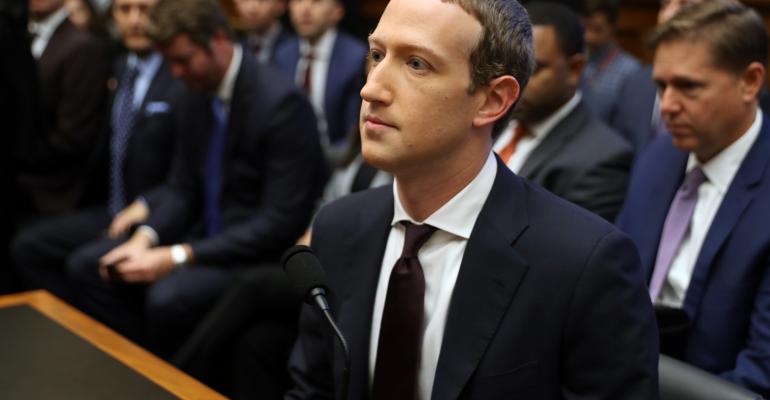 Zuckerberg Gets Thrown a Long List of Grievances by Congress

Lawmakers made it clear that they are skeptical that Facebook should be trusted with the tremendous power it has amassed over 2.7 billion global users.

(Bloomberg) -- Mark Zuckerberg was ready for a Congressional interrogation on Facebook Inc.’s cryptocurrency project. On the stand for more than six hours Wednesday, he got a lashing on every other controversy facing the social media giant, too.

The 35-year-old chief executive officer arrived on Capitol Hill prepared to defend the company’s plans for Libra, describing the advantages of a global digital coin that would help open up financial systems to the poor and underbanked around the world. From the start of his testimony to the House Financial Services Committee, however, lawmakers made it clear that beyond the questions they had over the new currency, they are skeptical that Facebook should be trusted with the tremendous power it has amassed over 2.7 billion global users.

During the CEO’s lengthy appearance, many of Washington’s grievances about Facebook were laid bare. There were heated questions about Facebook’s refusal to fact-check political ads; accusations of rampant child exploitation on the platform; Facebook’s move to encryption and the impact that would have on the ability to obscure criminals; the company’s continued problems with election interference heading into the 2020 presidential election; what it’s doing to prevent “deepfakes,” or manipulated videos; and critiques of its poor record on workforce diversity.

“I think you can appreciate using a person’s past behavior to determine their future behavior,” said Representative Alexandria Ocasio-Cortez, a first-term Democrat from New York. “In order for us to make decisions about Libra, we have to dig into Facebook’s past behavior in respect to democracy.” She then dove into a line of questioning about what Zuckerberg knew and when regarding the Cambridge Analytica data-privacy scandal that erupted in 2018.

Committee Chairwoman Maxine Waters set the tone early on in a tweet she sent just as the hearing got underway.

Waters, a California Democrat, said Facebook should stop work on its cryptocurrency project until the company addresses a series of unrelated “deficiencies” in its social-media business.

Zuckerberg vowed to try to address lawmakers’ concerns but also said he hoped to “address the risk of not innovating. I don’t know if Libra is going to work, but I believe in trying new things.”

He also conceded that it has been “a challenging few years for Facebook.” The company has acknowledged the unauthorized use of private user information by U.K. research firm Cambridge Analytica, shut down several state-backed disinformation campaigns, been targeted with multiple antitrust investigations and been hammered for taking money to publish false political advertising.

Facebook has gone to great lengths to try to rehabilitate its image. For years, Zuckerberg had described his social network’s purpose as “connecting the world,” but that mission ended up as a grow-at-all-costs strategy that created blind spots on how the platform could be used in harmful ways, such as live-streaming terrorist shootings and attacks. Zuckerberg last testified to congress in April 2018, answering 10 hours of questions about how Facebook allowed app developers to collect data on users, and how the platform was used by Russia to influence the 2016 presidential election.

The company spent a record $4.8 million on lobbying in the third quarter, according to federal disclosures filed Monday, up 70% from the same period a year earlier. Since October 2018, Facebook has hired 12 external lobbying firms to supplement the 11 lobbyists it counts among its own employees, according to the company’s filings. Facebook brought on many of the outside firms to support the launch of Libra.

Waters has been one of the loudest critics in Congress of Facebook’s effort to create the Libra digital token. When the social-media giant first announced its plans in June, she almost immediately demanded that the company halt development. Government officials and central bankers in Europe have also raised concerns about how the project would protect users’ privacy and prevent criminals from using it to launder money.

Facebook sent David Marcus, the executive who leads the company’s blockchain team and has so far served as the de-facto leader for Libra, to address the same committee in July. He too spent much of his time defending his employer for its previous missteps, and trying to convince Congress that people will be able to use Libra without ever having to use Facebook.

Zuckerberg reiterated Wednesday that he has no intention of launching the cryptocurrency without approval from U.S. regulators. That was a point of contention and confusion before the Libra Association was officially formed this month.

Though he has made the promise before, Zuckerberg took it a step further on Wednesday, saying that Facebook could even be forced to leave the Libra Association entirely if the group decides to move forward with the currency without approval from U.S. regulators. It’s an unlikely scenario, but Zuckerberg’s suggestion that Facebook could abandon a project it started is meant to appease lawmakers who have pushed back aggressively. Zuckerberg said he wants the project to meet or even exceed U.S. government standards.

At the same time, Zuckerberg made the case that if the U.S. doesn’t lead in innovation, specifically in areas like cryptocurrency, then China will leap ahead.

“We can’t sit here and assume that because America is today the leader that it will always get to be the leader if we don’t innovate,” he said.

But members of Congress poked holes in Zuckerberg’s argument that Libra would improve America’s dominance in finance around the world. If that were the case, why would Libra need a home base in Switzerland, with a global roster of members and need to be backed by multiple currencies beyond the U.S. dollar? How would the currency actually work, and would it allow transactions that were anonymous or non-refundable?

Zuckerberg didn’t have many answers. The Libra product is still just an idea, and its launch will require agreements by association members on how it will function and fit within global regulatory frameworks. He said he didn’t know whether other Libra members were planning to contribute money to back the currency, and that the idea of anonymous transactions is still “an open question.”

Facebook originally had 27 partners that planned to join it in the Libra Association, which is supposed to share in the governance of the cryptocurrency. Recently about a fourth of those original members dropped out, including PayPal Holdings Inc., Mastercard Inc. and Visa Inc. Ann Wagner, a Missouri Republican, said the departure of those members was a disturbing sign. Zuckerberg said some of Libra’s early partners abandoned the project probably because it was risky and because of the intense regulatory scrutiny. Facebook has made an effort to make clear that the social network won’t be solely responsible for managing Libra.

Several lawmakers questioned Facebook’s motives for basing the Libra Association in Switzerland instead of in the U.S. A big part of other crypto companies’ decision to set up in the country is the flexible tax treatment they can get. There has also been much clearer regulatory guidance from the Swiss compared to U.S. regulators like the IRS or SEC. And Zuckerberg said he views the financial infrastructure in the U.S. as outdated.

Zuckerberg, who has a personal interest in cryptocurrencies, came prepared with lofty arguments about Libra’s purpose: It could help reduce income inequality by giving people -- including 14 million in the U.S. without access to bank accounts -- an easier, faster and cheaper way to send money around the world. At the same time, it would secure America’s international financial leadership, since Libra would be backed mostly by the U.S. dollar, especially if the cryptocurrency is allowed to launch prior to similar planned efforts in China.

But lawmakers pushed Facebook to clearly outline the business reasons for the project -- beyond the pitch meant to appeal to regulators. Facebook envisions Libra being incorporated into the company’s various messaging apps including WhatsApp and Facebook Messenger. The company believes that the currency could help benefit its existing advertising business, or create opportunity for new revenue streams. Zuckerberg said in the hearing that Libra will eventually help boost Facebook’s ad prices, but he later said Libra is more than a business plan and that he’s “certainly not doing this because I am trying to make more money.”

At the hearing’s end, there was still no consensus on what lawmakers would need to be comfortable with the project. It’s still unclear what agencies or bodies will regulate Libra and when it will actually launch.

Patrick McHenry, the ranking Republican on the committee, said he’s not sure lawmakers learned anything new.

“We don’t have a deeper understanding of how Libra would work.”

Zuckerberg will have another attempt to clarify when he responds to potentially hundreds of pages of written questions from the legislators.