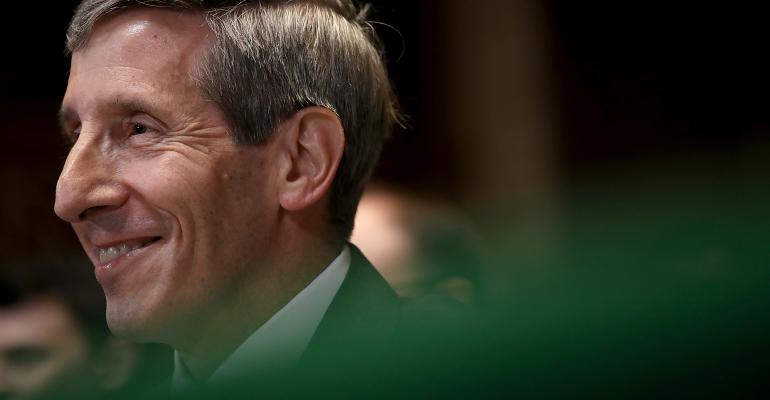 Career antitrust lawyer Joe Simons said he doesn’t feel political pressure to heed Donald Trump’s accusations against Amazon.com Inc. and Alphabet Inc.’s Google as he steers an agency that could bring those companies and others, including Facebook Inc., to heel on antitrust and privacy issues.

“I was basically retired before I took this job,” Simons, who previously served two stints at the FTC, said Tuesday in an interview. “I’m just going to go back into retirement once I’m finished here, so it doesn’t really matter to me.”

The career antitrust lawyer said he doesn’t feel political pressure to heed Trump’s accusations against Amazon.com Inc. and Alphabet Inc.’s Google as he steers an agency that could bring those companies and others, including Facebook Inc., to heel on antitrust and privacy issues.

Trump has attacked tech companies and their chief executive officers in barrages of tweets as well as public remarks. He has made unsupported claims that social media companies silence conservative views, while assailing Amazon for edging out brick-and-mortar retailers and criticizing its founder Jeff Bezos, who owns the Washington Post.

“I’d have to be a monk not to hear them,” Simons said.

He said his staff ignores Trump’s broadsides over tech companies’ dominance and treatment of Republicans because their job is to look for evidence of legal violations.

The allegations by Trump and his allies that the companies systematically muzzle conservative voices couldn’t form the basis of an FTC probe because the issue falls outside the purview of the antitrust and consumer protection laws the agency enforces, Simons said.

“We don’t have the authority or the expertise to deal with political speech,” he said. “Not on the antitrust side, not on the consumer protection side.”

The FTC, which shares antitrust jurisdiction with the Justice Department, is an independent agency. It’s run by five commissioners from both political parties who are named by the president and confirmed by the Senate.

The president could remove any commissioner -- including the chairman -- for “inefficiency, neglect of duty, or malfeasance,” according to the agency’s statute. That’s never happened. The one president who tried -- Franklin D. Roosevelt -- was rebuffed by the Supreme Court.

For now, at least, Simons is sounding tough on his approach to the tech platforms, a position that appears to align him with Trump. In the interview, he outlined his willingness to try to break up companies if his agency’s broad review of the industry finds acquisitions of startups were anticompetitive -- even if the FTC signed off on them the first time. Simons said such breakups could be challenging, but they might be the right remedy to rein in dominant companies and restore competition.

“If you have to, you do it,” Simons said about breaking up tech companies. “It’s not ideal because it’s very messy. But if you have to you have to.”

Simons also said the agency is interested in hearing complaints that Amazon is punishing merchants that offer lower prices on other e-commerce websites, a practice on which Bloomberg has reported. He stopped short of confirming the agency has opened a formal probe into how Amazon treats third-party sellers on its marketplace.

Simons declined to comment on reports that the White House is considering an order that would direct the Federal Communications Commission to narrow liability protections for large technology platforms. The companies currently enjoy a legal shield for how they treat content that third parties post. That shield is coming under increasing criticism from conservatives, who want to pare the use of the exemption. The draft order provides a peripheral role for the FTC, CNN has reported.

With technology giants under siege by members of both parties and as partisan debates intensify with the approach of the 2020 elections, the FTC chairman reiterated that political pressures would have no gravity at his agency.

“They just look for the facts and do the analysis,” he said. “It’s law enforcement.”