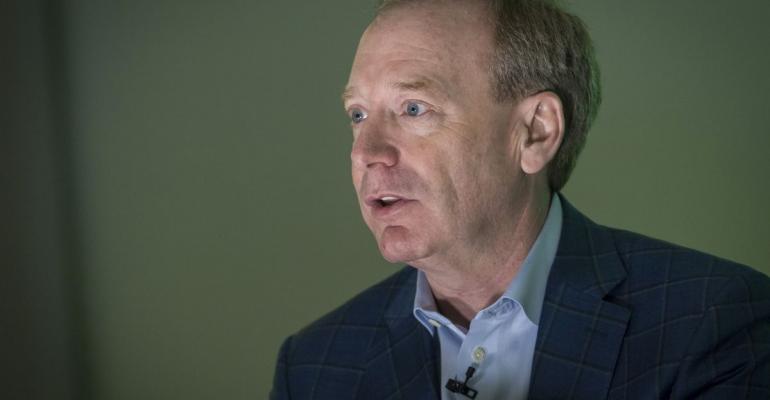 Microsoft Corp. President Brad Smith, whose company does not have a video-hosting site like Google’s YouTube or Facebook Inc., said that tech companies can no longer "think of their platforms akin to a postal service without regard to the responsibilities embraced by other content publishers."

(Bloomberg) -- Microsoft Corp. President Brad Smith waded into the debate over what legal duties tech should have for content in the wake of the mosque killings in New Zealand.

"There are legal responsibilities that need to be discussed," Smith, who’s also the software maker’s chief legal officer, wrote in a Sunday blog post that said a company team had begun a pre-planned trip to the country the day before.

After video of the killings went viral on social media, some policy-makers urged that these sites take greater responsibility for stemming the spread of violent content. Prime Minister Jacinda Ardern told parliament that it cannot accept that "what is said is not the responsibility of the place where they are published."

In the U.S., tech platforms generally have immunity for the content that users post, but protections vary around the world. It was not immediately clear how Smith would change policy, although he appeared open to solutions that went beyond industry best practices and self-regulation.

Smith, whose company does not have a video-hosting site like Google’s YouTube or Facebook Inc., said that tech companies can no longer "think of their platforms akin to a postal service without regard to the responsibilities embraced by other content publishers."

He urged prevention that advanced video-identification technologies, as well as "browser-based solutions -- building on ideas like safe search -- to block the accessing of such content at the point when people attempt to view and download it." He also urged consideration of a “major event” protocol, in which tech companies would work from a joint virtual command center during a major incident.