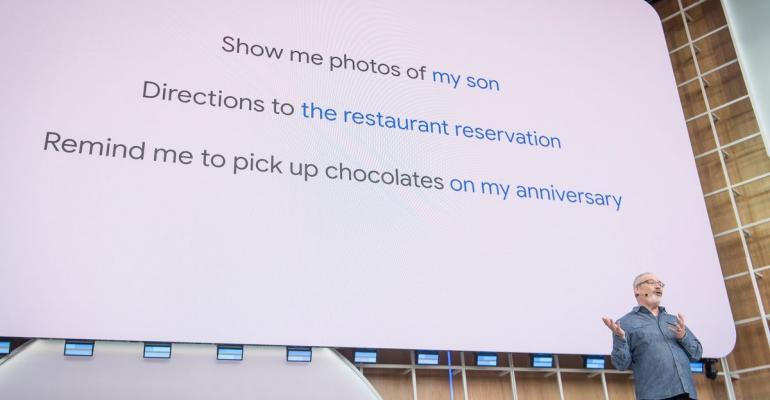 Google unveiled a slew of new privacy features at its annual developer conference on Tuesday, but the internet giant also gave users new reasons to give the company even more of their personal information.

(Bloomberg) -- Google unveiled a slew of new privacy features at its annual developer conference on Tuesday, but the internet giant also gave users new reasons to give the company even more of their personal information.

The company has always offered a trade-off between convenience and privacy, but the latest Google Assistant technology unveiled at the I/O event in Mountain View, California, increases this tension.

Engineering executive Scott Huffman showed off a "Personal References" capability that helps the Assistant better understand users’ relationships to other people, places and dates. This is an extension of the company’s Knowledge Graph, a giant database of things in the world and how they are connected. Google already understands "the Starbucks near the Golden Gate bridge." Now the company wants to know who your family is when you say "mom" or "my son."

Huffman said questions can be phrased more naturally now. In a demonstration on stage, the executive asked what the weather will be like at his mom’s house this weekend -- without saying her name. He also asked for directions and how long it will take to get there. The Assistant answered by showing information from Google Maps, including an address in Carmichael, California -- although this was presented with a generic street name and house number.

When this technology rolls out in coming months, it will make the Assistant easier to use and more helpful, Google said. But it only works if users tell the Assistant personal details, such as their parents’ contact information.

"It goes beyond mom," Huffman said. "If you’ve shared important people, places and things with the Assistant, you’ll be able to ask for things more naturally. Like ‘show me photos of my son’ or ‘directions to the restaurant reservation’ or ‘remind me to pick up chocolates on my anniversary.’"

Google is betting that the extra convenience will persuade people to keep sharing personal information such as who their kids are and the date of their anniversary. Such data will help the company build this new, more personal, version of its Knowledge Graph.

The company also tried to convince the world that it will be a responsible steward of all this data. At the end of his presentation, Huffman noted that users can edit or delete their information at any time from an updated "You" tab in the Assistant settings menu.

"People have clear meaningful choices around their data," Chief Executive Officer Sundar Pichai said. "We strongly believe that privacy and security are for everyone, not just the few."

As he spoke, a small plane circled the outdoor amphitheater pulling a sign that read "GOOGLE CONTROL IS NOT PRIVACY #SAVELOCALNEWS."

Privacy and data-security issues have taken on more urgency since the uproar over consulting firm Cambridge Analytica improperly accessing information on millions of Facebook Inc. users. The social-media giant preached privacy during its developer conference earlier this month, and a California law set to kick in next year will crackdown on how tech giants collect data and get user approval for this information collection.

This is an existential threat for Google. The Alphabet Inc. unit gets about 85 percent of its revenue from digital advertising that is targeted with mountains of user data. Without that, its ads would be less valuable.

The rise of digital assistants have raised new privacy concerns. Earlier this year, Bloomberg reported that Amazon.com Inc. employs thousands of people who listen to voice recordings captured in the homes and offices of people who own the company’s Echo speakers. At Google, some reviewers can access some audio snippets from its Assistant to help train and improve the product, but it’s not associated with any personally identifiable information and the audio is distorted, the internet company has said.

On Tuesday, Pichai and other executives unveiled many more new features and products. Here are the other highlights from the first day of the I/O conference:

Google plans an "incognito" mode for Google Maps, YouTube and Search. This has been available on the company’s Chrome browser for years and limits some data-sharing when users surf the web. There are also tighter rules for how websites track people who use Chrome. The company will also put privacy controls on the first page of settings menus in its apps, and let users delete their data more easily.

Google showed off new tricks from is Lens camera app. Point your phone at a receipt, and the software will help you calculate the tip and divide the bill. Aim it at a restaurant menu, and Google will show pictures of each dish and which ones are most popular.

Slower processors and cheaper materials helped Google price the new Pixel 3a with a 5.6-inch screen at $399. A larger Pixel 3a XL has a 6-inch screen and costs $479. That’s roughly half the price of the company’s existing Pixel phones, before recent discounts.

Android users will get more control over which apps can track their location and other identifying features. The company also showed off "Project Mainline" a new method for upgrading Android software more frequently to keep it secure from hackers trying to take advantage of bugs.