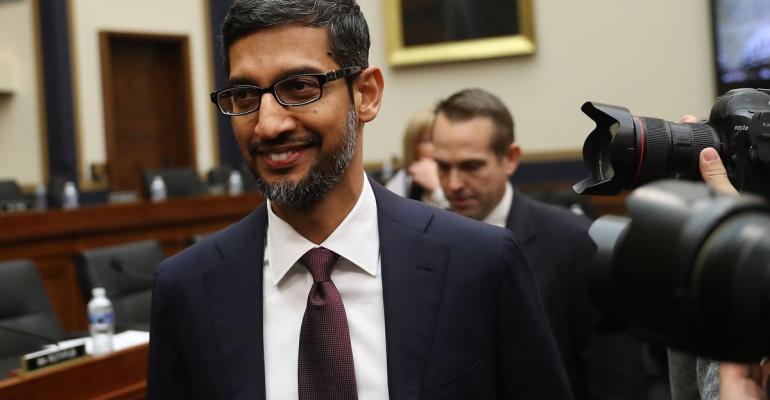 Google Chief Executive Officer Sundar Pichai kicked off his first appearance before Congress Tuesday stressing the company’s American roots as lawmakers from both parties criticized the world’s largest search engine over issues including political bias, privacy and its ambitions to re-enter the Chinese market.

(Bloomberg) -- Google Chief Executive Officer Sundar Pichai kicked off his first appearance before Congress Tuesday stressing the company’s American roots as lawmakers from both parties criticized the world’s largest search engine over issues including political bias, privacy and its ambitions to re-enter the Chinese market.

"As an American company, we cherish the values and freedoms that have allowed us to grow and serve so many users," Pichai said in opening remarks released by the committee on Monday. "I am proud to say we do work, and we will continue to work, with the government to keep our country safe and secure."

Pichai’s testimony started with the memory of his empty chair during a September hearing he skipped still fresh in lawmakers minds. It caps a year filled with setbacks and stumbles that chilled relations between tech giants and Capitol Hill. Revelations over foreign election interference, damaging privacy breaches and accusations of political bias are just some of the issues Pichai will be grilled about.

Pichai agreed to appear before the House Judiciary Committee -- the first time a Google CEO has testified before Congress -- to address "potential bias and the need for greater transparency regarding the filtering practices."

"It was necessary to convene this hearing because of the widening gap of distrust between technology companies and the American people," House Majority Leader Kevin McCarthy said at the top of the hearing, citing China, antitrust and anticonservative bias as concerns.

McCarthy, a California Republican once viewed as close to tech, has been a prime mover behind the hearing and accusations of political bias. Democrats, who will take over the committee in 2019, have also previously pushed Silicon Valley officials on concerns about their size, foreign countries’ use of tech platforms to try to influence elections and a lack of workforce diversity.

The much-watched hearing got off to a boisterous start with Donald Trump associate Roger Stone in the room along with far-right conspiracy theorist Alex Jones, who shouted at Pichai about China as the CEO entered the hearing room.

"You bet on the wrong country, Sundar!" Jones said, calling the company "absolutely the most evil corporation on Earth."

The Infowars personality, who has accused tech platforms of censoring him, previously appeared outside a September hearing with Twitter Inc. Chief Executive Officer Jack Dorsey and Facebook Chief Operating Officer Sheryl Sandberg, which resulted in his ban from Twitter for abusive behavior.

Concerns about Google’s plans to re-enter China, codenamed "Dragonfly," have roiled both employees of company and members of Congress. Pichai has insisted the initiative is an experiment.

"In order to protect free speech we need to have companies that are promoting that and are negotiating and holding out for that in countries like China," the panel’s Republican chairman, Representative Bob Goodlatte said in a Monday interview with Fox Business.

Politicians have already demanded to know why Google seems willing to censor search results at the behest of Chinese Community Party but has pulled back from two contracts with the U.S. military.

Google stopped providing its search engine in China in 2008 after the government demanded results be censored. But the world’s largest internet market is attractive to any global company, and a return could signal Google is prioritizing its business over human rights.

In his prepared remarks, the CEO also reiterated Google’s support for a national privacy law, which could gain momentum next year, in part because diverse business groups have backed plans to that would preempt California’s stringent new privacy law. Such a law would represent yet more regulation of the tech sector, after Google lost a battle earlier in the year to stop Congress from increasing internet platforms’ liability for online sex trafficking.

The industry has also been criticized for spreading misinformation and extreme content online, while privacy breaches and other mishaps have shaken the public’s faith in its ability to keep customer data safe and use it wisely.

“We’re long past that high water mark of Silicon Valley’s belief that they can solve these problems on their own or ignore the public pressure,’’ said Danny O’Brien, international director with the Electronic Frontier Foundation, an advocacy group.

One top goal for Pichai will be to neutralize accusations that Google silences conservative voices in search and news. There is no evidence of systematic political bias by Google and social media companies, but conservatives have seized on liberal employees’ barely concealed disdain for Trump to make the point. To silence one part of the political spectrum "would go against our core principles and our business interests," Pichai said.