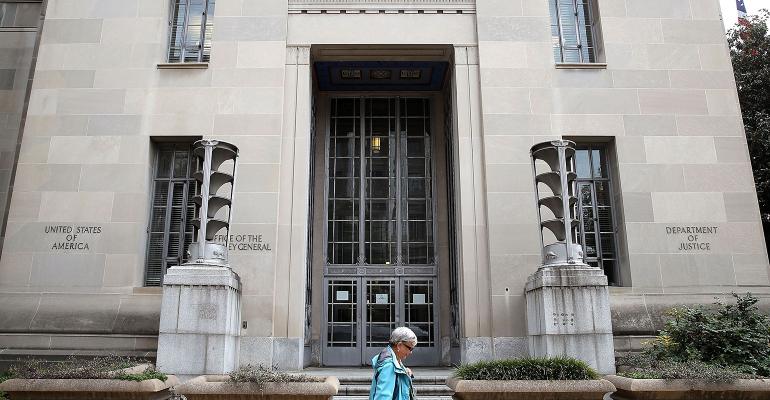 The FTC appeared to be firing a shot at colleagues over at the Justice Department’s antitrust division on Tuesday when it announced that it’s demanding information on hundreds of smaller acquisitions by five technology giants that avoided regulatory scrutiny over the last decade.

(Bloomberg) -- On paper, the Justice Department and the Federal Trade Commission are co-equals when it comes to making sure companies compete freely and fairly. Lately, however, the two antitrust enforcers seem to need a referee of their own as they pursue dueling probes of the U.S.’s internet giants.

The FTC appeared to be firing a shot at colleagues over at the Justice Department’s antitrust division on Tuesday when it announced that it’s demanding information on hundreds of smaller acquisitions by five technology giants that avoided regulatory scrutiny over the last decade.

The Justice Department, under the close watch of Attorney General William Barr, is already running its own broad inquiry of the huge internet platforms. So are most states and several congressional committees. Companies “trying to make decisions with some level of comfort and certainty” are finding out that there is little of either, said Barbara Sicalides, a partner at law firm Pepper Hamilton LLP. “That is very scary for businesses.”

Some interpreted the FTC move as a sign it won’t cede ground to the Justice Department on antitrust investigations of tech companies. It came a day after the White House proposed a hefty 13% increase in the budget of the Justice Department’s antitrust division, which would allow it to fill 87 positions, while the FTC’s request was essentially flat.

The same day, one of Congress’s leading tech antagonists, Republican Senator Josh Hawley of Missouri, snubbed the FTC by proposing that the Justice Department absorb the independent agency. “The FTC really could bring an analytic capacity to DOJ that would really make the enforcement stronger,” said Hawley, who nonetheless praised the FTC initiative.

Some antitrust experts found the senator’s suggestion worrisome, coming as Barr is accused of politicizing his department by doing President Donald Trump’s bidding, rather than following the rule of law.

Similar allegations have been aimed at Barr’s antitrust chief, Makan Delrahim, whose division will take the unusual step of presenting arguments in federal court on Thursday against the FTC in a case involving mobile phone chipmaker Qualcomm Inc. -- a former Delrahim client. “What we’re seeing is a very, very different DOJ under the Trump administration,” said Diana Moss, president of the American Antitrust Institute. “I’m really talking unprecedented.”

Both agencies declined to discuss specific cases and downplayed the friction. “The FTC hasn’t lost any territory to grab back,” said Ian Conner, who directs the FTC’s competition bureau. But Conner said it would be a bad idea to combine the Justice Department with the FTC, which he said was created out of concern that Justice in the past didn’t have the tools or interest to perform studies like the one the FTC just opened.

The FTC made its sweeping request to Facebook Inc., Amazon.com Inc., Google parent Alphabet Inc., Apple Inc. and Microsoft Corp. under Section 6(b) of the FTC Act. That authority allows it to collect non-public information from companies that can bolster its understanding of markets.

The information it gathers can’t be shared with the Justice Department but could be used to open its own enforcement actions, which could lead to information sharing. FTC Chairman Joe Simons said the information would be used to produce a study for “research and policy,” but it could also result in the FTC trying to unwind transactions it finds problematic.

The FTC’s aggressiveness contrasts with its recent track record on tech companies, which some have criticized as weak. It cleared Facebook’s acquisitions of Instagram and WhatsApp, two deals now seen by some as anticompetitive, and it closed a 2013 Google investigation into whether the company was skewing search results, even as the European Union went on to rack up $9 billion in fines against Google.

The new effort could produce a large amount of proprietary information, giving the FTC an advantage over its rival two blocks away. From 2010 to 2019, the Big Five tech companies made at least 362 acquisitions that were likely below the threshold that triggers a government review, which ranged from $63.4 million in 2010 to $90 million in 2019, according to data compiled by Bloomberg.

Counting deals above and below the threshold, the Big Five racked up 418 acquisitions with a combined value of more than $137 billion in the last decade, the data show.

The two agencies have seemed to be engaged in one-upmanship over the technology sector for most of the past year. The FTC’s Simons made good on a promise to scrutinize dominant tech companies when he formed a task force in February 2019 to investigate potentially anticompetitive conduct. Facebook disclosed in June that it was under investigation by the agency and Bloomberg reported in September that a team of FTC investigators had begun interviewing companies that sell products on Amazon to determine if the e-commerce giant is using its market power to stifle smaller competitors.

The Justice Department, meanwhile, announced its own broad antitrust inquiry into the technology companies in July. In saying the review would focus on search, online retail services and social media platforms, the DOJ did little to conceal it was targeting Google, Amazon and Facebook. In October, Facebook disclosed it was also the target of a Justice Department investigation.

The competition between the two competition enforcers isn’t sitting well with some lawmakers. “In the past, the agencies have avoided too much mischief because they have generally played well with each other. This appears to have, regrettably, changed,” said Senator Mike Lee, a Utah Republican, at a September hearing of his antitrust subcommittee, with the two agency heads sitting before him. “None of this makes for effective or efficient antitrust enforcement,” Lee added.

The agencies usually figure out a way to agree on which one will tackle a merger or a type of conduct in a process called clearance. Technology is one sector where the agencies have passed jurisdiction back and forth, over Google in particular. During the Obama administration, they worked out a deal where the FTC probed anticompetitive conduct and the DOJ reviewed mergers.

Simons and Delrahim reached such an agreement in May, when they met in Cartagena, Colombia, during an antitrust conference. There, they agreed to divvy up investigations of four of the five largest tech companies, with the Justice Department taking Google and Apple, and the FTC taking Amazon and Facebook. Delrahim since recused himself from the division’s Google inquiry.

The brokered peace didn’t last long. Within weeks, the Justice Department said it would do its own investigations of the large internet platforms. Barr was unhappy that his antitrust chief had conceded authority to the FTC, Bloomberg reported. Barr further prodded the division to investigate Facebook specifically, even though the FTC had already won clearance for a probe, Bloomberg also reported.

Nowhere is the rivalry on more vivid display than in the Qualcomm case. The FTC won a lawsuit in May when a judge ruled that Qualcomm had abused its dominant position in the market for mobile phone chips and ordered the company to change how it gets licensing fees from Apple and other phone makers.

Delrahim signaled his displeasure with the ruling against his former client in a speech in Paris last June, and on Thursday the two agencies will be in the courtroom on opposite sides, arguing against each other. “It is a remarkably hostile gesture by the Department of Justice to do this,” said William Kovacic, a former FTC commissioner who is now a professor at George Washington University Law School. “That’s an outward sign of the deeper difference between the two agencies.” Delrahim and Simons are recused from the litigation.

Delrahim also raised eyebrows in September when he started an antitrust investigation of four automakers that had agreed with California to follow tougher emissions standards than those wanted by the Trump administration. The probe, which was dropped last week, was seen as retaliation for rejecting Trump’s attempt to roll back stringent rules set under President Barack Obama.

In 2018, Delrahim unsuccessfully tried to block AT&T Inc.’s merger with Time Warner Inc., alleging it would give the combined company too much market power. Critics said it was because of Trump’s antipathy for Time Warner’s CNN unit. Then the antitrust chief waved through Walt Disney Co.’s acquisition of most of 21st Century Fox Inc., which was sold by Trump confidant Rupert Murdoch, as he restructured his family media empire.

The antitrust division has denied that it’s influenced by politics. The FTC is an independent, bipartisan agency controlled by the party of the president.

Some Washington groups are pleased by the rivalry. The competing probes follow years of criticism that antitrust enforcers haven’t done enough to rein in the internet companies. “If there is a competition between them to be more aggressive on antitrust and tech, that’s a good thing,” said Sarah Miller, executive director of the American Economic Liberties Project and an advocate of tech breakups.

But for the tech companies, it means they’re facing a barrage of overlapping and potentially conflicting enforcement decisions by Washington. Populist fervor against big tech has been building for a long time, said Robert Atkinson, president of the Information Technology and Innovation Foundation. The FTC’s action “may be an indication that we’ve reached peak panic.”