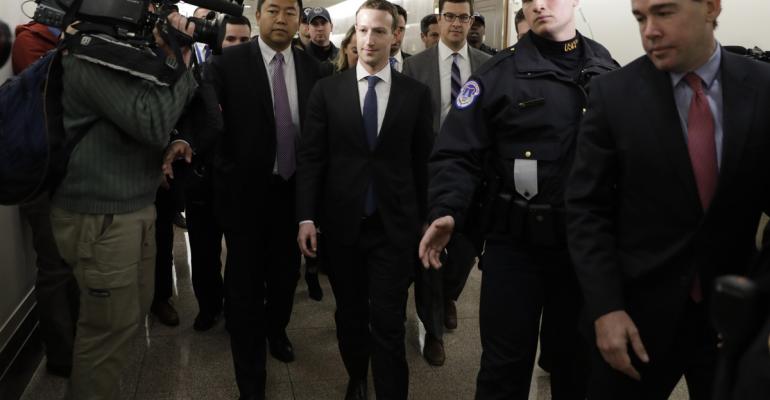 For years, the company released features quickly, then tracked user responses to decide whether to push on. The creations may not have been perfect, but the key was speed -- hence the company mantra.

(Bloomberg) --Mark Zuckerberg has a well-worn strategy for fixing Facebook flaws. The company launches products, people complain, and then it decides if there’s anything it should change once the furor gets loud enough.

That “move fast and break things” strategy will come under considerable scrutiny when Zuckerberg kicks off two days of congressional testimony on Tuesday. Lawmakers will grill Facebook Inc.’s chief executive officer on issues ranging from the troves of data vacuumed up by app developers and political consultant Cambridge Analytica to Russian operatives’ use of the social network to spread misinformation and discord during the 2016 U.S. presidential election.

Beyond the political theater, a more epic reckoning is at hand: The way Facebook builds products will change forever.

For years, the company released features quickly, then tracked user responses to decide whether to push on. The creations may not have been perfect, but the key was speed -- hence the company mantra. It worked. Facebook attracted 2 billion users and became an advertising colossus. But the approach also meant executives didn’t know what was going on all the time so they’ve often been reactive rather than proactive when things go awry.

While the company motto was officially retired in 2014, the strategy remained deeply rooted in Facebook’s engineering ranks. Going forward, Zuckerberg will need to become more hands-on in setting limits on what his engineers do with user data -- before launching products and even if users agree to hand over their information.

In prepared remarks released Monday, the Facebook chief made clear that business as usual is not an option. Facebook, Zuckerberg said, hasn’t thought about its responsibility to users broadly enough, until now. “We have a responsibility to not just build tools, but make sure those tools are used for good,” Zuckerberg wrote.

Facebook was built to get people to use it more and share more frequently. The more activity, the more data Facebook collects, and the more precisely advertisers can target their ads. Product development was shaped by user activity and surveys more than by Zuckerberg himself, employees have said.

Zuckerberg’s priority for Facebook “was always growth and the best experience for users,” said Don Graham, an early investor and former board member, in a Facebook post Monday, defending the CEO.

The company moved so quickly that Zuckerberg didn’t always have time to think through potential negative consequences of product upgrades and changes. In fact, the company sometimes waited for the public or the media to find issues. In Zuckerberg’s prepared remarks, he acknowledged Facebook learned what it knows about the Cambridge Analytica data leak from the media.

Even the figure Facebook released last week, stating that the leak could have affected 87 million users, was just an estimate. When it was building the developer tools, it didn’t include a way to track data once it left Facebook.

Zuckerberg is the antithesis of Apple Inc. co-founder Steve Jobs, who often boasted that Apple tells people what they want, not the other way around. By contrast, the Facebook chief likes many teams tinkering with the social network at once, picking the moves that cause people to spend more time on Facebook. Warnings, when they come, tend to emanate from the public relations or policy departments.

In an interview with Bloomberg Businessweek last year, before Facebook understood the scope of Russian meddling in the election or data leaks from developers, Zuckerberg said he builds products optimistically.

“If you’re trying to take on something complex, you’re going to get blamed for not fully understanding the problem upfront, even though it is really impossible to fully understand a problem when you’re doing a new thing,” Zuckerberg said. “It’s not like the question is, ‘was this thing good or not.’ This is one building block and we need to build other building blocks.”

In other words, Facebook is an unfinished product, still being tweaked by public feedback. Zuckerberg is now paying for that stance. In the last two weeks, he and lieutenant Sheryl Sandberg have embarked on a team-by-team review of all Facebook’s products, asking engineers to think about how the company uses data, and whether it’s necessary to collect information to make the product better or improve ad targeting.

"Slowly and patiently, Mark, Sheryl and their team will make Facebook much better," Graham wrote on Monday. "Should they have acted sooner? Of course. Do they understand how angry many of their users are? I would bet a lot that the answer is yes. Watch the changes they will make."