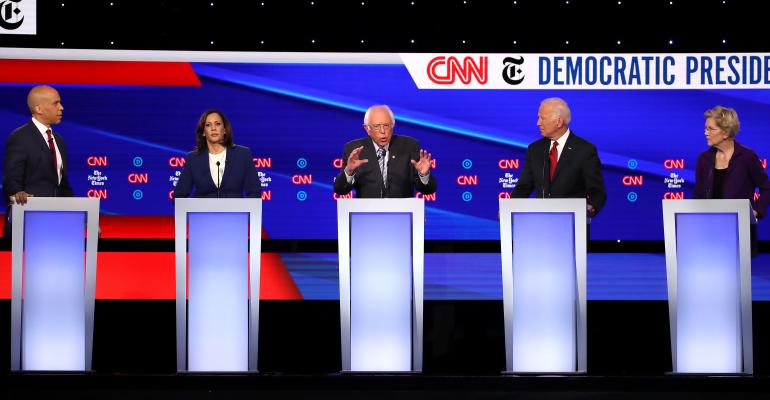 The debate underscored that support for a tougher approach to dealing with big technology companies goes beyond Senator Elizabeth Warren, who has called for breaking up Facebook, Google and Amazon.

(Bloomberg) -- Democratic presidential candidates vowed to rein in dominant tech companies through tougher antitrust enforcement, complaining that companies like Facebook Inc. and Amazon.com Inc. are too big and powerful.

The candidates said Tuesday night at the Democratic presidential debate in Ohio that the U.S. suffers from monopoly power across the economy and they supported more vigorous enforcement of antitrust laws.

“We have a massive crisis in our democracy with the way these tech companies are being used, not just in terms of anti-competitive practices but also to undermine our Democracy,” said Senator Cory Booker of New Jersey.

The debate underscored that support for a tougher approach to dealing with big technology companies goes beyond Senator Elizabeth Warren of Massachusetts, who has called for breaking up Facebook, Google and Amazon.

Warren called out Amazon specifically for running an online marketplace and competing with third-party sellers on the platform.

“You get to be the umpire in the baseball game or you get to have a team, but you don’t get to do both at the same time,” Warren said. “We need to enforce our antitrust laws. Break up these giant companies that are dominating – big tech, big pharma, big oil. all of them.”

Still, there were differences among them in approach. Andrew Yang said breaking up tech companies won’t revive main street businesses. Former Texas Representative Beto O’Rourke said tech companies should be treated like publishers instead of like utilities. He criticized Warren for targeting specific companies, something he said President Donald Trump has done.

“We will be unafraid to break up big businesses if we have to do that,” he said. “But I don’t think it’s the role of a president or a candidate for the presidency to specifically call out which companies will be broken up.”

Harris and O’Rourke criticized social media companies for unevenly enforcing their rules for political content. Their comments came days after Warren’s campaign bought Facebook ads claiming Chief Executive Officer Mark Zuckerberg had endorsed President Donald Trump -- a falsehood quickly corrected in the ad itself but used to showcase that politicians can lie on the platform.

Tech companies are facing rising bipartisan pressure throughout the U.S., and the Trump administration, Congress and even the states have quickly ramped up pressure on the companies, particularly on the question of whether they use their size to squelch competition.

Alphabet Inc.’s Google faces antitrust probes by the Justice Department, and a separate investigation by a group of 51 attorneys general led by Texas who have demanded documents on the company’s sprawling and lucrative digital ads business. The Federal Trade Commission is also speaking to third-party merchants who sell through Amazon, Bloomberg has reported.

Both the FTC and Justice Department, which split antitrust jurisdiction, are also probing the technology sector general, as is a congressional committee led by Democratic Representative David Cicilline that issued extensive document requests to Facebook, Google, Amazon and Apple Inc. in September.

After years of hands-off approach by policy-makers, Washington’s concerns have followed a swift decrease in the public’s positive attitudes toward big tech. Just 50% of U.S. adults said technology companies have a positive impact on the country, down from 71% in four years earlier, according to Pew Research Center survey results released July 29. Pew has previously found that a majority of Americans think tech wields too much power.