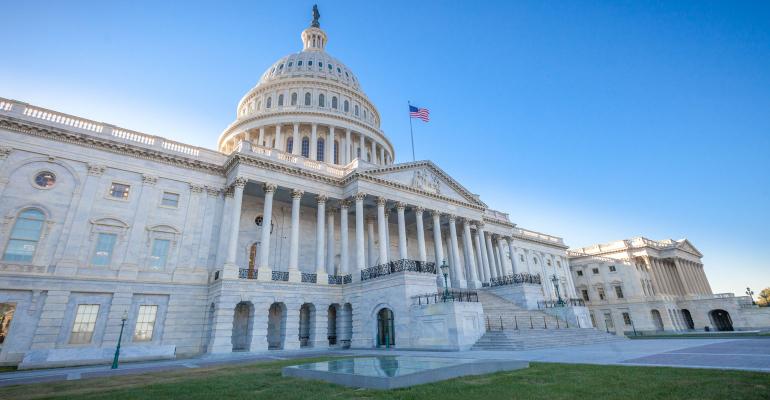 The white paper from the Computer & Communications Industry Association, which counts all four companies among its members, argues that a series of antitrust bills approved by the House Judiciary Committee in June would help foreign competitors, including Chinese and Russian companies, by placing severe restrictions solely on U.S. tech giants.

Many of the paper’s arguments echo warnings from technology groups and lawmakers who opposed the measures during a June hearing.

In part because of their size and ability to innovate, U.S. tech companies are valuable partners for the U.S. government and intelligence community to counter global cyber threats, according to Dan Coats, a former Republican senator and director of national intelligence who now works at law firm King & Spalding and helped write the report.

“A lot of people are talking about the pros and cons of the economic impacts and innovation, which is legitimate, but also take a look at the national security,” Coats said in an interview Friday.  He urged lawmakers to consult with House and Senate intelligence committees and federal agencies before voting on antitrust legislation that he said could have unintended consequences.

The House Judiciary Committee approved a series of six bipartisan antitrust bills, and four of them target Amazon, Apple, Facebook and Google. It’s not clear when or if those four bills will get a vote on the House floor. Senators on the antitrust subcommittee have said they plan to introduce some similar measures.

H.R. 3825    -- Would prohibit companies from having different lines of business. For example, Amazon would have to split its online retail from its logistics division.
Sponsored by:  Pramila Jayapal (D-WA), Lance Gooden (R-TX)

H.R. 3849    -- Would require interoperability so that users could move data like contacts and photos between platforms.
Sponsored by: Mary Gay Scanlon (D-PA), Burgess Owens (R-UT)

A spokesman for Representative Ken Buck, the ranking Republican on the House antitrust subcommittee, said Apple and Google “have already let the fox in the proverbial henhouse” by allowing China-related apps like TikTok and Alibaba in their app stores. Nick Givas, the spokesman, also mentioned steps taken by some tech companies to appease the Chinese Communist Party.

“Let’s be clear: Amazon, Apple, Facebook, and Google are hurting U.S. competition by engaging in anticompetitive practices,” Givas said. “Our bills will create competition and protect privacy rights for consumers.”

Arthur Sidney, vice president of the Computer & Communications Industry Association, said the committee should have taken more time to understand the national security implications before voting on the bills. He said the House antitrust subcommittee investigation that preceded the legislation was narrowly focused on four U.S. companies and didn’t consider the conduct of foreign competitors.

“This isn’t even antitrust, this is government-mandated industrial policy,” Sidney said in a Thursday phone interview. “Because the process was so rushed, there are a myriad of unintended consequences that are of issue for consumers, for the public, for national security.”

Although the express purpose of the some of the bills is to limit the size and reach of these companies, the CCIA paper argues that their scale helps them combat misinformation and aid law enforcement. The report cites company actions to remove foreign influence campaigns from China, Russia and Iran.

The paper doesn’t address the platforms’ ongoing struggle to identify and remove false or nefarious content, including bogus claims about democratic elections and the coronavirus pandemic.

The report also raises the concern that the bills’ interoperability provisions mandating equal access to user data and software could jeopardize intellectual property and consumer safety in the hands of some foreign companies. This presents a cybersecurity risk, the paper says, “if the key components of the digital architecture underlying the global economy are subject to compromise and espionage.”

Legislation that would force companies to divest certain lines of business or prohibit them from acquiring competitors would open an opportunity for global competitors to snap up those assets and U.S.-grown innovations, according to the CCIA report. Exempt from the bills’ constraints, the study says, foreign rivals would get the chance to surpass and displace Facebook, Google, Amazon and Apple.

Sidney said this is the exact opposite objective of another sweeping bill passed by the Senate in June to invest in U.S. innovation and industry to counter technological advances in China.

“The U.S. should have friends, at least in the U.S.,” Sidney said, saying the nation’s “technological ecosystem” gives companies the ability “to innovate, to become technologically supreme and important, and I think we ought to take pride in that and support that.”