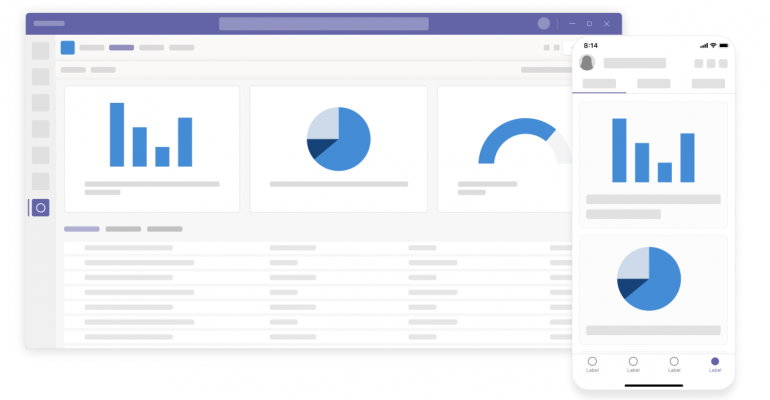 How does Microsoft follow the year in which its collaborative workspace platform turned into the backbone of workplaces that were suddenly forced into a remote environment? By doubling down on multiuser collaboration, team workflow and access to task-oriented data streams within Microsoft Teams apps.

Last month during Microsoft Build 2021, enhancements to the Microsoft Teams developer tools opened five new areas for expanding the interaction and meeting capabilities for company apps. Here’s our quick recap on each area and why it matters.

The first of the Microsoft Teams developer tools enhancements allows developers to access the current meeting view, also known as “the stage,” and provide collaborative tools like whiteboarding and design collaboration spaces within in Microsoft Teams. Each user can be visible on screen during the meeting alongside of the content they are working together on. Microsoft says this allows geographically distributed teams to work together while being able to read and respond to social cues like facial expression. Being able to read and react to sentiment while working on something with someone will be very important in a hybrid workforce post pandemic.

This enhancement is already available in preview.

In an effort to help automate some of the routine aspects of meeting online, this new set of APIs in Microsoft Teams apps allows meeting organizers to trigger the start of their scheduled meetings at the pre-determined time. In addition, the meeting close can also be scheduled and executed through this set of APIs.

This enhancement is already available in preview.

There are a lot of existing Together Mode scenes available as part of Microsoft Teams that will show an entire team in various locations such as a coffee shop, meeting rooms, auditorium, etc. depending on the number of team members. However, these are generic spaces and something all teams might be using. Imagine being able to custom design a company Together Mode that utilizes in-house meeting spaces to provide some company-specific familiarity for employees.

The feature is due to arrive this summer.

Also coming this summer, another of the newly announced Microsoft Teams developer tools will allow developers to use new media-related APIs to gain real time access to audio and video streams within meetings in order to provide specific transcription, translation, note taking, and insights gathering for their Microsoft Teams apps.

According to Microsoft, other media types will be added in the future for programmatic access.

Since these APIs will be tied to specific media content, IT admins will have the capability to view permissions for these apps from within the Microsoft Teams Admin Center to validate access to these various meeting media features and other Microsoft Teams developer tools.

Microsoft Developer Conference Shows Where Cloud Opportunity is Headed
May 09, 2019