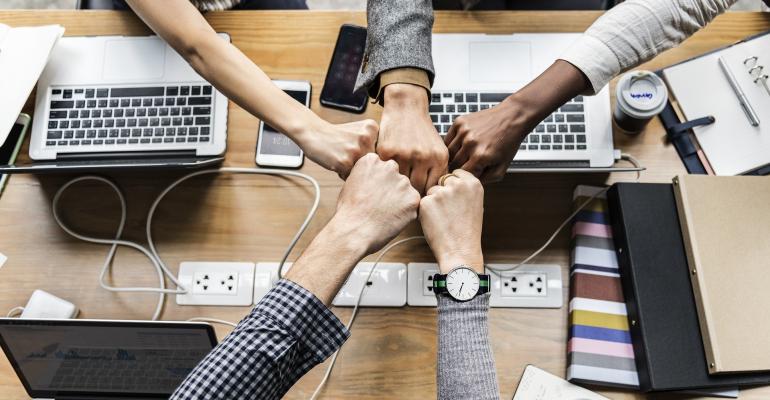 Well-known collaboration tools are getting renamed or retired. Also this week: how you can help with GitHub's work around open source sustainability/transparency, Microsoft's making it even easier to migrate to Azure,

Microsoft's been very clear about its plan to turn Teams into a centralized workspace. Its planned rebranding of Skype Room Systems to Microsoft Teams Rooms is an indication they're executing on that strategy. Skype Room Systems was Microsoft's line of partner-built videoconferencing and meeting room devices, with companies like Crestron, HP, Lenovo, Logitech and Polycom providing hardware incorporating traditional teleconferencing capabilities and Skype integration.

Now, with the advent of Teams Rooms, the hardware will be getting expanded capabilities: A so-called "One Touch Join" feature on a room's console device will allow people to join meetings with the press of a button (instead of the "type in this ten-character code. Now say your name. Now ask if everyone can hear you. Now hit pound. Now ask who forgot to hit mute on their headset" experience). Another addition will add the ability to detect open conference spaces. The Teams Meeting button will also get an "Add a Room" enhancements to link conferencing room facilities.

The company rolled out the upgraded solutions internally first and has also updated its fast track guidance for upgrading customers from Skype for Business to Teams. (To participate in the FastTrack partner advisory program, an organization needs to have bought"at least 150 licenses from qualified Microsoft 365 plans.)

In other collaboration news: Google has announced the shutdown window for Google Hangouts -- October 2019. The company says that between April and September 2019, it'll add the following capabilities to Google Chat as a way of easing the transition from Hangouts to Chat: Integration with Gmail, chatting with external users, "an improved" video calling experience, and the ability to make calls with Google Voice. The transition is part of Google's plan to compete in the chat workspace area, per its blog entry: "Hangouts Chat and Hangouts Meet are the next generation of Hangouts that focus on team communication."

GitHub, recently acquired by Microsoft, has added a new open source product manager to its ranks and they are asking for your input about how to sustain the services open source approach. In order to hear from its user base, they have posted a short survey form to get your input and begin a dialog. The company also released details of the official requests for user information disclosure in their 2018 transparency report. During 2018 the number of requests handled by the company, 112, doubled compared to 2017 with each one requiring a subpoena for that info to be disclosed.

Azure Migrate is a new tool from Microsoft's cloud team to help companies move to Azure. The tool only supports VMware ecosystems but the company is currently in a private beta test of the tool to work in Hyper-V setups.

A recent industry report is estimating that the Compound Annual Growth Rate (CAGR) for Artificial Intelligence (AI) usage around CRM systems could reach nearly 41% by 2024 and be a $123 billion dollar business. According to the report, big players in this market are companies such as Microsoft, SAP, Adobe, Salesforce, and Oracle.

Collaboration in Microsoft's Skype communications service gets a new capability this week as Microsoft rolls out the integration of cloud-based file sharing with your contacts using the company's OneDrive storage service. It is available via a Skype Add-In across all supported markets and platforms with the exception of Mac and Linux based systems.

The latest perpetual version of Office 2019 has been available for Mac since last fall but Apple users can now use their Office 365 licensing and obtain the productivity suite directly from the Mac App Store. Two big benefits from this being added to the app store is that updates will be delivered through the store's functionality instead of a separate Office update process. New functionality will be rolled out on a regular basis under the Office 365 Software as a Service (SaaS) process compared to the slower process of receiving functionality and feature updates through the perpetual standalone version.