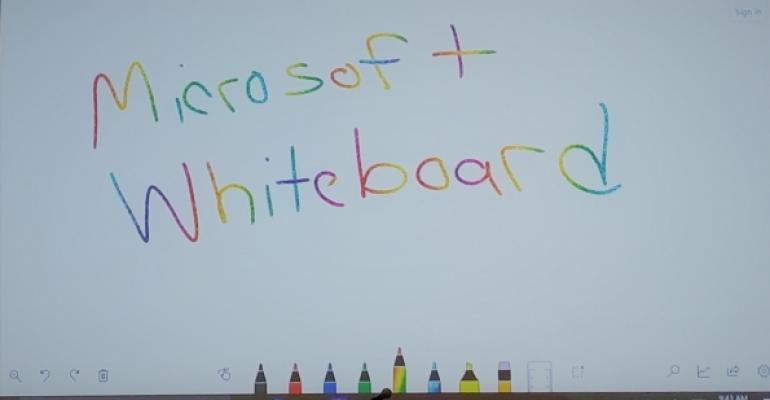 Today I sat in a session about Microsoft Whiteboard that was presented by two Senior Program Managers, Iam Mikutel and Angela Sze, who are on the Office Team for Whiteboard.

For those who might not know, Microsoft Whiteboard is exactly what you think it might be except it is of course a digital version of a whiteboard instead of a large physical one. It shares many of the features of a standard whiteboard including writing on the board to share ideas and concepts. However, where it differs is the ability to save work on the whiteboard directly instead of having to take a picture of the board to save for later access.

Microsoft Whiteboard is still a fledgling product and has just passed its second anniversary in June for when a small incubation team began work on the product for Surface Hub. Whiteboard is based on the great inking capabilities of OneNote with a focus on white boarding use for meetings.

Between that time and May 2017 the Whiteboard app became the most used app on the Surface Hub which makes perfect sense because Hub is meant as a collaboration tool and an electronic whiteboard makes that possible.

In May 2017 the team added real-time collaboration so that others, either in the same room or remotely, could also contribute to the white boarding work.

As of September 2017 the product team has grown by a factor of 3 and there are some new enhancements and features coming in the future but the team was not prepared to share those announcements today at Ignite.

They did share that one element of what is next for Microsoft Whiteboard and that is continuing the focus on collaboration and also using the power of the Microsoft Graph. That means making work created on Whiteboard available to all of the products and services in Office 365 including Word, OneNote, PowerPoint, Excel, Skype for Business, Excel, and Outlook.

If you would like to get early access to Microsoft Whiteboard to try out the new features just head to http://aka.ms/wbtalk and provide them your email address to get on the list.