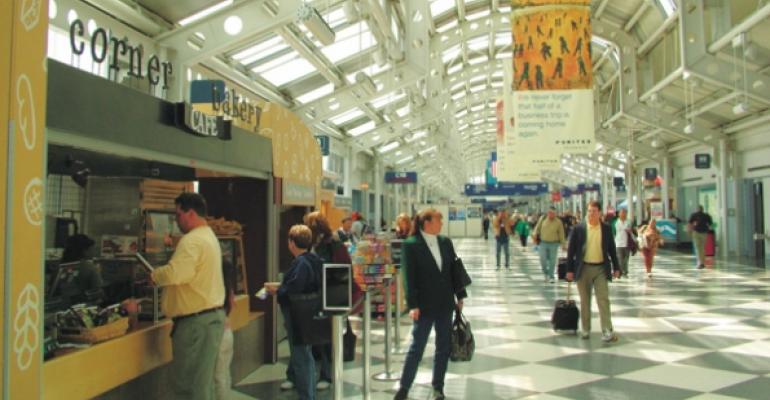 Businesses around the world are signaling that innovative new communications tools are making many pre-pandemic-era trips history.

(Bloomberg) -- Business travel as we’ve known it is a thing of the past. From Pfizer Inc., Michelin and LG Electronics Inc. to HSBC Holdings Plc, Hershey Co., Invesco Ltd. and Deutsche Bank AG, businesses around the world are signaling that innovative new communications tools are making many pre-pandemic-era trips history.

Take Akzo Nobel NV, Europe’s biggest paint maker, for instance. At its Amsterdam headquarters, Chief Executive Officer Thierry Vanlancker has spent the past year watching his manufacturing head, David Prinselaar, flap his arms, madly gesticulate and seemingly talk to himself while “visiting” 124 plants by directing staff with high-definition augmented-reality headgear on factory floors. A task that meant crisscrossing the globe in a plane before is now done in a fraction of the time — and with no jet lag. For Vanlancker, there’s no going back.

“Trips to drum up business could drop by a third, and internal meetings by even more,” he said in an interview. “It’s a good thing for our wallets and helps our sustainability targets. Our customers have had a year of training, so it’s not a social no-no anymore to just reach out by video... There’s an enormous efficiency element.”

A Bloomberg survey of 45 large businesses in the U.S., Europe and Asia shows that 84% plan to spend less on travel post-pandemic. A majority of the respondents cutting travel budgets see reductions of between 20% and 40%, with about two in three slashing both internal and external in-person meetings. The ease and efficiency of virtual software, cost savings and lower carbon emissions were the primary reasons cited for the cutbacks. According to the Global Business Travel Association, spending on corporate trips could slide to as low as $1.24 trillion by 2024 from a pre-pandemic peak in 2019 of $1.43 trillion.

Business travel has “forever changed,” Greg Hayes, CEO of jet-engine maker Raytheon Technologies Corp., said in a Bloomberg Radio interview in July. About 30% of normal commercial air traffic is corporate-related but only half of that is likely mandatory, he said. While the market may eventually recover, sophisticated communication technologies have “really changed our thinking in terms of productivity,” Hayes said.

Having saved billions from slashed travel budgets during the pandemic with only a marginal impact on operations, companies, banks, consulting firms and government offices will be hard pressed to explain why they’d return to their old ways. Kit Kat chocolate-bar maker Hershey said the pandemic showed that online meetings were a more efficient use of time and financial resources. Companies like Pfizer are grappling with questions about what one accomplishes with a trip that can’t be done virtually, Tina Quattlebaum, its director of global travel operations, said at the GBTA Mid-Year Virtual Summit in July.

“We don’t think business travel will ever return to 2019 levels,” said Will Hawkley, the global head of travel and leisure at KPMG LLP. “Corporates are looking at their bottom-line, their environmental commitments, the demand from employees for more flexible working and thinking: Why do I have to bring that back?”

That’s a blow to the airline and hospitality industries — already among the biggest casualties of the pandemic. Business travelers, who buy premium-class or more-expensive refundable tickets, rang in as much as three-quarters of airlines’ pre-pandemic profits while accounting for only 12% of seats, according to PwC. The hotels sector, which draws about two-thirds of its revenue from business travelers, could see a dip of as much as 18% by 2022 as virtual meetings replace 27% of corporate travel volumes, a Morgan Stanley study shows.

The world’s biggest airlines collectively lost a whopping $126 billion in 2020 and are set to lose another $48 billion this year, according to the International Air Transport Association, their lobby. As they wrestle with those losses and the huge debts racked up after coronavirus punctured a decades-long boom in travel, the last thing airlines need is corporate customers cutting back. Carriers like Lufthansa, Air France-KLM, Delta Air Lines and American Airlines, with thousands of staff and overhead to support, depend on business travelers returning.

“The effect of this structural decrease in business travel will be enormous for the industry, and especially for the airlines that are the most exposed to this category of traveler,” said Pascal Fabre, managing director in Paris for AlixPartners, a consulting firm.

Airlines are trying to stay optimistic. Delta CEO Ed Bastian said about 80% of the carrier’s large corporate clients have indicated that as much as 90% of their pre-Covid business travel will eventually return.

“I don’t expect we’re going to see a degradation in the aggregate of business demand over time,” he said in an interview. “The more people are connected in person, the more opportunities are created. I don’t see this being a significant body-blow to the industry as prognosticated by some.”

Traveling thousands of miles to meet with customers to discuss key issues across a table or over a meal made business sense before the pandemic and that hasn’t changed, said Warren East, the CEO of Rolls-Royce Holdings Plc, which makes aircraft engines.

“Covid-19 has definitely taught people that some of the mad regular dashes across the Atlantic hither and thither aren’t necessary,” he said, speaking at a net-zero event on June 17. “But when you peel back beyond that superficial analysis, you realize people were doing it because they thought it delivered real benefit to them.”

There may also be competitive pressures to keep flying, Air France-KLM CEO Ben Smith said in an interview. “I hear many of our corporate customers saying that the day they lose an account because they weren’t somewhere face-to-face will immediately bring them back to the way operations were before.”

Airlines are banking on a recovery sparked by pent-up demand after about 18 months when executives couldn’t visit customers — hopes that are being dented by the spread of the delta variant. Even if there is an initial burst of activity, it will start to stabilize and the structural change to business travel will become evident by around 2024, according to Fabre.

“In the past, it was seen as a good thing to go to the other side of the world to shake someone’s hand, but not anymore,” Augustin de Romanet, the CEO of Aeroports de Paris, which operates dozens of airports around the world, said in an interview. “Many things that have been done by conference call during the pandemic will stay that way, especially when it comes to far-flung countries. This will be for costs and the environment as well as people’s wellbeing.”

Company executives travel for many reasons — from business development and customer support to trade shows, conferences and meetings with local staff. Trips for intra-company activities will likely bear the brunt of the cuts “because client relationships aren’t at stake,” said AlixPartners’ Fabre.

“We have learned how to work, develop products, sign contracts without traveling,” he said.

Deutsche Bank’s global head of Investment Banking Coverage and Advisory, Drew Goldman, said that while the bank’s client-related business travel will return to about 90% of pre-pandemic levels, trips for internal meetings will probably be a shadow of what they were before — at 25% to 30%.

“We will probably review our travel budget,'' Societe Generale SA CEO Frederic Oudea said in an interview with Bloomberg TV. “People will be very happy to shake hands again, but probably for really the important situations.''

Volkswagen AG is making employees jump through hoops before they can fly. Internal booking software steers them toward alternatives to flying, the most carbon-intensive form of travel. They’re also asked to justify why they can’t conduct the business online. At French defense and tech giant Thales, “trips will be for longer and probably less frequent in order to optimize costs, environmental impact and wellbeing,” said CEO Patrice Caine.

In Singapore, United Overseas Bank Ltd., Southeast Asia’s third-biggest bank, plans to cut its travel budget by as much as 50%, and will limit trips to cases “where face-to-face interaction is essential,” said Dean Tong, head of group human resources. On New York-based Marsh & McLennan Cos.’s second-quarter earnings call, CEO Dan Glaser said, “companies, not just Marsh McLennan, will travel with more purpose and will be more thoughtful about traveling.”

Sophisticated technologies are enabling companies to do things they never imagined doing remotely. At French tire maker Michelin, new tools are already eclipsing the automatic reflex to make a trip, CEO Florent Menegaux said in an interview. The company recently used a drone for a virtual visit of its Campo Grande plant in Brazil by the top manufacturing brass in France. “We start machines remotely, have used drones to visit factories and train people from home,” Menegaux said. “We will continue to travel because human bonds are absolutely necessary to our activity, but we will most certainly have an overall reduction of about 20% to 30% in our travel costs.”

“We won’t travel as much,” Clark said. “I think it’ll be more when we have to travel people will travel, versus, it’s nice to travel.”

For most companies, cost savings will be the primary driver to scale back, but carbon-footprint worries and employee wellbeing are not far behind, Fabre said.

Businesses globally are under pressure from investors and regulators to shrink their CO2 emissions. The European Commission rolled out an ambitious climate plan in July to force all industries to shift away from fossil fuels. Aviation has long been a target even though it accounts for only about 2.4% of global human-induced CO2 emissions. That’s because the sector was growing rapidly before the pandemic and has other negative effects on the Earth’s upper atmosphere.

“Companies have acknowledged that reducing the level of flights is one way of reducing climate change,” said Andrew Murphy, aviation director at advocacy group Transport & Environment. “For the next 10 years, the best way to reduce emissions from aviation is to fly less.”

Airlines are providing companies tools to blunt the impact of CO2 emissions with carbon offsets and refreshing fleets with newer, more efficient planes. But with the tons of carbon dioxide they spew, airlines can’t do much to show that flying is a sustainable way to get around. Hydrogen-fueled planes and electric commercial jetliners are decades away, and alternative aviation fuel isn’t widely available and jacks up ticket prices.

Air France, for instance, is developing its so-called leisure-business category for passengers who buy premium-class tickets for holiday travel, according to Steven Zaat, the group’s CFO. Thirty-two Air France 777s are fitted with “quick change” systems that allow the airline to reduce the size of its business-class cabin. The airline is still confident about a rebound in business travel, but “we can always reconfigure our planes if necessary,” Zaat said in a Bloomberg TV interview.

While airlines grapple with the possibility of fewer business customers, some of those clients are happy not to be zipping around the world all the time.

“A nice side effect of fewer long-haul business trips is less stress for the people who fly,” Hans-Ingo Biehl, the head of VDR, the German Business Travel Association, said in an interview. A study by the Baylor College of Medicine found frequent fliers have the same cancer risk as obese people. Also, companies have found that jet lag hurts productivity.

“There are a lot of myths and fantasy about travel, but it’s really very tiring,” said Michelin CEO Menegaux. “We should do it only when it’s absolutely necessary. I travel a lot and I can tell you it’s physically grueling and takes a heavy toll.”