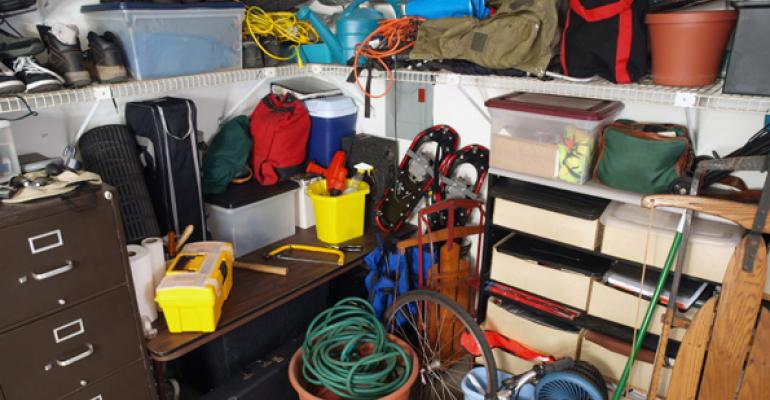 If you don't use or need it, why are you storing it?

Humans are, by nature, packrats. And while I’m sure there are exceptions—and yes, I’m jealous if this is really true of you—most of us, even those who try to behave otherwise, inevitably fill up all the space we have, often with items we don’t ever need.

I’ve spent years now trying to overcome this trend. While the overreaching desire for change is certainly pragmatic, some it is more short-term, while some is long-term. On the short-term front, my family swaps homes each year, most often with another family from Europe. And allowing people you usually don’t know to spend weeks in your home has a way of focusing your attention on the clutter. So each year, we intend to clean out ever more clutter in a meaningful and deliberate way. And each year, we do a bit of that, and then have a last minute spaz in which we toss a lot of clutter into bins and put the bins in the cellar or in closets.

Long-term, my wife and I interested in a simpler, smaller lifestyle. Today, we have kids in school and various needs around the size of the home (which, by the way, is quite modest by U.S. standards), the car, and so on. But as enthusiastic travelers, we’re interested in a more mobile lifestyle in the future, with a much smaller living space, hopefully no car, and much, much less “stuff.”

(Our interest in this future was renewed by Mary Jo Foley, who co-hosts Windows Weekly with me. On a recent trip, she was telling me about her pragmatic policy of taking something out of her small New York City apartment every time she brought something in, and that this way of thinking of things helped clarify what was really important, and what wasn’t.)

With all that in mind, welcome to my bedroom.

What you see here are two bins full of clothes. My clothes, ostensibly, though I haven’t worn any of them in years. I mentioned previously that, before each home swap, we bin up items we don’t want cluttering up the house while we’re gone. So each summer, I toss the dresser-based clothes I’m not bringing to Europe in these bins and tuck them in the back of the closet.

I’ve noticed something about these bins. I don’t ever need any of the clothes in them. Like, ever. In fact, those bins—which, yes, are literally still sitting in the corner of my bedroom as I write this—aren’t from last year’s home swap. They’re from the 2011 home swap a year earlier. Those clothes have been sitting in those bins for a year and a half. I literally don’t need them.

So I’m going to throw it all away. Yes, I’ll look through the clothes one last time, because you never know. But this is clutter and a waste of space. It’s unnecessary, but it’s something I’ve held on to. You know, just in case.

And while I will spend a bit of time in the future writing about some of the ways in which I can and will be converting physical items into more portable digital items, the simple truth is, clutter is clutter. And if you’re anything like me, you’re storing too much crap that you’ll never ever need again. And this is true whether it’s on your PC, a centrally-located store on your home network (home server, server, PC, NAS, whatever), or in the cloud.

And I really do think it’s worth spending the time to figure out what it is that you’re storing, and where, and when you can either permanently delete as much as possible to reduce your storage needs or at least foist it off to what I think of as “deep storage” that you will most likely never access again.

That deep storage can be cloud-based—like Amazon’s Glacier service or similar—or it can be as low-tech as one or two external hard drives that you toss in a safe deposit box or some other location that’s not in your house. (And yes, that’s important.) Your aversion to risk will determine what you can and cannot do. But I’m always amazed by how much time, energy, and money we waste micro-managing our digital content. Part of this Zero Data initiative, for me, is ensuring that I’m not babysitting storage any more. I want technology to work for me, not vice-versa.

So far, I’ve been pretty general, and haven’t offered up much in the way of specific strategies, let alone specific products and services, or what I’m doing and using. That will come in the near future. But there are hints to what I’m doing all over my writing. Last year and beyond I wrote a ton about storage, sync (which is key, I think), cloud/online services, and so on, and the path is pretty clear. What’s needed is some hard thinking about what it is you really need and then taking the tough steps to get there. As I noted in the first article in this series, Zero Data: The Hardest Part is Saying Goodbye, that first step is often the hardest. But you need to get over that hump before you can reduce the clutter, both physically and digitally. And this year, I’m all about doing both.

Next up: Strategies for sync, storage, and backup