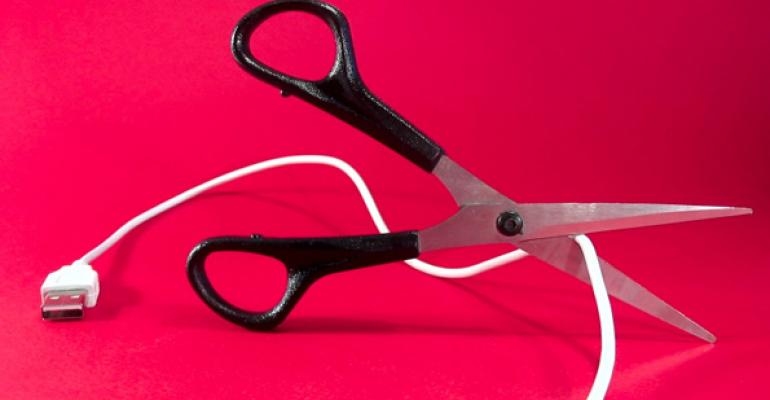 I had hoped to move on to examining specific aspects of my “zero data” initiative and look at strategies for such things as books, music, and documents. But I’m surprised by a fundamental disconnect that I see repeated in emails, article comments, Twitter, and elsewhere, where people can’t seem to grasp that a single PC no longer sits at the center of the computing and data experience.

This is a precept of cloud computing, and I think of it as “PC free,” though that name, like “zero data,” isn’t necessarily perfect. The point, however, is that your PC (or home server, or whatever) is not the nexus of everything you do. The master copy of our data is in “the cloud” (or, more properly/likely, in various online services, depending on content type). The truth is in the cloud, as they say.

This notion of treating a PC like any other device, as a client that accesses your online data, is not new. And while there are various ways to look at this, it was probably never more eloquently explained than it was by Steve Jobs, who in 2011 introduced Apple’s iCloud service. “We’re going to move the digital hub, the center of your digital life, into the cloud,” he said. “Because all these devices have communications built-in, they can all talk to the cloud whenever they want.” Jobs referred to this scheme as one of Apple’s great insights, though again Apple is hardly alone in moving to this model.

PC free speaks to the notion that you should be able to pick up any device—a traditional PC, a Windows 8/RT-powered tablet, an Android handset or tablet, an iPhone or iPad, a Windows Phone handset, or whatever—and immediately access your data, online, in ways that make sense on each device.

PC free doesn’t mean “no PC.” It means that in the modern world those other devices are not subservient to the PC. They do not require heavy sync applications, or for you to manage everything from the PC and then sync/copy the content you want to the devices so you can access it on the go.

Looking at the Microsoft ecosystem specifically, there are some obvious PC free products and services. You might use Outlook, not to store everything locally in some crusty PST file, but to access your online email services and gain access to your email, contacts, and calendars just as you would on a Windows Phone or iPad. You could use Xbox Music to access your cloud music collection, with the same playlists and SmartDJ mixes, on your PC, Windows Phone, or Xbox 360 (theoretically; this one’s a work in progress). You might use SkyDrive sync your important documents to all your PCs and being able to access that same content from any mobile device as well.

In many ways, however, Windows Phone is the prototypical PC free solution in the Microsoft ecosystem in the sense that it was designed from the ground up to be used in this fashion, though of course the first few versions were released too early to fully capitalize on the PC free way of doing things. That is, Windows Phone 7.x relied on PC sync to accomplish a few things that couldn’t happen otherwise, including full fidelity photo acquisition, media (music, videos, podcasts) sync, and the like.

Microsoft removed most (but not quite all) of the PC free limitations in Windows Phone 8, and as such it seriously constrained what’s possible with the PC sync app (and desktop application) it created for this system. This move confused and even angered some users, because they were used to the old-fashioned, USB-tethered sync model used by the previous generation’s Zune PC software. This is an example of the disconnect I referred to: With Windows Phone 8, Microsoft is conforming more closely to cloud computing “zero data” and “PC free” ideals. And the push-back is caused, in part, by a resistance to change.

(Only in part: Some of the PC free functionality in Windows Phone 8 is half-baked. For example, only users in the United States can manage podcasts over the air, directly from the device.)

I don’t have much patience for this kind of thing, since I’ve approached Windows Phone from the opposite (or what I would call “correct”) point of view, in that I felt that Windows Phone 7.x didn’t come close enough to the PC free vision, and I wish Windows Phone 8 completely sealed the deal. It’s close but not quite complete. And while I’m confused why anyone would adopt Windows Phone and not feel this way, others, stuck in the old-fashioned way of doing things, disagree.

It is this friction between the new and the old that triggers the most angst around cloud computing. And if you think about it, the issues I raised in Zero Data: The Hardest Part is Saying Goodbye are essentially the same argument, though in that case I was referring more to physical media and hardware than to the actual data bits. But it’s the same thing: You can manage this stuff locally and push it out to clients yourself (slow, unreliable) or you can manage it in the cloud and sync it automatically to clients (fast, reliable).

I struggle with resistance to change every day. Witness my Going Pro series as perhaps the most recent public example. You will too: Change is hard, especially in this age of rapid change. But moving towards a PC free existence is, I think, is a no-brainer. It’s not always 100 percent achievable. But like zero data itself, it’s a goal to strive for.

OK, that’s probably enough theory. I’ll start exploring specific solutions around media, explain what I’m doing, and provide, if not a recipe for your own changes, at least some food for thought.