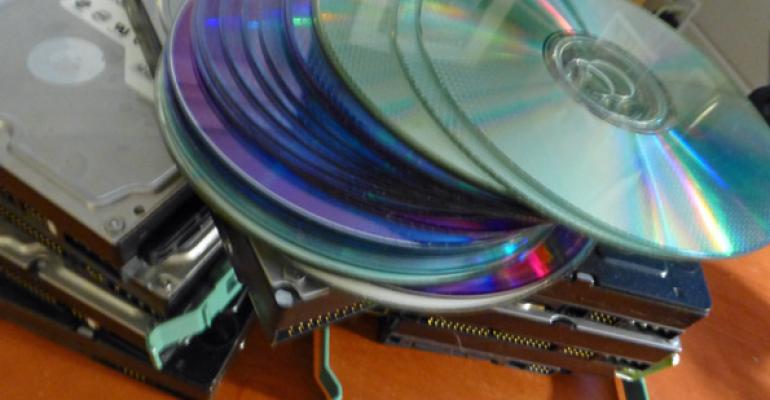 If you listen to the podcasts on which I appear, you know that I’ve been talking about the concept of “zero data” lately, where I hope to aggressively decrease my need for local storage and move as much of my documents, music, photos, videos, and other data to the cloud as possible. In preparing for this move, I’ve had to confront dozens of old hard drives and hundreds of backup optical discs. And sometimes, it’s hard to say goodbye.

This all dates back to 1999, when I moved my family back to Boston from Phoenix after the birth of our first child. One of the first things I did upon arriving back at my parents’ home, where we lived until we bought a house in the area, was wipe out my PC and reinstall whatever version of Windows I was using at the time. Unfortunately, I formatted the wrong partition during Setup and deleted, among other things, my only copy of my Outlook-based email file (the dreaded PST), losing three or so years of email in the process.

So I got the backup religion.

Since then, I’ve tried to warn people, repeatedly, about not being a statistic. That is, rather than lose something valuable and then figure out a backup plan, do the right thing proactively. Hopefully, this has made a difference for a few people. But in my experience, it often takes a disaster like the one I brought down on myself to inspire people to do the right thing. If this does (or did) happen to you, hopefully what you lose is even less important than email.

Regardless, my serious data backups start, not coincidentally, in 1999. (I do have older backups, too, though, including an intriguing set of backups that are labeled “Floppy Archives 1993-1998” as well as numerous ZIP disk, tape, and other backup formats I long ago copied to a home server.) In 1999, I was all about the CD-R, of course, but as technology improved, I moved along to DVD-R, DVD+R, and DVD-R/DL. I never bothered with Blu-Ray backups because by the time that that format arrived, I was already using servers and then home servers to store my data redundantly.

Back then, “redundant” meant regular backups to what were then very, very expensive 1 TB external disks. I recall convincing my wife that we needed two of these monsters—Firewire 800-based Lacie Big Disks that cost $999 each and required a special card for my Windows Server-based server—so that we could keep one at home and one “off-site.” Which meant, go figure, at my parent’s house. Once a month, I’d wipe out the local copy, re-copy the entire contents of our data set to the drive, and then swap out the disk at my parent’s house.

(As an aside, my wife quickly interrupted what I had planned to be a very detailed explanation about why we needed $2000 worth of storage with, “if you know we need it, just buy it.” But what it boiled down to was a realization that the both of us were keeping all of our important personal and professional data on hard drives on a single server, and that if there was a theft, fire, or hard drive disaster, we’d be in a lot of trouble. My wife gets it.)

So I’ve been really good about backing up, especially since 1999. The downside to this attentiveness is that when you flash forward almost 14 years, I’ve also collected a rather unbelievable collection of both optical discs and hard drives. I can’t and won’t just throw these away because they all contain personal data. It all needs to be securely erased or physically destroyed first.

I’ve been planning on doing this for a few years. And given the home swaps we do, in which other families stay in our home for about three weeks each summer while we’re off (usually somewhere in Europe) staying in their home, I’ve had to figure out a way to store this stuff securely while I procrastinated. But this year is the start of Zero Data. So I’ve dug the discs and drives out of storage, dumped them on my office floor, and have started to sort through it all.

For the optical discs, my original plan was to wait for that once-a-year event in which my town lets you drive down to some facility and shred discs for free. After missing it for three years in a row, I finally decided that I would simply buy a disc shredder and do it myself.

For the hard drives, I had long ago purchased an excellent USB 2.0-to-SATA/IDE converter, which lets you connect internal drives of any kind to my PC via USB and then wipe them out securely. It takes a long time to do this, but it works.

I mean, how do you destroy a disc that contains movies of your then two-year-old son? How do you destroy home movies, personal photos, or even less personal data from over a decade ago, if only because it has some—at least to you—historical significance?

For starters, you need to remember than none of the stuff on these discs and disks isn’t already on my home server. It’s all backed up to the cloud, to Crashplan at least, and in the case of photos to other services as well.

But confronting these items, it’s hard not to pop a disc in the drive of my current PC—you have to think the next one won’t even have an optical disc—and watch a few minutes of a video, or look at a few old photos you’d forgotten about. There’s my son Mark, on a swing at Houghton’s Pond. Two, maybe three years old tops.

But you need to get over this. Breaking your connection to physical media—physical content of any kind, really, as this includes books, audio CDs, movie DVDs and Blu-Rays, photo albums, and so much more—is one of those societal and generational things that will not make any sense whatsoever to our children, but is in fact hard for people of a certain age. Saying goodbye to “stuff,” ultimately, is harder than the physical act of destruction. You almost have to steel yourself for it.

Regarding the particulars, I ended up getting a disc destroyer rather than a disc shredder; it damages discs on both sides, leaving the underlying data unreadable. It’s louder than hell and time consuming, but I was able to churn through a few boxes of discs in a couple of days. In fact, I spent much of Saturday finishing this up. You know, between short interludes where I verified one last time that I really did have that copy of the impossibly cute home movie from 2001 somewhere on the server. Yep, it’s safe.

Hard disks are a bit trickier, and I’ll be working on that one for some weeks (or even months) to come, I bet. The USB-to-hard disk tool I use works well, and it works with any type of hard drive I would have ever used in a server or home server. I have disks dating back many years—one is a piddling 20 GB IDE drive that was made in January 2001, fully 12 years ago (!!)—and securely erasing hard drives is very, very time consuming. In fact, I’m looking for recommendations in this area: I have yet to find a secure erase utility that I really like.

Some disks are unreadable and they simply won’t work. These will need to be physically destroyed, and while I’m not looking forward to a weekend in the garage with a sledgehammer, I could make that happen. But they need to be destroyed one way or the other. Now that the optical discs are pretty much done, I will turn my attention to that.

But there’s so much more.

Looking ahead, I’ve still got a home server with several terabytes of data, most of which is irrelevant to my daily life. And I’ve got a Windows 8-based “server” (really just a PC) with much less data that I’m testing to see whether it makes more sense from a home-based media share perspective. (Hint: Yes, almost certainly.) But reducing my local data usage is still going to require a lot of work, and a lot of planning. I’ll be turning my attention to that data, and the cloud services that can replace the local storage, next.