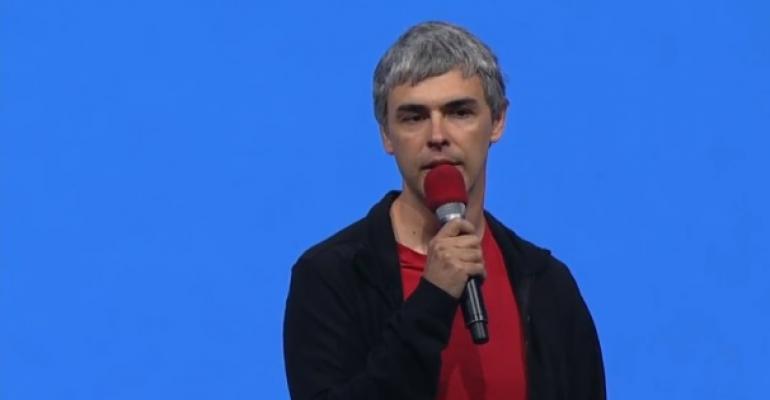 Google I/O 2013, Day One: A Flood of New and Improved Google Services

Google turns on the fire hose. This is how you hold a tech conference, folks

Google--Microsoft’s biggest platform competitor—launched its annual Google I/O developer show today and as usual the firm made a number of fascinating announcements that had absolutely nothing to do with developers. Google I/O always presents a fascinating peek into what Google is doing at this moment in time, and this year’s show hasn’t disappointed so far. Indeed, it’s almost overwhelming.

To be clear, since this seems to confuse some people, I’ve always felt it was important to pay attention to the competition no matter what your level of dedication is when it comes to Microsoft’s products and services. In my own career, this meant paying attention to such things as the Mac, Linux, and Apple’s iOS platform over the years. But in recent years, increasingly, this attention has turned to cloud services and devices. And that means Google.

(By the way, it’s not coincidental that Microsoft has reoriented itself as a devices and services company. See the parallel? This is exactly the way that the industry is going.)

Google makes the dominant devices platform, Android, which is a near-monopoly in smart phones and is now the majority player in the tablet space as well. When it comes to devices, there is Android, and then there is everything else. Even if you consider notebooks as devices, and I think you should, Google gets about 60 percent of the market and the rest is split pretty evenly between Apple—iOS + Mac—and Microsoft Windows. Google matters.

Google is obviously a major player in the cloud services world as well. It provides the dominant search service, of course, but also offers a broad array of other useful consumer- and productivity-oriented cloud services like Google Apps and Docs, Google+, Google Play, and many, many others. Here, too, Google matters.

From a competitive standpoint, Google is a tough nut. Where Microsoft is opening up its products and services to iOS and Android, Google frequently serves the PC world only with web-based solutions, which will ease the transition of users away from Windows to other platforms like Google Android or Chrome. But it very often creates native mobile apps for both Android and iOS. Almost never for Windows, let alone Windows Phone. I feel this is purposeful and not completely related to market share/usage: Google wins when Microsoft loses.

With that as background, let’s take a look at what Google announced today at Google I/O and make some quick comparisons with competing solutions, when available, from Microsoft and others. It’s a lot of stuff.

Big numbers. Google announced that it is closing in one billion users: There have now been 900 million Android device activations, excluding the China market for some reason. By comparison, Microsoft has 1.4 billion active Windows users and 1+ billion Office users. Google also announced that there have been 48 billion Android app installs. (Apple apparently has 50 billion, by comparison.) There are now 750 million active Chrome users. Over 1 million web sites uses Google Maps data.

Developer tools and services. Speaking of developers, it appears that Google is trying to end the reliance on Eclipse and is creating a Visual Studio-like development environment for Android called Android Studio. They also announced a lot of interesting services for developers around such things as beta testing and staged app rollouts, language translation, and more.

Google Play Store. Google’s content store is being updated for tablets with a nice tile-based design that makes better use of the on-screen real estate. (Microsoft could learn from this.) It’s smart enough to showcase apps that are optimized for the device the user is using to view the store. There’s even a laptop view when you hit the store from Chrome.

Music subscription service. As rumored, Google is introducing a music subscription service called Google Play Music All Access that will take on Spotify, Pandora, and even Xbox Music Pass, though it of course only works on Android and iOS devices and the web. It’s priced at $9.99 per month and will come with a 30-day free trial, same as Xbox Music Pass. (If you start a trial before June 30, you only pay $7.99 per month.)

Samsung Galaxy S4. Starting in June, Google will start selling the latest Samsung “hero” phone, the Galaxy S4, via its Google Play Store for $650 unsubsidized. But this isn’t a stock S4. Instead, this version of the device comes with the “Nexus” user experience, not Samsung’s version. It will work on T-Mobile and AT&T in the US and offer LTE networking support. On the bad news front, it has on 16 GB of internal storage. This would be an interesting approach for Microsoft to take for a Surface Phone, by the way: Skin and configure the current Nokia hero phone.

Chrome. Google’s web browser is being updated to support touch, which is already available in the Metro version of Microsoft’s Internet Explorer. It’s also being updated with better performance, which is obvious, and cross-device payment info sync for Google Payments.

Google Play for Education. A version of the store aimed at making Google’s devices and apps more affordable for educators. Launches in fall 2013.

Google+. Google’s controversial social network service is getting 41 new features, Google says, and a graphical redesign that many have compared to Pinterest. It’s tile-based, with flipping, animated cards.

Google Hangouts. Once just a Google+ feature, Hangouts is being rolled out as a standalone app on Android and iOS, and via the web. You can have text, video and photo (?) conversations with others. Obviously a Skype competitors.

Photos. Google is suddenly serious about photos again. It wants users to manage, store, and share photos on Google+, not on Facebook or other services. They’re offering some interesting services here, including an automated service that finds your best photos and presents them as a highlight reel and photo auto-enhance. A new feature called Auto Awesome—yes, really—will take multiple similar photos and stitch them together so everyone is smiling in the shot. Lots of comparisons to Microsoft and Nokia stuff here, obviously. But the Google stuff is obviously pulling ahead.

Search. Lots of new search features, and let’s just admit that this is an area where there is Google and then there is everything else. You can search Google for your vacation photos, travel plans and restaurant reservations now. A new Converse feature adds voice to Google Search everywhere: on devices, on the web. I previously pegged Google Now as one of the more innovative things come out of this firm, and Google today announced a lot of new features including reminders and many new cards (public transit cards, books, video games, and TV shows). If only Android phones had a dedicated Search button as on Windows Phone. :)

Google Maps. Major updates here as well, all coming this summer. There’s a new iPad client and an updated version for all Android and iOS devices. The web version of Google Maps is going all vector and is beautiful. A new feature called Explorer copies Microsoft’s Bing Local Scout. Maps offers automatic traffic rerouting, integrated Zagat reviews, offers from places like Starbucks, more Street View countries, and a way to keep zooming out and see the earth from space. For some reason. Still, heady stuff, and there’s a lot more going on here.

Like I said, a lot of stuff. And that was just day one. Yikes.