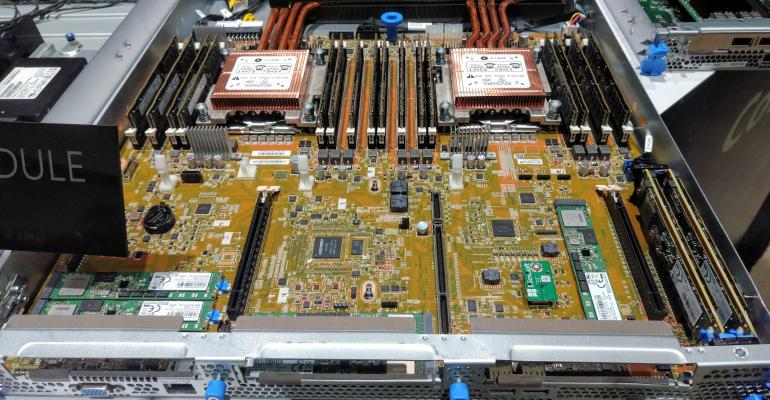 Designed for mission-critical applications like SAP Hana, it may suck more workloads out of enterprise data centers and into Azure.

The historical reluctance to move to the cloud tier-one workloads, such as SAP or mission-critical databases behind key business applications and systems of record, has been as much about performance as it has been about security.

The new Azure Ultra Disk Storage managed disks use NVMe to offer sub-millisecond latency for I/O-intensive workloads like SAP Hana, NoSQL, OLTP databases, and other kinds of guaranteed-write sequential workloads and transaction-heavy systems that have been moving into the cloud, but slowly.

These are 4K-native data disks that initially only work with the premium storage DSv3 and memory-optimised ESv3 VM instances. ESv3 is what you’d pick if you were building relational database servers, large caches, or in-memory analytics systems with tools like Hadoop, Spark, Hive, Kafka, or HBase. (Azure’s storage-optimized instances already have directly mapped local NVMe storage.)

According to last week’s confusingly titled blog post by Microsoft “announcing general availability” of the service, it is now available by request in East US 2, North Europe, and Southeast Asia Azure cloud regions. But “the general availability price” kicks in in October, which appears to be when Microsoft expects to launch it as a typical cloud service.

Some customers have been already been using the service for workloads like PostgreSQL. Financial trading education platform Online Training Academy is using it to scale applications to the cloud, and Tokyo-based gaming company Sega said in the announcement that the service allowed it to “seamlessly migrate from our on-premises data center to Azure.” (Which may explain why Asia is one of the initial regions.) Microsoft has yet to say how much it costs.

You can pick capacity from 4GB up to 64TB and configure bandwidth and IOPS separately from capacity, from 256KB/s up to 2GB/s throughput and from 300 IOPS/GB to 160,000 IOPS per disk. That means you can achieve the maximum IOPS for a virtual machine with a single disk rather than having to stripe multiple disks (but you do need to set the disk IOPS below the VM IOPS limit). You can also dynamically tune performance without detaching the disk or restarting the VM (although it may take up to an hour for performance settings to change).

That also comes with high durability, because it’s based on Azure’s Locally Redundant Storage technology, which saves three copies of data in three different racks in the same availability zone. When an app writes to an Ultra disk, doesn’t get confirmation that the data has been saved until it’s been replicated into the LRS system.

A Flash Array in the Cloud

As Russinovich explained at last year’s Ignite, the hosts these disks are mounted on know which servers in the Direct Drive cluster have the relevant pieces of the files. “So [Ultra Disk] can go talk directly to them to write and read data rather than going through the load balancers, and the front end, and the partition table servers that even Premium SSD traffic has to go through.” With those extra steps out of the storage path, Ultra Disk can deliver the kind of performance you’d expect from an all-flash enterprise storage array with non-volatile memory caches, four-copy durability, and RDMA – but in the cloud.

Sponsored Content
Maximizing the value of the cloud with Quest
Feb 11, 2020