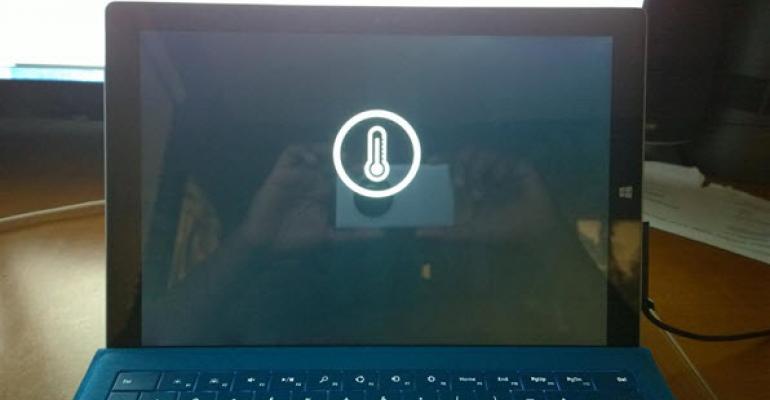 When Microsoft released the initial run for its latest tablet, the Surface Pro 3, the only models available were the lower-end i3 and i5 models, with the higher-end, i7, to release in August. At that time, some users reported that the tablet would get warm and the revamped fan would run, but only during screen intensive operations. Now that the i7 models have been made available, some users are reporting severe heat problems.

A growing thread on in the Microsoft Surface forums tells tales of customer problems with the latest version of the Surface Pro tablet. What may have been just a warm sensation with the earlier models, has now turned into a full blown excessive heat problem for even the simplest things. Just surfing Facebook, playing YouTube videos, or simply applying a newly released firmware update can overload the tablet and cause it to shutdown with a temperature warning screen. For some, when the tablet is rebooted after it cools down, pixels on the screen are reported to have burned out due to the heat condition.

The forum thread details how users have repeatedly exchanged impaired units, only to experience the same issue with the new one. Some are on their third and fourth exchanges.

One individual suggested a fix which involved opening Task Manager and shutting down a constantly running Windows Installer service, but this seems to be just a temporary fix and not a long-term solution. The issue seems to be widespread for certain i7 models in a specific batch or lot number, and a few are reporting similar problems with the i5's.

If you're experiencing this issue with your Surface Pro 3 (any model), a user on the forums is moderating his post to include newly reported problems. The list is growing, with almost 60 user reports so far and if you are affected, I highly suggest you visit the forum thread to report your issue:

UPDATE: Since posting this article this morning, I received a statement from Microsoft on the issue. The company is aware of the situation, has identified the issue, and is prepping an update to fix the problem.

“The Surface Team is aware of a very small number of Surface Pro 3 Intel® Core™ i7 devices that are temporarily restarting and incorrectly showing a "Thermometer Gauge" icon while attempting to boot up. Our investigation reveals that the system is triggering this event sooner than it should for some people, only when the device restarts, and this does not occur when the device is booted and running. We have an update that will address this that will be ready for our customers as soon as possible.

The i7 version of Surface Pro 3 is a first-of-its-kind tablet delivering i7 processing power in a thin and light package. As such, the increased power calls for the fan to spin more regularly and at higher speeds – and for the unit to run slightly warmer. If customers have any questions or concerns, they should contact Microsoft Support.”
– Microsoft spokesperson